According to PointData’s “Lay of the Land” report, coastal and inner-city suburbs continue to outperform outer suburbs north and south of the city while the foothills and Adelaide Hills are also performing well.

A snapshot of the past five years, included in the report, also shows strong growth along the coast between Brighton and West Lakes as well as in many of the leafier inner-city suburbs.

However, the growth in more affluent areas in comparison to the traditionally more affordable outer suburbs is increasing the gulf between the best and worst suburbs.

Overall, 70 per cent of the statistical neighbourhoods in the report grew in value in the six months to December with 33 per cent improving by more than. 2.5 per cent on an annualised basis.

“In March, many commentators predicted that the coronavirus would result in an up to 7 per cent decrease in property values whereas the opposite has happened,” PointData CEO George Giannakodakis said. 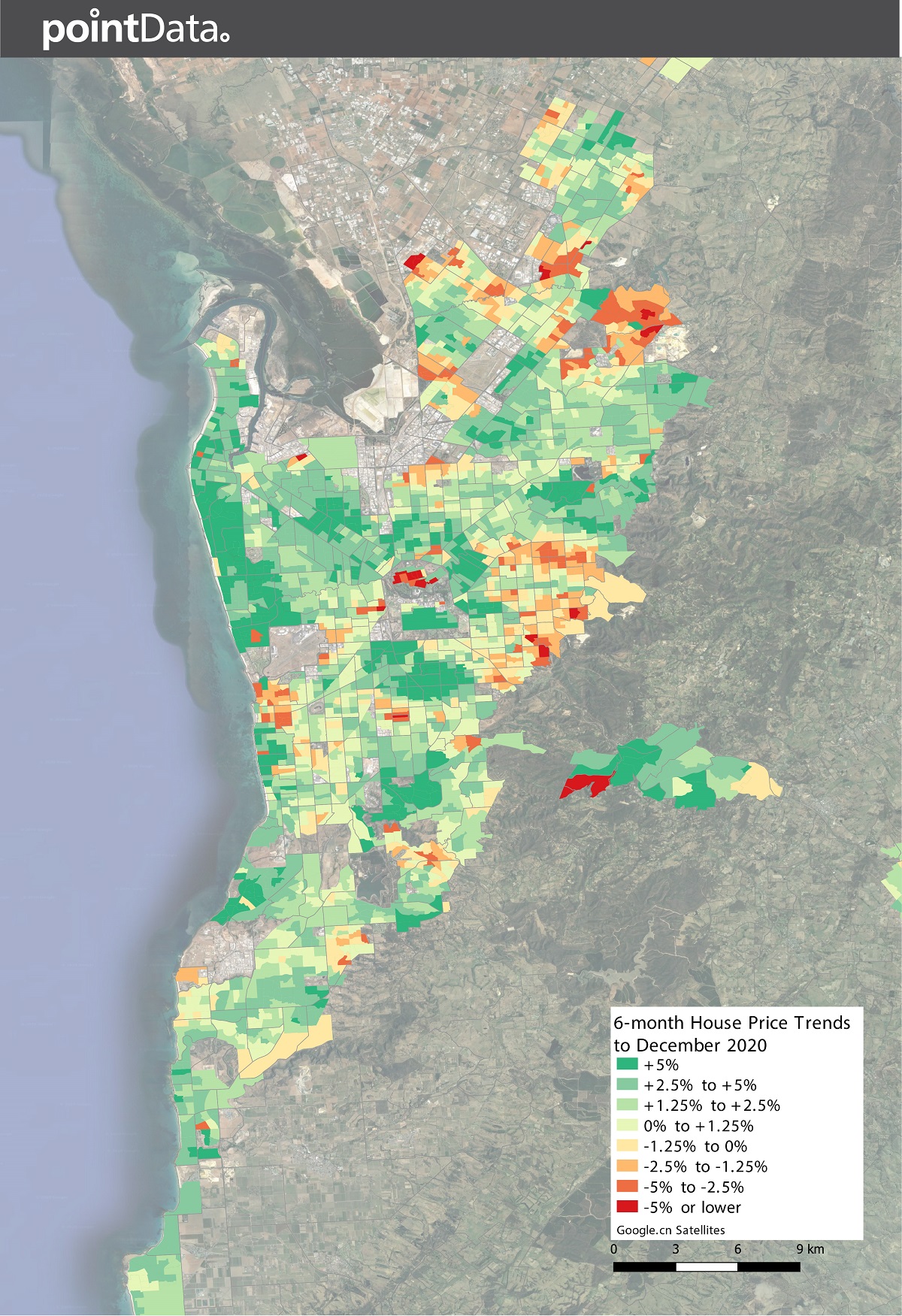 “There has been a gradual recovery and a strengthening of the local market.

“Larger areas of Adelaide are now accelerating at a faster rate of growth, which is great news.”

The report also showed that the number of active listings over the six months was down by more than 10 per cent across the six-month period compared to the five-year average, putting upward pressure on prices due to a shortfall in supply.

Bank SA’s Data Snapshot, released this month also shows that new housing lending reached a record high in October, with the value of new loans up by 15.1 per cent over pre-pandemic levels in February and up 23.3 per cent on the same time in 2019.

This was led by owner-occupier loans, up 42 per cent with investor lending up 29.5 per cent since the market bottomed out in May this year.

Giannakodakis said the lack of supply and increase in loans was having a positive effect on property values that should carry on well into next year.

“We’re seeing some pretty sharp rises in lending rates too.

“Some of that comes through construction industry stimulus such as the HomeBuilder grants and also the availability of very affordable finance as well.

“We’ll probably see the peak of that showing up in the March to July quarter and beyond.”

The five-year trend map included in the latest PointData report shows the whole of Adelaide has increased in value over the past five years on an annualised basis and Giannakodakis said that was likely to continue for some time. 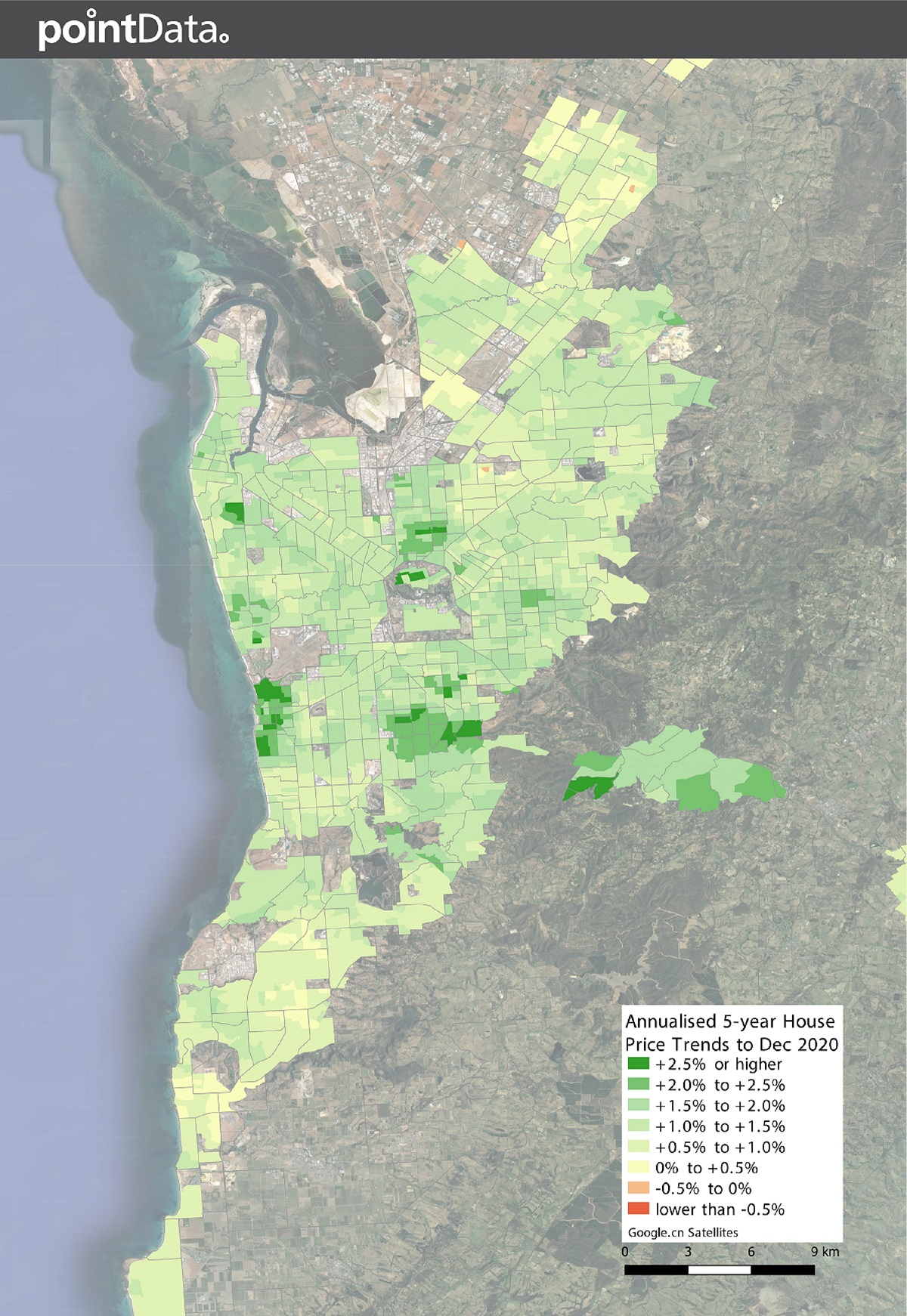 “If you look at those areas that have done well – Mitcham, Prospect, Holdfast Bay and Henley Beach – it tends to be good quality established properties, new stock that is of high quality or properties near the beach,” Giannakodakis said.

Some areas that had done well across previous periods, including in the five-year data, have given back some gains in the past six months.

These suburbs include Glenelg North, Upper Sturt and North Adelaide.

“There seems to be a flattening out of those markets – they might have reached a peak for now but they have traditionally done well over the five years,” Giannakodakis said

“The southern and the northern areas are doing OK but as you move closer to the city it’s increasing in some areas at 2.5 per cent per annum so over five years that’s quite a substantial rise.

Looking ahead to 2021, Giannakodakis said the high lending figures, strong interest in government incentives such as HomeBuilder and the expectation of continued low interest rates meant there was nothing to suggest the trends would change in a negative way.

“We’ve managed COVID well, the vaccine is on the horizon, all of the grants are playing out and that will continue,” he said.

“Perhaps when the grants come to an end we might see a flattening of that demand but it’s hard to say when but it could be towards the end of next year.”