Transport Minister Corey Wingard last week revealed that the gatehouse on the corner of Cross Road and Fullarton Road, built in 1890 and linked to the University of Adelaide’s Urrbrae House historic precinct, would be bulldozed to make way for road-widening.

Wingard told The Advertiser that demolition of the distinctive, 1890 building was the only option as a government-commissioned feasibility study had found that relocation was not feasible, due to expense and concerns the shift would not be successful.

However, the report by FMG Engineering clearly stated the opposite – that relocating the historic building to a nearby site on the Waite grounds “was feasible” – and detailed how it could be done to minimise structural damage.

A second report from a specialist moving firm also said relocation was feasible, and quoted an estimated $900,000 cost.

But in evidence before parliament’s public works committee yesterday, DPTI executive director of transport project delivery Jon Whelan said the cost to taxpayers would be much higher, and a variety of options for the site had been considered.

He said that while the quoted cost to move the building to a nearby site was “894,000 plus or minus 10%… purely a pickup and position, pickup and delivery cost”, “all the pre-work, post-work is in excess of three million (dollars); the risk of that being not successful is also a greater risk”.

Whelan said that “everything other than picking the building up and moving it to its final location, would be at the cost of the state”, with an “extensive amount of conditions” including “preparing the road decommissioning services, any damaging to existing service”.

“Removing the vegetation. Getting permits or the allowance to get machinery from interstate or overseas… Any demolitions to the existing structure itself, like there’s some bits in there that have to be removed. Then there’s removing obstacles around the buildings to make safe, provide written clearance to allow them to access the property, remove all rubbish, install all compliant site amenities, toilets, crib rooms, and then undertake all the necessary repairs, and in there they took no risk on the actual existing structural damage to the building itself. ”

Removing the chimneys was also an issue, as was salt damp. 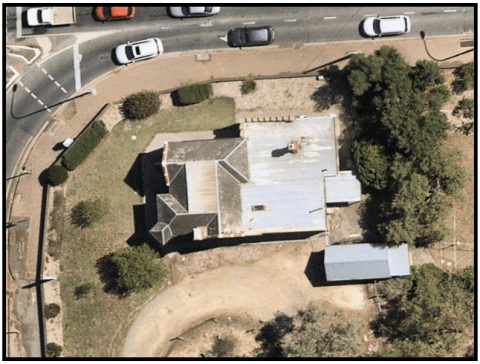 An aerial photo of the gatehouse on the south-eastern corner of Cross and Fullarton roads, included in the FMG report.

Whelan said the government had committed “$2 million to spend on other heritage values in the immediate area which are currently being used, whereas the gatehouse hasn’t been used for 10 years. And, quite dilapidated inside. And then, you know, there is a whole range of issues where the university has said it’s unlikely they’d find a use for it.”

He told the committee the intersection upgrade project had a budget of $61m, with $41m of that earmarked for compulsory acquisition of homes and land in the vicinity, and that demolishing the gatehouse and removing nearby trees would rule out the need to compulsorily acquire a further 18 homes.

“Weighing all those things up into account, the department’s recommendation to government was that whilst it’s terrible to have to make that recommendation for this project, weighing up all those issues, was to demolish the building.”

Waite MP, former Liberal turned independent Sam Duluk, told the committee that members of his electorate were dismayed by the demolition plan.

“I think in all of this, we have to talk about the land that we’re talking about not only at the Waite, but at Urrbrae High School as well, is all land that was part gifted as Peter Waite’s legacy,” he said.

“And it is one of the biggest single bequests to the people of South Australia and government.

“As the member for Waite, especially, I think I have a duty to ensure that Peter Waite’s legacy lives on not just for us today but well into the future.”