The State Government will also encourage people to return to working from the office from Monday December 14, as South Australia recorded no new coronavirus cases today for the tenth consecutive day.

Chief public health officer Nicola Spurrier said she was also “very pleased” to announce there were no active cases in the state as of 9am this morning, meaning the state is now COVID-free.

However, the case numbers are expected to rise again with the arrival of the first international flight since the Parafield cluster at Adelaide Airport from Singapore this morning.

Premier Steven Marshall said after this morning’s transition committee meeting that South Australia had “stared down the second wave” of the coronavirus and authorities had “been able to really bring this Parafield cluster under control”.

He said from Monday next week, “massive changes” to the current restrictions would be enforced.

Adelaide Oval, however, will still be restricted to 50 per cent capacity for the test match against India, which starts on Thursday December 17.

From Monday, the Government will make it mandatory for retail shops to adopt QR scanning technology.

The technology is already in place across all hospitality venues to make it easier for contact tracers to locate people in the event of anther virus outbreak.

Spurrier described the restrictions changes as “such a relief for many people”.

“But as we go forward, we just need to remember to stay safe,” she said.

“I’ve always said to people that whilst we may have no active cases in South Australia, the risk is still there when we have COVID in the world.”

Police Commissioner and state emergency coordinator Grant Stevens said the changes were possible because there had been “significant compliance from the South Australian community”.

He said the transition committee decided to wait until December 14 to lift the restrictions based on public health advice, despite last week agreeing to prematurely increase density caps for hospitality venues against Spurrier’s advice.

But he said authorities were eyeing a return to normality early in the new year.

“We did discuss the suitability of the 14th of December and it was reinforced by Professor Spurrier that that was the appropriate date based on what we’re watching with the Parafield cluster,” he said.

“We see this as a significant step towards COVID-normal, but we do think there are some other things that we’ll try and introduce probably early in the new year and we would see that potentially being our COVID-normal until we know that we have an effective vaccine that’s being distributed through the community and we no longer have to be concerned about COVID.

“I think the indicators today – zero new cases, zero active cases, the number of people that we currently have in quarantine continuing to diminish – they’re all very strong signs that we’re on track.”

It comes after the first overseas flight since the Parafield cluster landed at Adelaide Airport from Singapore this morning.

The 72 Australian passengers who were on the flight were taken by bus to the Pullman medi-hotel on Hindmarsh Square.

Stevens said he was unsure whether the people were returning South Australians or if they had plans to travel interstate after quarantine, but a “significant portion of people who undertake their 14-days of quarantine in Adelaide then do immediately leave the state to go interstate”.

South Australia is expecting more international flights throughout this week, but Spurrier said the state was “gradually easing into this, so we’re not going to be up at the same sorts of numbers as we had previously”. 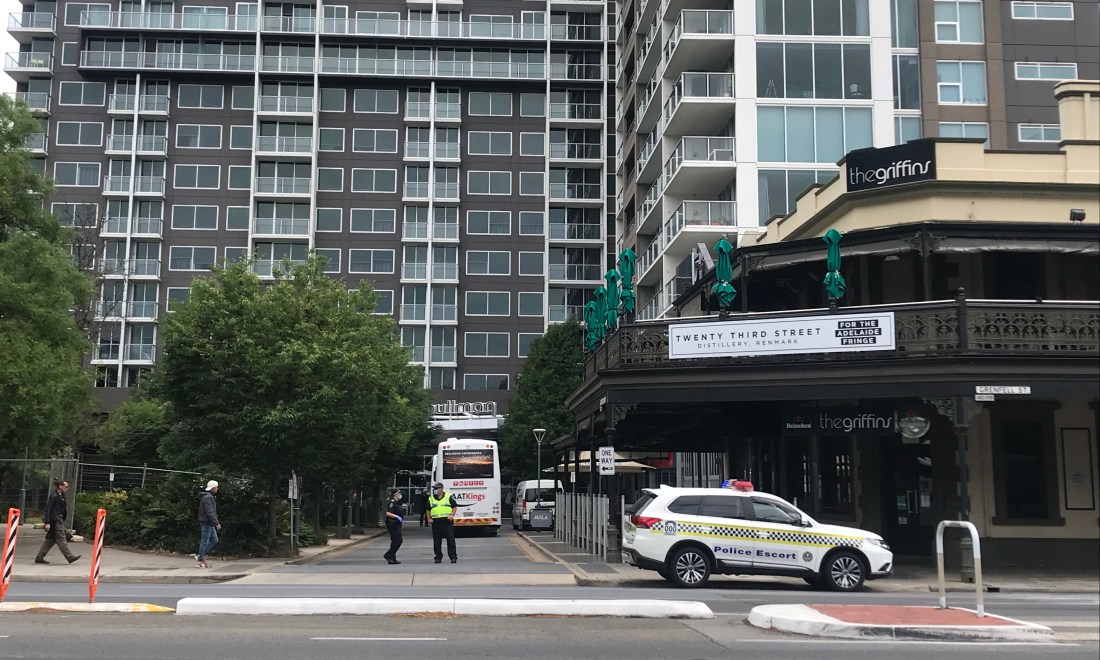 A group of 72 Australian passengers arriving at the Pullman medi-hotel under police watch this morning. Photo: Stephanie Richards/InDaily

Today’s arrivals are the first to experience South Australia’s revamped quarantine system, which was announced after an infected overseas traveller quarantining at Peppers medi-hotel in Waymouth Street is said to have transmitted the virus to a security guard who was stationed in the corridor outside his room, sparking last month’s Parafield cluster.

Premier Steven Marshall said last month that the plan, which involves establishing a stand-alone quarantine facility for all COVID-positive cases, would be implemented “immediately”, with a view to have the steps in place before South Australia resumed accepting international flights.

The plan also committed the State Government to ask the Commonwealth to impose mandatory testing of all inbound passengers before they board flights to Australia.

But the State Government is yet to establish a stand-alone quarantine facility or discuss mandatory passenger testing with the National Cabinet.

It is instead isolating infected passengers at a temporary quarantine facility occupying two floors of the Pullman Hotel.

The floors will be staffed 24/7 by SA Health and SA Police and monitored by CCTV cameras.

The State Government is still searching for a dedicated facility that is separate from the existing medi-hotels, after SA Health abandoned plans to use the Wakefield Hospital due to ventilation concerns.

Spurrier said authorities had “very detailed plans” to manage infection control as soon as returning Australians touched down in Adelaide.

“Having just been through the past four weeks I’m absolutely committed to trying to reduce the risk as much as possible,” she said.

Stevens said SA Health and SA Police were doing “everything they possibly can to minimise the risk of COVID-19 finding its way outside of these medi-hotels”.

“Notwithstanding all the efforts we’re putting in place, we cannot completely eliminate the risk – it’s about making sure we’re doing everything we can, continually reviewing our processes, and making changes and enhancements as we identify the opportunities to do so.”

Meanwhile, the Queensland Government has announced it will open its borders to South Australian travellers this weekend from 1am on Saturday, provided there are no new cases of community transition.

Western Australia has also announced it will allow South Australian travellers to enter the state from Friday, provided they quarantine at home for 14-days and there are no community outbreaks.

Marshall said he was hopeful that WA would further lift the restrictions on SA travellers before Christmas.