The 2020 Rental Affordability Index report – by National Shelter, Bendigo Bank, The Brotherhood of St Laurence and SGS Economics and Planning – found Adelaide was the second least affordable capital city in Australia for renters, behind Hobart.

It found the average household in Greater Adelaide looking to rent would need to pay about 26 per cent of the household income if renting at the median rate.

The average income for renters in the area was $67,900 per annum, according to the report.

For those on welfare payments, the report found Adelaide rentals were unaffordable.

“If you are a household on a single income and you’re looking for a one bedroom unit, there’s really nothing much available in the market and you’d find yourself paying much more than 30 per cent of your income in rent, which would be deemed unaffordable.”

SGS Economic and Planning said the average single Aged Pensioner was the worst off of low-income earners renting in the city, with 49 per cent of their income going to housing.

A couple, both on pensions used 34 per cent of their income on rent, according to the report.

While the report found a “slight improvement for average income households in Adelaide” since 2019, it followed a “notable decline in affordability throughout 2018 and 2019”.

“The market is responding to the inability of JobSeeker recipients to pay high market rents by lowering rents. From March to June 2020, rents fell between two and seven per cent nationwide,” Witte said.

She said the greatest falls in rental prices during this period were in Melbourne, which fell by seven per cent, and Hobart and Brisbane, which both fell by six per cent.

She said Adelaide rentals dropped by only one per cent.

Witte said the pandemic presented an opportunity to increase housing and jobs.

“With low interest rates, high unemployment and an increase of demand for affordable housing, this is the time to invest in social housing. And at the same time, people can be brought back into jobs,” Witte said.

The annual study drew data from state governments as well as the Australian Bureau of Statistics to measure rental affordability for households for the 12 months until the end of the June quarter.

Households were considered to be in housing stress if they spent 30 per cent or more of their gross income on accommodation.

The report used a score of 100 to indicate housing stress.

It said when a household scored below 100 other primary needs such as food, power, water and heath services became more difficult to afford. 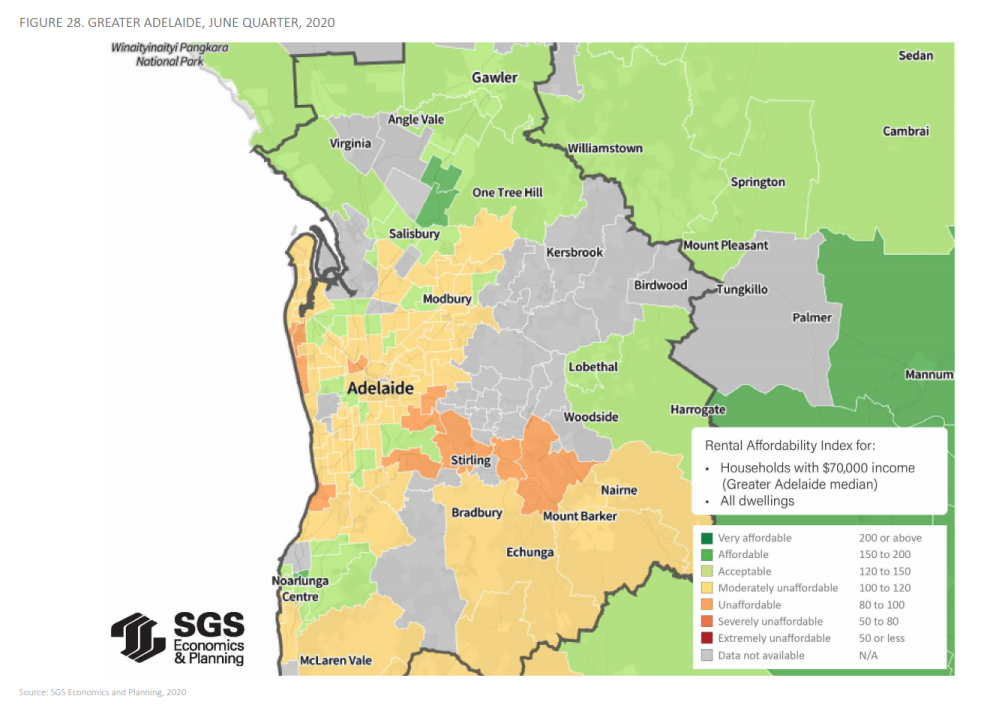 The Rental Affordability Index for Greater Adelaide showed the state capital to be predominantly moderately unaffordable. Screengrab from the report.

Coastal suburbs from West Lakes to Hallett Cove also experienced a decline since 2019, sitting between unaffordable and moderately unaffordable.

But some northeastern suburbs such as Salisbury Heights and Brahma Lodge moved from moderately unaffordable to acceptable.

In response to the report, SA Shadow Minister for Human Services Nat Cook called for an increase to investment in public and community housing “to ease the strain on families”.

“There is no substantial money budgeted by the State or Federal Liberal Governments to help solve the housing crisis,” Cook said in a statement.

“The Marshall Liberal Government Housing Strategy will not deliver a change to housing affordability for years to come, if at all. This simply isn’t good enough.”

She said the government was “committed to continuing to improve public housing for our tenants”.

“The Marshall Liberal Government is focused on empowering and supporting low-and-moderate income South Australians into homeownership through new initiatives, including our $400 million injection to build 1000 new affordable homes by 2025,” Lensink said in a statement.

“The Marshall Liberal Government’s new once-in-a-generation $550 million housing and homelessness strategy aims to help South Australians into homeownership, prevent people falling into homelessness and ensure public housing is available for our most vulnerable.”

But Shelter SA said more needed to be done to bridge “the gap” between the cheapest rental properties in South Australia and social housing.

“We would be dreading the JobSeeker rate to return to the old Newstart rate, because what we’re expecting leading up to March next year is a range of renters who may have fallen behind in their rent, because they’ve lost their job or had a decrease in their hours,” she said.

“When our emergency laws are revoked and those evictions are allowed, we fear there’ll be many South Australians who find themselves in rental arrears and unable to catch up and we’ll then see a raft of evictions across the state.

“JobSeeker is an absolutely critical part of preventing that from happening.”