All schools and universities will be closed, along with most shops apart from supermarkets, banks, petrol stations and medical facilities, with all South Australians required to stay home and urged to wear masks when not at home.

Only one person per household per day is allowed to leave the house to purchase food or essential supplies.

You can also leave the house to attend medical services or purchase supplies for vulnerable members of the community, such as older South Australians.

Elective surgery has been cancelled and all outdoor sport, and even outdoor exercise, has been banned, along with regional travel, weddings and funerals.

In the early hours of Thursday, SA Police released a new list of restrictions and allowed activities.

Only two new positive cases were reported on Wednesday in the so-called Parafield cluster, which now sits at 22 cases, all of whom originated at a medi-hotel in Adelaide.

A mask-clad Premier Steven Marshall said at this afternoon’s “special COVID update” that the “circuit-breaker” six-day lockdown aimed to stop the “silent enemy” of COVID-19.

“I’ve long said that COVID has challenged us, but it has not beaten us,” he said.

“We continue to face our biggest test to date.

“We can and we must rise to this challenge, and rise we are, each and every one of us, united with a common purpose to beat this silent enemy.

“We must act swiftly and decisively on the health advice to stay ahead of the game.”

But he said the state was imposing lockdown restrictions despite its case numbers not matching the Federal Government’s definition of a COVID hotspot.

“The definition of the Commonwealth is 10 cases per day for three days – we’ve had 22 cases in three days,” he said.

“South Australia have made their decision today on the basis that they don’t want to be thinking in a week I should have done something else and gone harder and gone faster.

“That will give them the best chance of getting on top of this outbreak.”

There were two new COVID-19 cases reported in South Australia today – both of which are linked to the Parafield cluster.

An additional seven people who are waiting test results or received an initial negative test results are being treated as suspected infectious cases.

She said the coronavirus strain linked to the Parafield cluster has a short incubation period and it takes 24 hours or less for a positive case to become infectious to others.

New restrictions will be enforced from midnight tonight and in force for six days. After that six-day period there will be a further eight days of other, lighter restrictions.

The following will be permitted to remain OPERATIONAL to maintain critical services only:

People will only be able to leave the house for the following reasons:

Masks must be worn outside of the home at all times. Young children will not be required to wear masks, however it is encouraged for older children. You cannot leave home to exercise

The following businesses will CLOSE:

State emergency coordinator and SA Police Commissioner Grant Stevens said the new restrictions were “quite comprehensive and will have an impact on virtually every member of the community”.

He said the list of restrictions was not yet complete and further updates will be provided this afternoon.

“The message is – stay at home unless you are accessing essential services or you are an essential worker.”

The restrictions apply to both metropolitan and regional areas of the state.

All inbound international flights to South Australia have been suspended at the state’s request for the remainder of this week to prioritise local quarantine requirements.

Meanwhile, some supermarkets have introduced caps on the amount of items customers can buy in one transaction following the reemergence of panic buying. 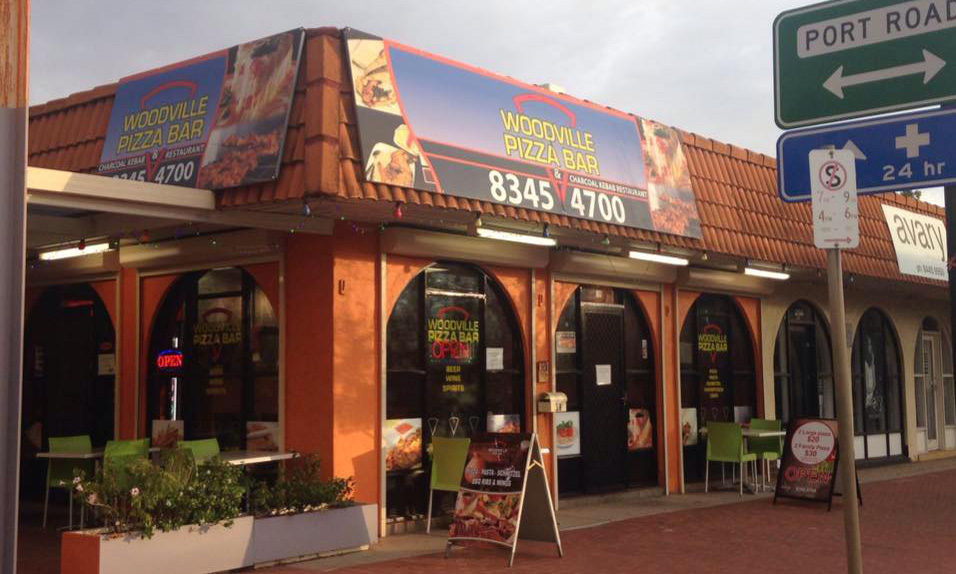 Woodville Pizza Bar has been identified as a “high risk” location. Photo: Facebook

SA Health put out an alert last night ordering anyone who visited or got takeaway – including delivery – from the Woodville Pizza Bar on Woodville Road between November 6 to 16 to immediately self-quarantine for 14 days, after the venue was identified as a “high risk” location due to a link with positive cases.

Anyone who lives with a person who visited or had food from the pizza bar must also immediately self-quarantine for 14 days.

The same directive applies for people who visited Thomas More College at Salisbury Downs and Roma Mitchell Secondary College at Gepps Cross on November 12 to 13.

Anyone who has visited Mawson Lakes School and Preschool, Lyell McEwin Hospital emergency department and the Aquadome at Elizabeth should also immediately self-quarantine and seek testing.

SA Police have issued a directive for anyone who visted the Peppers medi-hotel on Waymouth Street since November 15 to immediately self-isolate and get tested.

People currently quarantining at the hotel were yesterday told that they need to isolate for a further 14 days, regardless of how long they had already been in hotel isolation.

View the full list of locations on alert, including SA Health advice, below.

InDaily will continue to update the list as information becomes available.

All schools will be shut for the next six days.

Spurrier said it wasn’t necessary to shut schools over March and April because “at that time we had a number of different strains introduced into our state from international travellers”.

“When we looked at the way that those strains of the virus were spreading in our community it was a little bit slower and also, because they were international travellers, it gave us the chance to find them (the positive cases) because it was obvious that we were looking for people who had international travel.

“This is quite a different situation – we are really at the beginning of this in South Australia and I really need everybody to find a safe place to be for the next six days and stay there as much as possible.”

Roma Mitchell High School will be shut until November 30 after an “older student in her teens” was infectious when she attended the school on Thursday and Friday last week.

“Because she was infectious we have put a stronger quarantine requirement on that school,” Spurrier said.

SA Health is asking people to only attend a COVID-19 testing site if they have symptoms or have been instructed to get tested.

It is in the process of establishing a new, separate testing facility for people who have been instructed to get tested after they visited an at-risk location.

It comes as people are forced to queue for up to 10 hours to get tested, with many turned away at 8pm last night when the testing clinics shut.

Marshall told ABC Radio Adelaide this morning the queuing was “certainly not ideal but we’re in an extraordinary situation and we’re asking the people of South Australia to work with us and be patient.”

“This surge that we’ve had is something which is stretching our capacity here in South Australia.”

Over 6000 people were tested yesterday.

Acting federal chief medical officer Paul Kelly said over 11,000 tests have been conducted in South Australia over the past couple of days.

He said the Australian Defence Force would be deployed to work at new pop-up testing clinics and to provide support at already-established testing clinics.

There are over 4000 people currently quarantining for 14 days.

How the Parafield cluster started

The Parafield cluster started when an overseas traveller arrived in South Australia on November 2 and was placed in immediate 14-day quarantine at the Peppers medi-hotel in Waymouth Street.

The traveller tested positive for coronavirus on November 3 and transmitted the virus to a worker at the hotel.

Because mandatory testing of medi-hotel workers was not enforced at the time, the worker unknowingly became infected and transmitted the disease to their extended family.

Health authorities were alerted to the locally-acquired transmission – the first in South Australia since April 15 – when the worker’s 80-year-old mother presented to the Lyell McEwin Hospital emergency department late on Saturday November 14 and tested positive for coronavirus.

About 90 staff and patients at the Lyell McEwin Hospital were placed in immediate quarantine.

The worker and their partner were subsequently tested positive and the three confirmed cases were announced on Sunday afternoon.

Overnight, the cluster grew to a confirmed 16 cases.

Yesterday, a further four confirmed cases were announced, bringing the total number of cases linked to the Parafield cluster to 20.

A fifth case was identified minutes before SA Heath provided an update, but at the time it was not clear whether it was linked to the cluster.

Two new cases linked to the cluster were reported today, bringing the total to 22.

Health authorities are concerned over the Woodville Pizza shop on Woodville Road that is considered one of the Parafield cluster’s hot spots.

A worker at the pizza shop is one of the confirmed cases linked to the cluster. The worker is a close contact of a security guard who worked at Peppers medi-hotel in Waymouth Street.

A kitchen-hand at the Stamford medi-hotel contracted the virus after they came in close contact with the Woodville Pizza Bar worker.