Laura Thompson, co-founder of Clothing The Gap, helped start the #PrideNotProfit petition and Free The Flag campaign which led to the Senate inquiry into the flag’s private copyright protection. She said she was surprised that the Mint released a coin set featuring the Aboriginal flag before the copyright issues were resolved.

Earlier this month, the Royal Australian Mint released two sets of coins to celebrate the upcoming 50th anniversary of the Aboriginal flag. Retailing for $30 and $120, both sets contain a two-dollar gold coin featuring a black and red design to represent the Aboriginal flag.

The Mint’s executive general manager Mark Cartwright said the organisation had worked with copyright holder, Luritja artist Harold Thomas, and profits from the sale of their collectable sets would be returned as a dividend to the Federal Government.

“Should anybody be making money off flags?” Thompson said.

“Aren’t flags meant to be about pride and not profit? Whereas the Aboriginal flag in Australia is certainly as much about profit as it is about pride, and I think people are sick and tired of it, and they want to be able to use their flag without worrying about how much it’s going to cost.”

The release of the commemorative coin has arrived during a time where there are increasing calls to ‘free’ the Aboriginal flag. 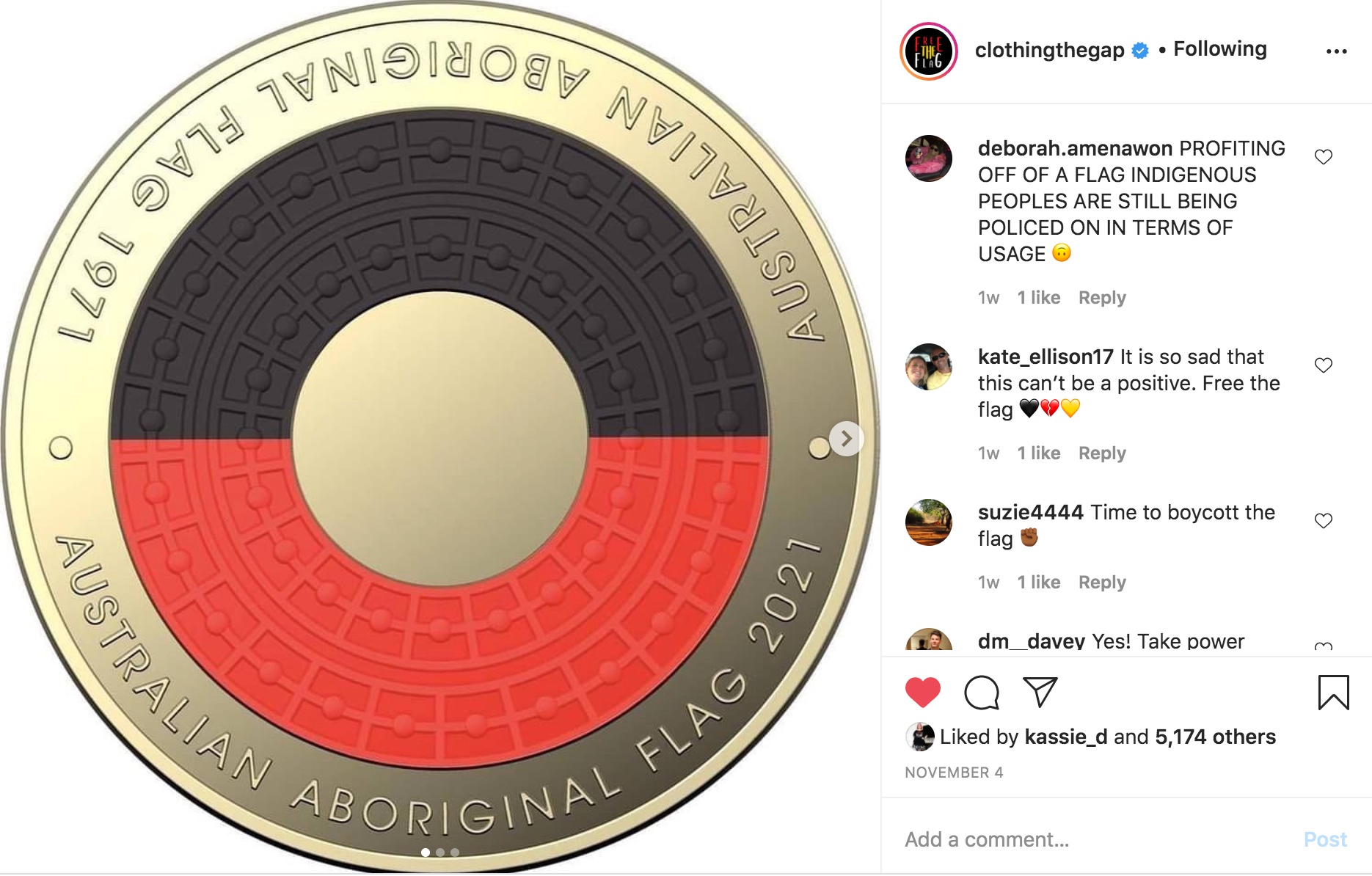 In September 2020, the Senate established a Select Committee to consider the flag’s copyright issues. In October, the committee recommended against compulsory acquisition of the flag by the Commonwealth Government. Negotiations between Thomas, current licensees, and the government to reach a solution are ongoing.

“The government is calling a Senate inquiry to look at the copyright of the Aboriginal flag and the commercialisation of the flag, yet at the same time is entering into a commercial arrangement with Harold [Thomas],” Thompson said.

Harold Thomas designed the flag in 1971, and has been officially recognised as the author and copyright holder of the flag since 1997.

WAM Clothing has since issued infringement notices to non-profit Aboriginal organisations, Aboriginal-owned businesses, the AFL and NRL for their use of the flag.

Cartwright said the Mint worked with Thomas to use the flag’s design, but was unable to give details of the agreement to InDaily. He also said RAM regularly consults with the Australian Institute of Aboriginal and Torres Strait Islander Studies (AIATSIS) when producing Indigenous-themed products.

AIATSIS said while they have previously worked on coins with RAM in 2018 and 2019, they weren’t “formally involved” with the current collection.

The coin was designed before the Senate inquiry by one of RAM’s in-house coin designers, and the sets took approximately 16 months to produce, from conception to distribution.

Cartwright said due to expected high demand, the sets are an unlimited mintage, meaning the Mint will continue to produce the sets for the next 12 months or until demand diminishes.

Thompson said while RAM’s new release was historic, Aboriginal people couldn’t celebrate it as they feel like the flag is no longer theirs.

“The Aboriginal community, and I think all Australians have our backs on this issue, don’t want to celebrate the Aboriginal flag right now in its current state. We certainly aren’t excited about a collection of coins, and we just don’t think that it was the right thing to do given the current situation of the flag.” 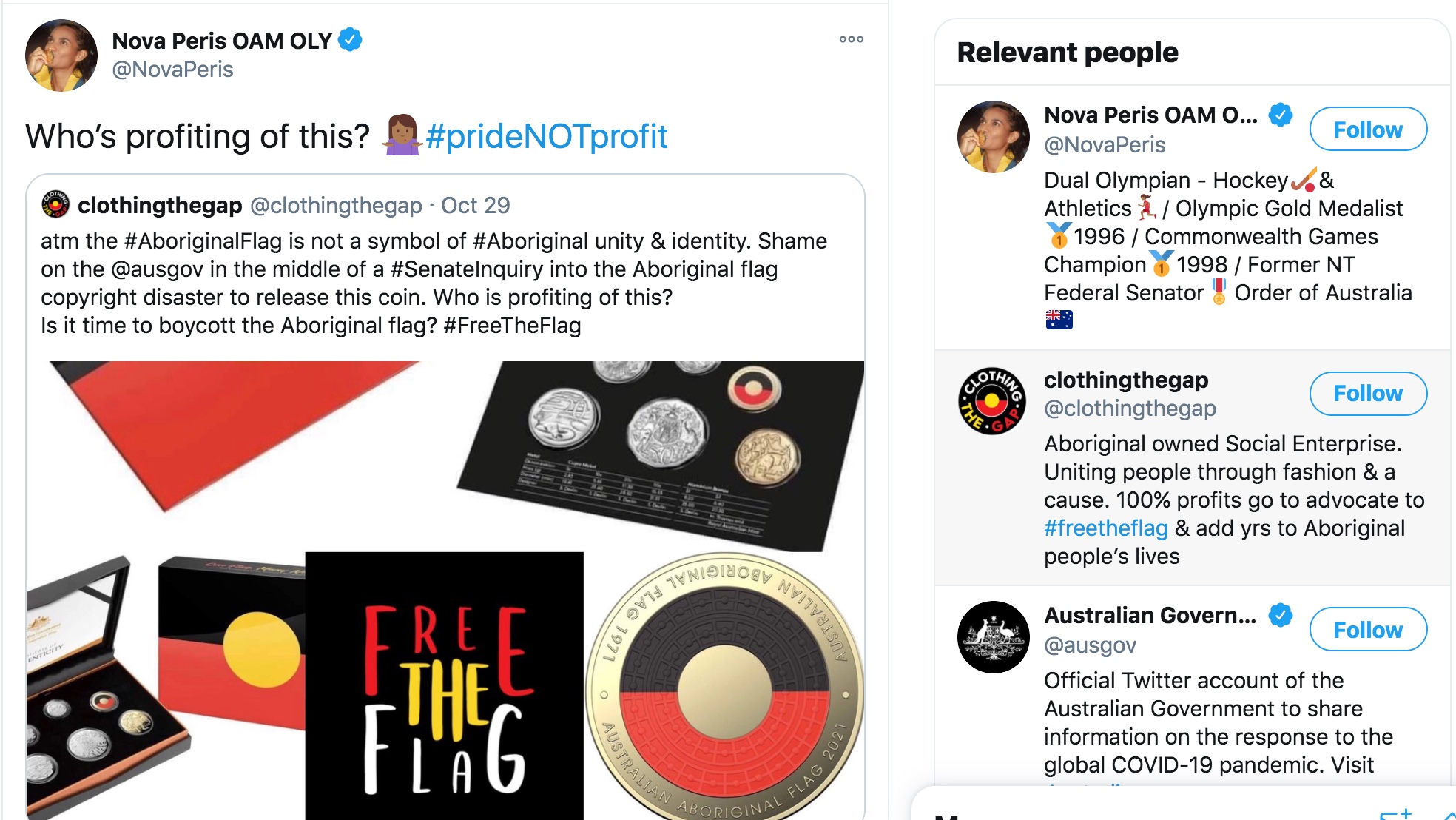 Thompson said if the flag’s situation is not resolved by its 50th anniversary in 2021, many in the Aboriginal community would seriously consider adopting a new flag design that could be used freely.

Cartwright said as of November 11, 90 per cent of the initial run of production of the coin sets had sold, and the Aboriginal flag two dollar coin will be released into circulation in 2021.

He said a further collaboration with another Indigenous artist, who Cartwright was not allowed to name, would also be released in mid-2021.