The state’s COVID cluster exploded this morning, with overnight testing yielding 17 cases linked to the weekend’s first case of community transmission since April – with that total expected to climb significantly.

Several members of a single extended family have tested positive, with Spurrier saying this morning “we just kept getting positives coming off the machine”.

Health authorities yesterday introduced mandatory seven-day test requirements for all staff working in Adelaide’s medi-hotels, including nursing, police, security, cleaning and concierge workers, after the new cases were linked back to a family member working at one of the facilities.

SA has recorded more than 50 cases since the beginning of October linked to returning travellers staying in medi-hotels.

“I’ve had concerns over the last couple of weeks, not because of our processes, but just because of the number of positive cases we’ve had in those medi-hotels,” Spurrier told ABC Radio Adelaide today.

“It just increases the risk of it getting out, and it obviously has in this instance.”

SA Health updates regularly reiterate that there is “no public health risk” from positive cases that are returned in medi-hotels, but Spurrier said because of “increasing numbers across the world” there is “more chance of [returning travellers] being positive on arrival”.

But she defended the testing regime for staff, which has previously been on a voluntary basis if they develop symptoms.

“Our medi-hotel process has been reviewed by the national team, and we really did come out on top on that,” she said.

“If you start testing on a regular basis, if people develop symptoms in between we know they’re less likely to then go and get tested – so it’s actually quite difficult to work out the frequency of testing…

“We can’t test people on a daily basis, or every second day… we’ve certainly had testing available for our staff but clearly we need to increase that.”

She didn’t flag a move away from quarantining returned passengers in SA, saying “it’s our responsibility as a state to repatriate stranded Australians overseas [and] we’ve put in place a very, very robust medi-hotel system”.

“This is something we discuss on an almost daily basis with the Commonwealth [in terms of] our capacity,” she said.

But she said in the short term capacity would be reserved for dealing with the escalating crisis.

“We were supposed to be having a flight today, we’ve obviously had that cancelled and we’ve indicated to the Commonwealth it’s likely we’ll have to cancel further flights,” she said.

“We have to put our resources 100 per cent on getting on top of this cluster.”

Spurrier said there had not been “a national position on regular testing in our medi-hotels”, with a focus instead on prevention measures including hand hygiene and wearing appropriate Personal Protection Equipment.

She said she could appreciate public antipathy to the evolving revelations.

“I can understand it – I’m pretty upset and disappointed as well, but what we need to do is look forward and get on top of the cluster,” she said, urging people to “just be kind to each other”.

“We need to be doing what every one of us can do… let’s think about what we can do as individuals as well.”

Premier Steven Marshall told ABC Radio Adelaide he had queried health authorities as to why medi-hotel staff were not required to get tested regularly.

“I did question that situation, but I was provided with advice that what we were doing was based on best practice at the time,” he said.

“Obviously you look to that in light of individual outbreaks [but] it’s much better to rely on people who develop symptoms to get themselves tested immediately… if you only do it once a week people just say ‘I’ll wait till then’.”

However, SA Health will now do just that, with weekly mandatory testing in place from yesterday. 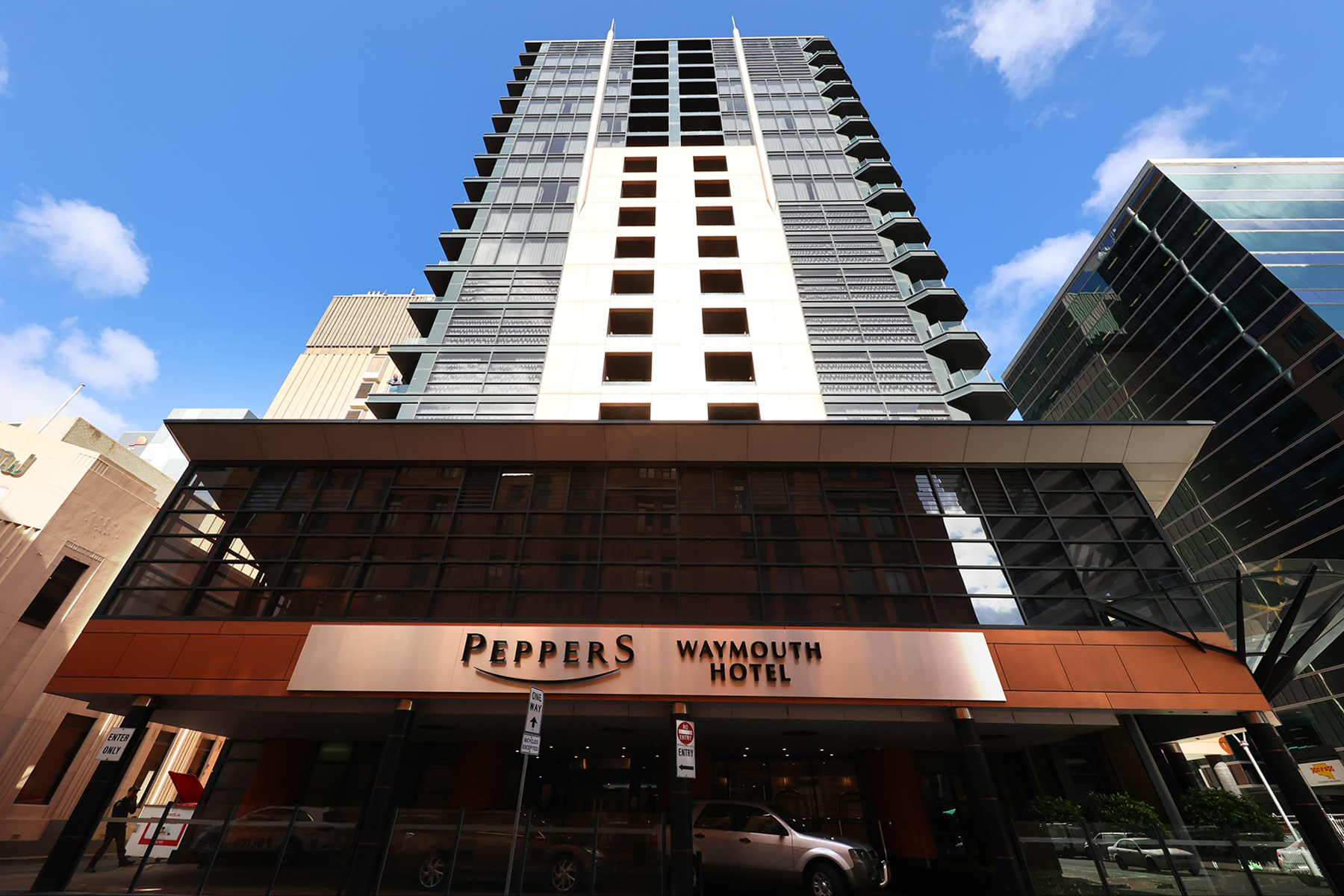 Peppers Hotel has been used as a medi-hotel for international arrivals. Photo: Tony Lewis / InDaily

“We subjected ourselves to an audit and found we were conforming to best practice [so] I can only assure people we do follow best practice – but in this instance, clearly there’s been a problem and someone has become infected,” Marshall said.

“I’m not a health professional… we’ve done extremely well in SA by listening to the health experts and acting to stay ahead of the game.”

He said there had been concerns that SA was recording “a disproportionately high number of [coronavirus cases] in hotel quarantine” but that data revealed the cases were from “a spread” of different countries.

“We were unlucky with that situation… we’re still 100 per cent committed to playing our role in national repatriations of citizens,” he said.

Spurrier has confirmed she found out about the initial case of community transmission – an 80-year-old woman being treated at the Royal Adelaide Hospital – around midnight on Saturday night, with Police Commissioner Grant Stevens and Health Minister Stephen Wade informed shortly afterwards.

Marshall said Wade texted him at 5am on Sunday and they spoke an hour after that, but defended not notifying the public until after 3pm – despite the Premier holding a media conference at 11am to spruik the release of a state sporting infrastructure plan.

“At that stage we had a single case,” he said.

“At that stage we thought that was an isolated case – it wasn’t.

“The last thing we need is people to be panicked or alarmed during this pandemic.”

He said he had “every single confidence in SA Health”.

“I’m sure they’ll be doing an excellent job,” he said.

“I understand the principle focus of the State Government should be responding to this cluster [and] would understand if the Government wished to delay upcoming Budget Estimates hearings,” he said in a statement.

“The effort and time that is required by agencies and public servants to prepare and appear before these hearings is substantial, so I can understand if senior Health, Police, Education, Department of Premier and Cabinet and other agencies involved in the COVID-19 response would rather focus solely on responding to the current outbreak.”

Bureaucrats from DPC, Police and Health are all scheduled to appear this week.