Chief public health officer Professor Nicola Spurrier confirmed this morning that the cluster – SA’s first since April – was linked to a large family in Adelaide’s north.

From three locally-acquired cases announced on Sunday afternoon, the cluster grew overnight to a confirmed 17 cases, including two people outside the family.

However, at a press conference this afternoon she said the number had not grown as of mid-afternoon despite widespread testing.

“I’m feeling very positive about that, I can tell you,” Spurrier told the 3.15pm media conference.

However, she warned “it looks like we’re in the beginning or early part of what could be a second wave” of the virus in SA.

“What we’re facing is indeed a second wave, but we haven’t got the second wave yet,” she said.

The cluster is believed to have originated with a family member who worked at an Adelaide medi-hotel, reportedly Peppers on Waymouth Street.

Three staff from the hotel – two security guards and one “back of house” worker – are among the 17 positive cases, including the two from outside the extended family.

“Our initial review of this it’s clearly [originated] from a medi-hotel,” Spurrier said today.

Spurrier, who yesterday flagged introducing mandatory weekly testing of medi-hotel workers, insisted “there’s nowhere else in Australia in their medi-hotel system that mandatory testing is being done” at present.

“It’s something I’ve raised with the Commonwealth chief public health officer and AHPPC [Australian Health Protection Principal Committee] and that would be my strong recommendation now,” she said.

Health authorities are also considering three children who have thus far returned negative tests as positive cases, because their parents have returned positive tests, they are all showing symptoms and given difficulties in obtaining definitive results from children.

The infected and suspected-infected children have sparked the closures of Mawson Lakes Primary School and Preschool, Thomas More College at Salisbury Downs and Holy Family Catholic School in Parafield Gardens, while an infected Hungry Jack’s worker has prompted the closure of the Port Adelaide outlet.

State schools more broadly will remain open for now, despite a range of new restrictions being imposed from midnight.

Parafield Plaza Supermarket is closed for cleaning after a family member shopped there while infectious, while an Anglicare aged care facility at Brompton is in lockdown because two family members worked there.

Calvary Hospital has also stopped all general visits, except for obstetrics and paediatrics patients.

About 90 staff and patients at the Lyell McEwin Hospital are in quarantine after an elderly family member presented to the emergency department while infectious, while an alert has also been issued about Yatala Labour Prison after a staff member tested positive.

Two of the infectious people are at the Royal Adelaide Hospital and the other 15 are quarantining at medi-hotels.

SA Health has advised people who visited any of the below locations during the listed times that they do not need to self-quarantine but should monitor for COVID-19 symptoms, including fever or chills, an acute respiratory infection, loss of smell or alteration in the sense of taste, and get tested immediately if symptoms appear. 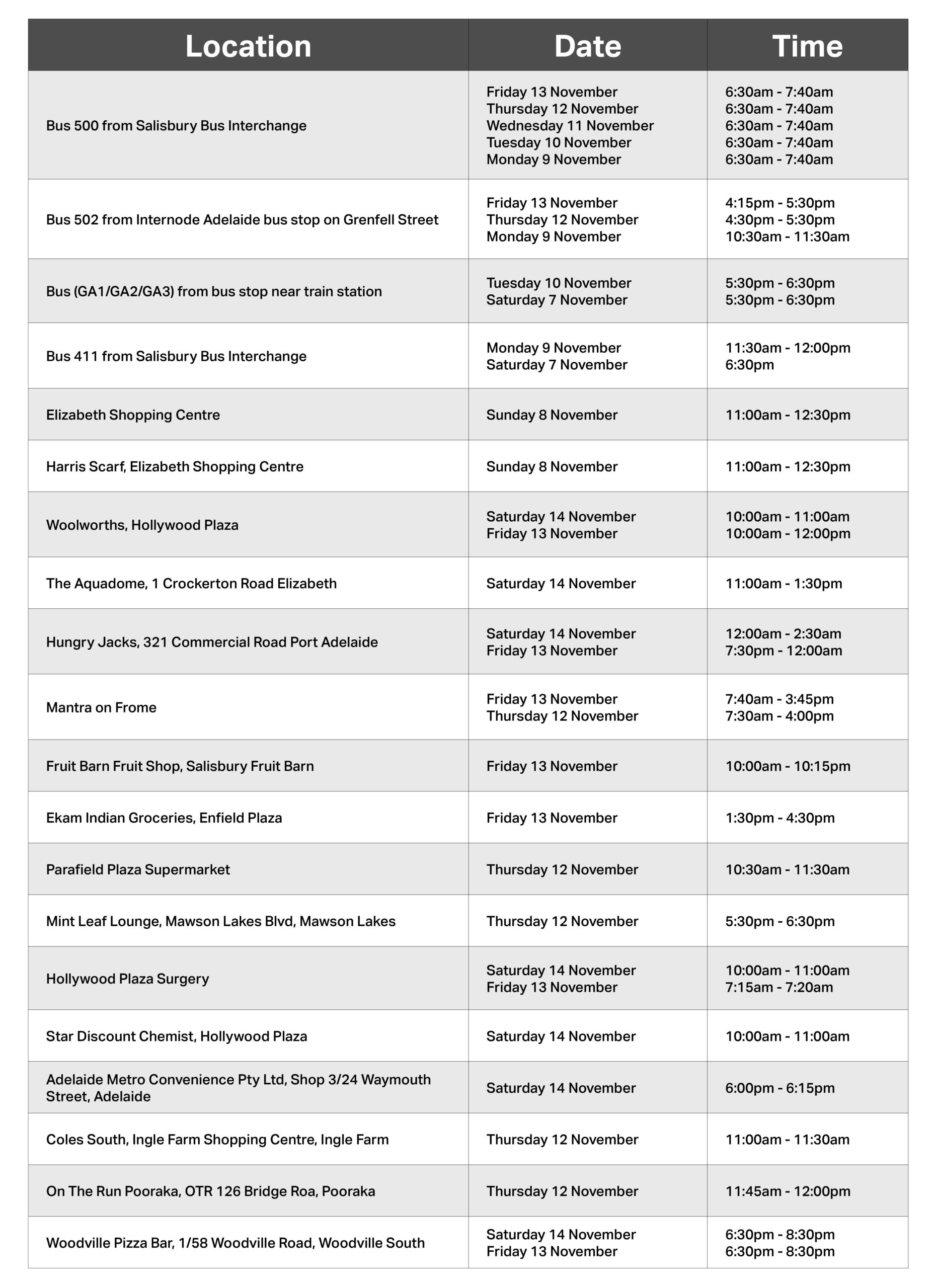 The cluster was sparked when a woman in her 80s, who lives independently, went to the Lyell McEwin Hospital emergency department on Saturday and tested positive for COVID-19.

Two of her family members, a woman in her 50s and a man in his 60s, also tested positive.

One of the pair reportedly worked at the Peppers Waymouth medi-hotel used by people travelling into the state and local residents who can’t quarantine at home.

Two of the infectious people work at the Anglicare residential aged care home at Brompton that has since been placed in lockdown and another works at Yatala Labour Prison.

The known cases linked to the cluster include:

Spurrier said health authorities were alerted to the outbreak from midnight Saturday, when the 80-year-old woman tested positive.

She said testing conducted overnight on Sunday included other members of the 80-year-old woman’s extended family.

“We just kept getting positives coming off the machine,” she said, adding it was “very clear” the cluster was linked to a medi-hotel.

“We haven’t got the genomics yet, but I’m absolutely certain it has come from a medi-hotel.”

In a statement this afternoon, AnglicareSA confirmed that two of its enrolled nurses who work at the Brompton residential aged care home tested positive for COVID-19 late yesterday.

The nurses are a mother and daughter, who are close relatives of the 80-year-old woman who tested positive on Saturday.

“The employees have not been in attendance at Brompton since Friday 13 November and have not worked at any other AnglicareSA residential aged care home,” the statement said.

“Both employees are now quarantined in a medi-hotel.

“At this stage, no residents or staff are symptomatic.”

The nurses last visited the facility, which provides support for disadvantaged aged residents who are homeless or at risk of homelessness, on Friday November 13.

One worked on Thursday night and the other worked on Friday morning.

There are 40 residents living at the Brompton facility and 56 staff, including nurses, personal care workers, administration and hospitality staff.

The home is currently closed to all visitors while a full clean is undertaken and residents isolate for 14 days.

Staff and residents were tested today and will undergo further testing after 72 hours and again on day 12 of isolation.

“Naturally we all have a degree of apprehension, but we have been taking precautions,” AnglicareSA CEO Peter Sandeman told reporters this afternoon.

“The residents are unable to leave, no visitors are admitted and we expect that to continue until we are advised otherwise by SA Health.”

A student at Mawson Lakes School and a Year 8 student at Thomas More College, who are part of the 80-year-old woman’s extended family, also tested positive.

Spurrier said she was unsure whether the Mawson Lakes School student attended the school while infectious.

According to the school, there are no other students who have tested positive for COVID-19.

Spurrier said she was also unsure whether any of the infectious people attended the Christmas Pageant at Adelaide Oval on Saturday night.

Mandatory testing every seven days has now been imposed on all staff and guests at all medi-hotels.

The cluster has this morning prompted a surge in the number of people getting tested for COVID-19, with car build-ups in place around the Victoria Park drive-through clinic and queues at the Parafield Airport testing station.

State emergency coordinator Grant Stevens and Premier Steven Marshall were not informed of the outbreak until early Sunday morning.

Marshall fronted reporters on Sunday to spruik sports funding in the recent State Budget, but he did not reveal the positive case.

“I think the people of SA just want a speedy resolution to this cluster,” he said today.

“There’s plenty of time to review this after.”

Wakefield Road was backed up for about two-kilometres this morning as cars queued to enter the Victoria Park drive-through testing clinic. Photo: Michael Errey/InDaily

Asked whether South Australia could lock down particular suburbs where the coronavirus outbreak is concentrated, Stevens told ABC Radio Adelaide it would be “very difficult”.

“We’ve had some success in the past, I think, with plenty of public notification, shutting down key services in particular locations and then encouraging everybody to do the right thing in those areas,” he said.

“I think that’s probably the first step and we’re already seeing that with some of the locations that have been shut while they go through a cleaning and investigation process.

“Let’s hope that we don’t have to make any significant changes to our restrictions across the board, but I think everybody’s mindful of the fact we don’t want to be in a place like Victoria was.”

The interstate impact of Adelaide’s cluster has been immediate with Western Australia, Tasmania and the Northern Territory declaring SA a COVID hotspot and reimposing border restrictions.

South Australians entering those jurisdictions need to get tested immediately upon arrival and quarantine for 14 days.

Queensland will close its borders to South Australian travellers from 11.59pm tonight.

The Queensland Government has asked the approximate 7000 people in that state who have been to Adelaide in the past seven days to immediately get tested and self-quarantine, even if they don’t have symptoms.

Victoria, which today recorded 17 straight days of no coronavirus deaths or new cases, has also declared South Australia a COVID hotspot and will impose extra screening on all arrivals.

Canberra residents are being asked to reconsider all non-urgent travel to South Australia.

“It’s completely understandable that other jurisdictions will be watching us very closely to see how we go and whatever decisions they make would be understandable in the circumstances,” Stevens said.

“We need to learn to live with COVID. You can’t shut down borders and disrupt lives every time there is an outbreak and disrupt businesses,” she said.

South Australia has cancelled an inbound overseas flight due to arrive today and it is likely further flights will also be cancelled later in the week.

He has offered to send Australian Defence Force troops and a national incident centre is being set up.

“If more is required, more will be provided,” Hunt told the ABC on Monday.

“But these are the sorts of challenges that if we trade or engage with the world, if we bring Australians home, we will face, in a world where there’s over half a million cases a day.

New restrictions on gatherings, venues as SA "faces a second wave" of COVID-19

“Having these strong testing, tracing and isolation systems are absolutely critical and South Australia – on all the evidence – does have exactly that.”

Prisoner movement from the Adelaide Remand Centre or Mobilong Prison to the courts has also been put on hold.

SA Health is expected to hold a press conference later this afternoon.

– with AAP and additional reporting by Tom Richardson