All of Australia’s top-five export markets experienced growth in value in the 12 months to September 2020 to reach a total value of $2.998 billion, according to Wine Australia’s latest Export Report released today.

South Australian wine accounts for about 50 per cent of Australia’s annual wine production and more than 75 per cent of premium wine.

The three months between July 1 and September 30 showed the strongest growth as many parts of the world emerged from pandemic lockdowns.

Wine Australia Chief Executive Officer Andreas Clark said the overall value is at the highest level since exports reached $3 billion in the second half of calendar year 2007.

“Despite the unprecedented disruption that we’ve seen in markets around the world, Australian wine export volume has held reasonably steady and it is particularly pleasing to see both the overall value and the average value of exports growing during these challenging times”, he said.

For the 12 months to the end of September 2020, the growth in value was predominantly driven by exports to the United Kingdom (UK) and mainland China. And that growth has been particularly strong in the last quarter of the 12-month period.

“During the July to September 2020 quarter, the value of exports increased by 23 per cent compared to the same period in 2019, and this comes after declines of 4 per cent in the April to June quarter and 7 per cent in the January to March quarter,” Clark said.

“Throughout the COVID-19 pandemic, there have been clear trends for wine consumption emerging around the world.

“While premiumisation has continued, there has also been a resurgence in commercial wines, and this is evident in the growth that we’ve seen in different price segments, where it was particularly strong at the low and high ends.”

Of the 117 destinations Australian wine was exported to in the 12 months to September, the most significant growth came in Europe, where exports were up 16 per cent to $678 million. 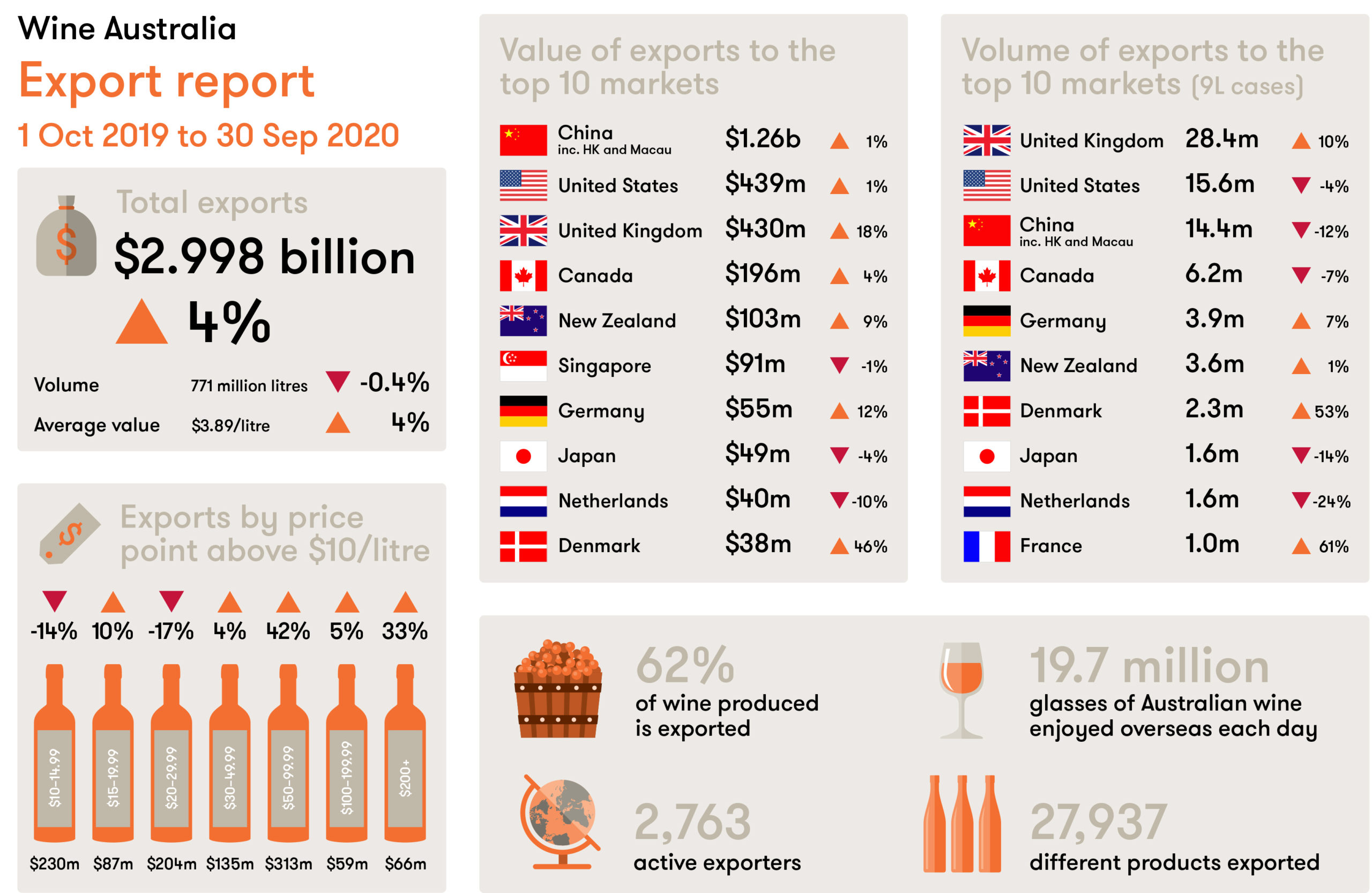 In August, China announced it had launched an anti-dumping investigation. Companies asked to provide information to the probe, including Penfolds parent company Treasury Wine Estates and Casella Family Wines, have until mid-November to complete questionnaires to assist the Chinese Government with its investigation.

A second investigation was subsequently launched by China into countervailing duties and involves the same companies with the addition of Pernod Ricard, the makers of Jacob’s Creek.

SA Wine Industry Association chief executive Brian Smedley said some companies were still doing well in China while others struggle depending on a number of factors including the strength of their brands and distribution networks.

“So for those figures to demonstrate what they have is a welcome surprise because they are showing strong stability and some elements of growth there,” he said.

“Irrespective of COVID and the other things going on such as the investigations by China, we certainly were aware from anecdotal evidence within the industry that we were seeing some additional activity in the UK and that seems to be being shown in these figures.

“In the lead-up to Brexit people are potentially wanting additional Australian wine in market and to some extent we are also seeing that in China.”

Smedley said the major wine companies singled out in the Chinese investigations were busily preparing their questionnaires ahead of the deadline.

“Whilst in the public sense it may be quiet, the industry is very, very busy filling out its obligations relating to the process.”