They say there aren’t enough beds or specialised nurses in the Michael Rice Centre (MRC) Ward – the children’s oncology unit – forcing patients to receive treatment in general wards by nurses who don’t have adequate experience in the complex and toxic therapies.

In their letter to Health Minister Stephen Wade and Premier Steven Marshall, dated October 15, seen by InDaily, the group says two beds were closed in the ward earlier this month and the number of beds now available is “a far cry from what is actually required on an ongoing basis”.

“The MRC Ward has a nine bed capacity, and therefore inpatients are ranked in their priority to be on the MRC Ward or to be managed as outliers elsewhere in the WCH,” the letter states.

Some of the parents, whose children are receiving cancer treatment at the WCH, held a press conference this morning with Dr Michael Rice, who set up the Michael Rice Centre Ward in 1967, and worked as a paediatric oncologist for decades before retiring.

Rice said the ward currently had nine beds but earlier this month the number of inpatients reached 17.

“Apparently they have been over the availability of their nine beds for much of the last few months,” he said.

Rice said when the nine-bed capacity was reached, the other children went to “an outlying ward where they don’t have dedicated staff.”

“They are at risk of adverse events,” he said.

“Mistakes are being made, staff are stressed, corners are cut. It’s not the way to ensure safety and quality.” 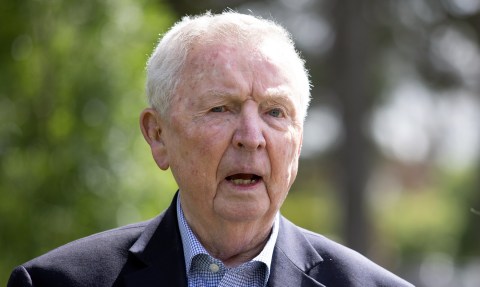 She wrote the letter, co-signed by 32 other parents, after seeing problems within the hospital.

“We are concerned about the safety of our children and the nurses who are not trained to manage these kids,” she said.

“When the drugs are being put into the system they are toxins so it’s essential to have staff managing Knox and other children who understand the complexities of the drugs going into his system – and they know what side effects might occur and they can help to alleviate them before they occur.”

“When you go and are treated by staff who don’t know what they are doing, through no fault of their own, the fear of God goes into you – it’s very harrowing,” she said.

“To know that potentially the services aren’t there to save your child’s life is gut-wrenching.”

Charlotte’s father Anthony Agostino stressed it wasn’t the fault of the nurses in the other wards.

“They do the best they can,” he said.

Jazmyn was first diagnosed in 2017, aged seven, after experiencing what her family thought were “growing pains”.

“There’s nowhere near the staff that we need,” her mother said.

“They are giving us nurses that can’t speak English, don’t even know what the drug is let alone how to deal with if she does have bad side effects, which for her can be absolutely horrendous.

“She can end up in the intensive care unit if they don’t know what they’re doing.

“It just scares me when they give us someone who actually has no idea what they are doing.”

“Give us back what we need. We need more beds to start with.”

Rice said he had concerns the new hospital, to be built near the Royal Adelaide, would have similar problems.

“Administration and Department of Health need to listen to clinicians, act on clinicians’ advice, not come to clinicians and say this is what we are doing,” he said.

Jenny Ferradey, executive director of nursing and midwifery at the Women’s and Children’s Hospital, said there had been an increase in cancer patients in recent months but the hospital was equipped to deal with it.

“I am confident that we have the nursing staff that are trained and educated in caring for these patients,” she said.

“There is always a bit of an ebb and flow with staffing. We are always providing ongoing education.”

She said the medical staff in the Michael Rice Centre Ward worked “across the organisation”.

She also said staff in overflow wards had adequate training in caring for cancer patients.

“We are very lucky because we have dedicated nursing educators across the wards… that provide education for casual staff, for staff on the unit and staff (in other wards),” she said.

Dr Ben Saxon, the medical unit head of the Michael Rice Centre Ward, said there had recently been an increase in the number of doctors in the oncology ward and “we have plenty of nurses who are well trained in looking after children with haematology (and) oncology problems”.

“When there’s more than nine patients needing inpatient care, we have patients allocated to another ward,” he said.

“This is standard practice in every major hospital both nationally and internationally that there’s a secondary ward where patients can be cared for.”

The oncology concerns come a week after doctors spoke out about a lack of cardiac surgery services at the Women’s and Children’s Hospital, which has blamed as a factor in the deaths of four babies in a month.

SA Health is reviewing the “cluster” of deaths and an independent external review is also underway.

Authorities are also reviewing cardiac services at the hospital.

The latest concerns came as the State Government this afternoon announced a $42.8 million infrastructure stimulus package which it said would trigger a series of job-creating projects throughout the state.

It includes a new $6 million step-down unit to care for brain and spinal patients at the Repat, an expansion of the Gawler Hospital emergency department and an extra $10 million for regional health infrastructure works.

“This funding boost will kickstart a range of important health projects for local communities and create hundreds of jobs at a time when we need them most,” Premier Steven Marshall said.

“It will further bolster South Australia’s already world-leading health capabilities which have stood strong during the global COVID-19 pandemic and will deliver better services for South Australians.”

But the Opposition said new figures revealed health infrastructure spending had tanked under the Marshall Liberal Government, reaching its lowest level in a decade.

“We need governments to be doing everything they can to keep South Australians at work – boosting our hospital capacity to respond to future pandemics is a no-brainer.”