He also said authorities were reconsidering a decision not to develop a paediatric cardiac surgery unit in South Australia.

It comes after startling evidence given to a parliamentary committee yesterday by the doctors’ union and a prominent obstetrician that four babies had died at the WCH in the past four weeks because of a lack of paediatric cardiac services, including a surgery unit and an ECMO.

Wade said his “thoughts and prayers” went out to the families involved in the “cluster” of baby deaths.

“In the context of a normal year we would only expect to see six to 10 babies and children who would need an ECMO service or who would benefit form an ECMO services – this is an unusual cluster,” he said.

Wade said he’d asked Deputy Chief Medical Officer Dr Michael Cusack “to work with the WCH to review these cases to see what we can learn and to see if there are any implications in relation to COVID”.

Adelaide is the only mainland capital city without a paediatric cardiac surgery unit or ECMO service.

Sick babies and children have been required to fly to Melbourne for life-saving heart services, but COVID restrictions have hampered that and they now have to go to Sydney.

Deputy Chief Medical Officer Dr Michael Cusack said he hoped to complete the review within two to three weeks and expected to report back to the minister within a month.

“This cluster is clearly a cause for concern, having seen four babies in the past four weeks who have died at the WCH,” Cusack said.

“Where we see four babies in a cluster in that way that is a cause for further investigation.”

The Opposition this morning produced a leaked report showing the Marshall Government was warned more than a year ago of the risks of not having a paediatric cardiac surgery unit and ECMO.

A cardiac surgery business case report prepared by the Women’s and Children’s Health Network in July 2019, seen by InDaily, states “at least one avoidable death has occurred”.

It states “near miss events have occurred” and that “avoidable mortality” is a risk of not having a cardiac unit.

“The proposed service is feasible, safe and cost effective,” the report states.

“Its financial, clinical and social benefits greatly outweigh those of the current service.

“Delaying its implementation will only perpetuate the current risks and defer future benefit.”

“The Marshall Liberal Government was specifically warned more than a year ago of the risk of babies dying due to the lack of cardiac surgery at the Women’s and Children’s – yet they did nothing,” he said.

“Health Minister Stephen Wade must explain why he did not act upon receiving this report.

“Four babies have died, and four families deserve answers. This cannot be swept under the carpet. We cannot allow another baby to die.”

Svigos said: “The WCH Alliance would humbly ask how many more deaths of babies and young children will the community and the staff be forced to endure before the Minister of Health will cut across this unnecessary procrastination due to the inbuilt inability of the board and the CEO and the executive to make definitive clinical decisions, and move to solve this problem?”

He told the committee that SA spent $5 million a year sending 90 to 100 babies and children interstate for cardiac services.

He said the initial cost of establishing a surgery unit here would be $6 million and the ongoing cost would be $1 million a year.

Wade this morning said an initial report by clinicians had recommended introducing an ECMO service in SA, but not a paediatric cardiac surgery unit.

“It recommended against establishing a paediatric cardiac service because it said with the low number of cases coming through our service here in SA there would actually be worse outcomes to vulnerable children and babies in SA,” he said.

“The board has had further discussions with clinicians and is seeking further advice and will look at the recommendations again shortly.”

Svigos earlier told ABC Radio Adelaide that establishing an ECMO service without a cardiac unit was “a dangerous proposal”.

“(It) flies in the face of the UK, USA, Australia, New Zealand where they do not have a freestanding ECMO unit in any of those countries,” he said.

“It’s not safe, it’s not doable, we need a cardiac surgery unit with a dedicated paediatric cardiac surgeon as well as ECMO.” 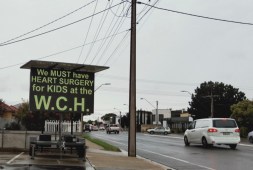 Svigos told the committee yesterday that clinicians had been left “demoralised”.

“They feel that they have let their patients down,” he said.

Mulholland told the committee doctors were experiencing “burnout and fatigue”.

“Essentially there is not enough staff, not enough resourcing, not enough allied health to run many of the services of paediatric medicine in this state,” she said.

“If something is not done about it then the legacy this will create for the women and children of this state will unfortunately be very grim.”

Mulholland said junior doctors were “sleeping on the floor because of a lack of resources”.

Svigos said SA was losing skilled doctors to interstate and overseas and that doctors were gagged by SA Health from speaking out about the issues, particularly in relation to deaths, which is why the WCH Alliance had been formed.