It comes after the Government, Opposition and crossbench last week unanimously supported a motion lodged by SA Best MLC Connie Bonaros in the Upper House calling for the Equal Opportunity Commissioner or another independent person to investigate the extent of harassment, including sexual harassment, in the industry.

The Upper House also wants the inquiry, which has the backing of the federal Sex Discrimination Commissioner, to consider whether an independent complaints body needs to be established whereby lawyers or members of the judiciary could make anonymous complaints about other legal practitioners.

Bonaros, a former lawyer who was the victim of alleged assault at a parliament Christmas Party last year, told Parliament that leadership to address harassment in the legal workforce “cannot come soon enough”.

“Of all the professions, it is very much my view that the judiciary, the legal profession and each and every member of this place, that is, our lawmakers, those people who are armed with interpreting our laws and applying our laws, should know better,” she said.

“It is abundantly clear that in many instances they do not.”

Bonaros was prompted to lodge the motion after a High Court investigation in July found former judge Dyson Heydon sexually harassed six young female associates when he was on the court, prompting more than 500 women working in the law to write to federal Attorney-General Christian Porter seeking changes to the way judges are disciplined and appointed.

But in a letter sent to Bonaros last week, SA Law Society president Tim White said a state-based inquiry was “unnecessary”, would “not effectively achieve the outcome it appears directed towards” and “probably delay the progress and implementation of measures currently well underway” to eliminate harassment in the legal profession.

“The Society understands that sexual harassment is a serious issue within the legal profession, and acknowledges and shares the valid concerns that underpin the motion,” he wrote.

“However… the existence of sexual harassment has already been established by a number of surveys undertaken at various levels capturing all subsets of the profession.

“Now is the time for action, which is precisely what is occurring.”

The SA Law Society reported a “concerning” level of bullying and harassment in the legal workplace following a survey it conducted in 2018.

The survey results, which are not available on the society’s website, showed a “disproportionate” number of victims were women in junior roles, and that the harassment often occurred in circumstances where there was a power imbalance between the victim and perpetrator.

In July, one day after Bonaros lodged her motion in Parliament, Chief Justice Chris Kourakis announced that representatives from the Law Society, SA Bar Association, Women Lawyers Association, Australian Association of Women Judges, Women at the Bar and the Adelaide Law School met to discuss “practical solutions” to address the issue of workplace harassment, as well as the need to encourage more reporting.

White wrote that the Law Society was also working with other societies and Bar Associations across the country to develop a national response to eliminate sexual harassment.

“This approach is appropriate given sexual harassment is a national issue, and a coordinated effort between state and federal governments, as well as professional bodies around Australia, is required to properly address it,” he wrote.

“The Society does not support the proposed inquiry as it is concerned the inquiry will not only overlap with and duplicate existing and previous work, but it is also likely to delay the significant measures currently well advanced.

“The society considers that the resources and effort required to undertake an inquiry would be better placed in developing training programs, resources and guidelines to address the issue of sexual harassment in the profession”

White wrote that the society had applied to the Law Foundation to receive $98,000 to deliver that training.

Greens MLC Mark Parnell told Parliament on Wednesday that “the profession is onto it”, but Bonaros’ proposed inquiry would “support initiatives like this, because the value of an inquiry is that is can help expose the extent of the problem, and it can bring on board more people, more members of the legal profession, to help stamp out this inappropriate behaviour”.

“I see current moves within the legal profession and this equal opportunity commissioner inquiry… to be complementary,” he said.

Bonaros added that whilst there was a “growing amount of work that has been done in this area”, an inquiry would ensure that everyone working in the legal profession could be helped. 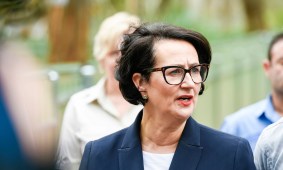 “I acknowledge the work the Chief Justice is doing in this area in terms of the review he has instigated, but I am also mindful of the fact that our Chief Justice, whilst everything he is doing is very admirable and very helpful for all of us, is somewhat limited in the scope of anything he does because his reach does not extend to the entire legal profession – it extends to the judiciary,” she said.

Human Services Minister Michelle Lensink said the proposed inquiry, which will be launched in the next three months, “has been broadly supported by the legal profession”.

White told InDaily this morning that the society would “of course cooperate with and do what it can to assist” with the inquiry.

It comes after parliament last week passed changes to the state legislation that allow judicial officers to lodge sexual harassment complaints about their colleagues with the Equal Opportunity Commissioner.