Premier Steven Marshall was yesterday forced to stop the sale of corporate suites for the 25,000-capacity event, run by State Government agency Events SA, telling Parliament he was “disappointed” but refunds would not be given for the boxes already sold.

This year’s pageant, usually held on on a weekend morning through city streets in front of large crowds of families and children, was cancelled due to the pandemic. But it was later rescheduled to be held at Adelaide Oval on the evening of November 14, with numbers strictly limited to 25,000 due to COVID-19 social distancing restrictions.

The Pageant will be live-streamed and feature floats, dancing and carol singing, and a visit from Father Christmas.

Families and children had to enter a free ballot in order to have a chance of attending the event.

But it was revealed yesterday that Pageant access could be bought through the hire of Adelaide Oval corporate suites.

Until ticket sales were removed from Adelaide Oval’s website on Thursday, tables of 10 were still available in the Ian McLachlan and Magarey Rooms for $1150, as well as five-person outdoor boxes at $525 and two $230 tickets in the Bodyline Bar.

It is unclear exactly how many of the 3000 corporate spaces at Adelaide Oval were sold, limiting the spaces available to the the public.

The Opposition today claimed that approximately 2000 tickets had sold at a minimum of $115 per ticket – raising at least $230,000.

Shadow Treasurer Stephen Mullighan said that estimate was based on figures provided to the media and ticket costings on the Adelaide Oval website.

But Premier Steven Marshall dismissed that, saying “I’ve become very sceptical about numbers that come from the Australian Labor Party”.

“I asked the SA Tourism Commission this morning [and] they think the revenue from this line is around about $35,000 – and all of that will go into defraying the costs associated with the Christmas Pageant in its form for tis year,” he said. 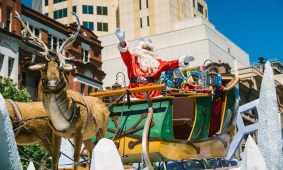 “Obviously there were calls for it to be cancelled, we’ve come up with a unique way for it to go ahead this year… hopefully next year we can return to the normal format.”

Pageant director Brian Gilbertson told The Advertiser that the sale of corporate suites was part of the conditions of using Adelaide Oval to host the event.

An Adelaide Oval Stadium Management Authority spokesperson told InDaily this morning that the oval was not profiting from the sale of the corporate suites.

“It (the oval) is providing a portal service to the venue hirer Events South Australia (this is consistent with all entities hiring the venue),” the spokesperson said.

“The revenue goes back to Events South Australia as the venue hirer.”