Attorney-General Vickie Chapman told InDaily that the Government would today support a motion lodged by SA Best MLC Connie Bonaros in the Upper House calling for the Equal Opportunity Commission or another independent consultant to launch a “comprehensive” investigation into the state’s judiciary.

The crossbencher wants the inquiry, which she said has the backing of the federal sex discrimination commissioner, to examine the prevalence of all forms of harassment within the profession.

It comes after a High Court investigation in July found former judge Dyson Heydon sexually harassed six young female associates when he was on the court, prompting more than 500 women working in the law to write to federal Attorney-General Christian Porter seeking changes to the way judges are disciplined and appointed.

The SA Law Society reported a “concerning” level of bullying and harassment in the legal workplace following a survey it conducted in 2018.

The survey showed a “disproportionate” number of victims were women in junior roles, and that the harassment often occurred in circumstances where there was a power imbalance between the victim and perpetrator.

“The State Government supports Ms Bonaros’ motion regarding an inquiry into sexual harassment in the legal profession,” Chapman said.

Bonaros, a former lawyer who was the victim of alleged assault at a parliament Christmas Party last year, today welcomed the Government’s support for her motion ahead of a vote scheduled for this afternoon.

But she questioned why the Government rejected a similar motion calling for the Equal Opportunity Commission to investigate workplace harassment among MPs and staffers at Parliament House.

Treasurer Rob Lucas last month said that funding the $152,873 investigation, which will go ahead with the support of the crossbench and Opposition, would pose an “issue” for the budgets of both houses.

“The Treasurer indicated that he wasn’t going to cough up the money for it, yet they have indicated to me that they will support an inquiry into the legal profession,” Bonaros said.

“I know that our two professions are not by any stretch the only two that have these issues, but we know that this is rife within those professions and that they’ve enjoyed a very outdated level of protection that has not been afforded to any other profession.

“That’s really what I’m trying to address through the motion.”

“It beggars belief that the same standards that the Government wants to examine in the legal profession won’t be applied to Parliament,” he said.

InDaily asked Chapman why the Government supported an inquiry into the legal profession and not parliament, but did not receive a response.

The inquiry into workplace harassment at Parliament House was due to finish in August, but the commission is yet to start investigating as it is still waiting for permission from both houses of parliament.

Upper House president Dawkins told InDaily this morning that he wrote to Lower House Speaker Josh Teague last month about the inquiry, but was yet to receive a response.

“On our side we’ve had some preliminary discussions with the acting Equal Opportunity Commissioner and we will certainly work with her, but as far as the other house is concerned we haven’t heard back,” he said.

“I’m keen to progress this – that’s why I made the statement quite soon after the motion.”

InDaily contacted Teague but did not receive a response.

It comes after parliament yesterday passed changes to the state legislation that allow judicial officers or members of parliament to lodge sexual harassment complaints about their colleagues with the Equal Opportunity Commissioner.

If a complaint is not resolved by conciliation, it will go before the South Australian Employment Tribunal.

A $2500 fine would apply to those who do not comply with the conciliation process.

Chapman said the changes addressed a “significant flaw in the existing legal framework” that brought parliament and the courts in line with community expectations.

“Sexual harassment is unlawful behaviour and, in this day and age, there is no reason why MPs or judicial officers should be immune from these laws,” she said.

“These changes will ensure MPs and judicial officers are held to account, for behaviour that is unacceptable in any workplace.”

However, under the changes, MPs and judicial officers are still unable to lodge complaints or have their grievances dealt with under the Equal Opportunity Act if harassment occurs during parliamentary or judicial proceedings.

The changes also do not allow members to raise past incidents of harassment with the Commissioner.

Bonaros said she was “really pleased” that Chapman had broadened the Equal Opportunity Act, but the changes were “far from perfect”. 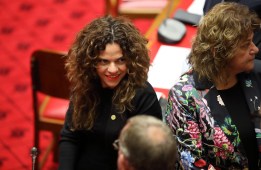 “If parliament is sitting and I am having zero to do with the debate that’s going on… and I walk past and sexually harass or grope or racially vilify another member of parliament that – even under the changes that we’ve just moved – will still be exempt because parliamentary proceedings don’t fall within the ambit of the legislation,” she said.

“There is a very grey line about what constitutes parliamentary proceedings and judicial conduct.

“No one should have a right to sexually harass someone regardless of the circumstances.”