The West End Brewery, on whose Port Road chimney the SANFL premiership team’s colours are decked each year in a quintessentially South Australian tradition, will close in June 2021, with Lion – a subsidiary of Japan’s Kirin – declaring the news “a sad day for the West End team, Lion and South Australia”.

West End and Southwark will continue to be brewed at Lion’s Toohey’s and XXXX plants in Sydney and Queensland, before a new, smaller brewery is constructed at an as-yet unknown interstate location.

Lion confirmed today 94 local jobs will be lost, although around 40 SA roles in sales and sponsorship will be retained.

SA Sales Director Jason Baily told reporters he had broken the news this morning to staff, “there was a lot of tears and a lot of them were mine”.

“Today, for me personally, has been a really challenging day, a really sad day,” he said.

“We’re like a family and it’s been a pretty emotional morning for us all.”

Lion Australia Managing Director James Brindley insisted the decision was “about long-term trends and the ongoing viability of the brewery”.

“Over the last few decades consumer preferences have changed, the beer market en masse continues to decline and is now at its lowest per capita consumption ever recorded in Australia, while 700 new craft breweries have sprung up so competition is intense… and the cost base continues to increase,” he said.

“No doubt COVID had a short-term impact… COVID certainly hasn’t helped it, but COVID’s not the driver of this decision.”

The company said in a statement it had been “operating well below its full production capacity for some time now and unfortunately this is no longer viable”, with the Australian beer market “in long-term decline for the past decade as Australian drinkers choose other beverages, like wine, over beer”, with per capita beer consumption dropping around 20 per cent in the same period.

“Our input costs have continued to rise against this backdrop of declining volume, and a further drop in draught beer sales as a result of the pandemic,” they said.

“Our priority right now is the wellbeing of our team here at the Brewery.”

Brindley said Lion had already been operating the facility at 50 per cent of capacity, and the move was “by no means a reflection on this fantastic hard working people here in this brewery”.

“A lot of people are feeling this news,” he said, noting Lion would invest in a West End Re-Skilling Fund of up to $1 million, on top of any potential redundancy payments.

“We really want to work with the SA Government to make sure that package supports our people and contributes to the state of SA,” he said.

He said West End has been “a part of SA for 160 years” and sponsord many sporting leagues, competitions and clubs, which it intended to continue.

“We have no intention of pulling any sponsorships – we’re going to keep our existing commitments and work hard to renew them,” he said.

Ian Roberts, Lion’s Supply Chain and Technical Director, said the company expected to sell the land but it was too early to consider specific uses.

They hoped to somehow retain the tradition of hoisting the SANFL Grand Finalists’ colours up the iconic chimney, and displaying the Riverbank Christmas Lights.

The company also said contracts for grain sourced from SA growers would be honoured.

Brindley added he could “certainly understand the sadness and the emotion”.

“I don’t think it’s a ruthless decision – we’ve gone out of our way to try and keep this brewery operating… this is nothing we take any joy in.”

“Their owner the Lion Brewing Company has decided to close the West End Brewery… so our thoughts are with those workers at the moment,” he said.

“We know that the coronavirus has affected the viability of so many businesses around the country, and we’re not immune from that here in South Australia – it’s a very sad day.

“They will be keeping quite a significant staff here in South Australia, because they will be continuing to sell into South Australia… but of course those production jobs at the iconic West End Brewery that we’ve all come to know and love over an extended period of time, they will be finishing up at the middle of next year.

“What we’ve seen is declining volumes through that brewery for an extended period of time, they made the decision that this was unviable going forward… what we’re told by the company is that there’s a continuing excess capacity in that brewery here in South Australia, they were just not getting anywhere near their full capacity, they’ve got to make tough decisions, many companies around the country are having to make tough decisions during this coronavirus…

“The West End Brewery is a South Australian icon and today we have lost an important part of our social and economic fabric… I hope the State Government will step up and provide support to these workers, as we have previously seen for workers at the likes of Holden and Coca-Cola,” he said,

“The sad reality is, once these icons go, they are lost forever.”

The United Workers Union slammed the decision as “a massive betrayal” of the workforce and the SA community “after the company received tens of millions of taxpayer money for an upgrade to the site” in 2013.

The union’s SA Coordinator of Food and Beverages Mark Whenan said members had been “shocked to hear today that Lion is scrapping this iconic South Australian brewery”.

“We are still working through what this means to our members at the brewery and how they want to proceed,” he said.

“However, the facts of the matter are that workers at West End brewery have continued to turn up every single day throughout the pandemic, delivering for their employer, Lion… in response, the company is savagely cutting their livelihoods.

“Lion has an obligation to their hardworking employees and to the South Australian community to provide good secure jobs throughout this crisis and beyond.

“They have benefited from the iconic SA brand for years and shouldn’t be compounding the state’s unemployment problem.”

The closure will be the latest blow for the once-thriving Port Road industrial strip, after Coca Cola and ES Wigg and Son also closed their operations in recent times.

“We’ve got a fair few drinkers in here that actually work on the production line, so it’s a sad day for those boys – it’s a bit of a specialist craft,” he said.

“I’ve been here now for 12 years, we’ve had Wigg’s next door – that [closure] was a massive loss to us, because at the moment there’s nothing going on in there.”

He said he was hopeful if the land was rezoned for residential development that would be a boon for local businesses such as his in the longer term. 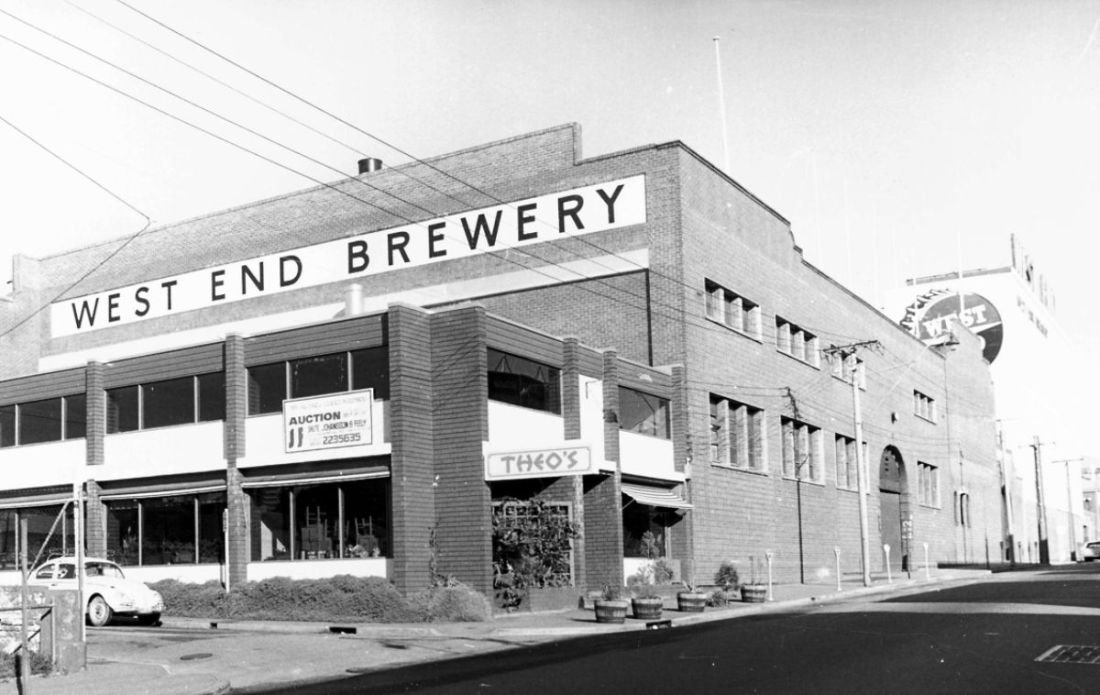 The West End Brewery site in Hindley Street in 1982. The premises was demolished a year later. Photo: State Library of South Australia

The West End Brewery was opened in Hindley Street in 1859. It was one of a growing handful of breweries in the colony, and developed a network of pubs across Adelaide to support the business.

The brewery merged with the the Kent Town Brewery and the wine and spirit business of Rounsevell and Simms in 1888 to form the South Australian Brewing, Malting, Wine and Spirit Company.

The wine and spirit side of the business was sold in 1894, leading to the establishment of the South Australian Brewing Company.

Production was concentrated at the original West End Brewery and remained there until 1980, when operations moved to the Southwark Brewery in Thebarton.

The West End Brewery premises in Hindley Street was demolished in 1983.

However, the Thebarton site remains a local community touchstone, hosting the annual Christmas display on the banks of the Torrens, and with the chimney sporting the colours of the SANFL premiership team and their vanquished opponent.