Anglicare’s Jobs Availability Snapshot found the average number of South Australian job seekers had grown from 9.1 to 10.3 between May 2019 and 2020.

South Australia recorded the second highest proportion of people competing for entry-level jobs, behind Tasmania which averaged 21 job seekers for each position.

The annual report found nationally there were an average of eight people competing for each position at their skill level, with more than 2.6 million people across Australia either unemployed or underemployed.

AnglicareSA CEO Peter Sandeman said an employment system overhaul was required to support people back into the workforce.

“With more than 10 jobseekers competing for each entry-level job, there’s little doubt that COVID-19 is worsening the South Australian job market, which was already failing those with the most significant barriers to employment,” he said.

“If we’re serious about helping people, we need to provide those out of work with a liveable income as well as create jobs at all skill levels – rather than forcing competition for jobs that just aren’t there.

“These changes are urgent. If we don’t fix this broken system, the number of people competing for each job will continue to escalate.”

Figures were taken from the federal department of employment, skills, small and family business and compared with job vacancies advertised online in May.

According to the Snapshot, the underemployment rate had increased by 47 per cent from May last year, while the number of people registered for the federal government’s Jobactive program more than doubled from 619,956 to 1,442,760. 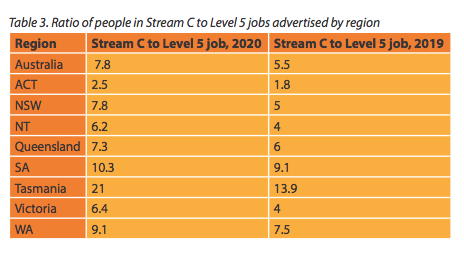 A screenshot from the Jobs Availability snapshot showed SA remains second in the country for proportion of job seekers looking for entry level work compared with advertised jobs.

Jobseeker recipients are required to engage with the program, which is run by privately owned employment service agencies and not-for-profit organisations.

A report released by think tank Per Capital in April estimated Jobactive would cost Australia an additional $210 million – on top of the roughly $1.3 billion the nation forked out to outsource the service each year – as a result of the increase in unemployment.

In order to receive welfare payments job seekers on the program are required to attend meetings with a job service provider and applying for up to 20 jobs each month.

Jobseekers who do not meet their requirements can be penalised and lose their payments.

Before the pandemic, JobSeeker – previously called Newstart – paid about $550 a fortnight, or $40 a day, a level unchanged for years and long criticised as being below poverty level.

As part of an emergency response to the pandemic, the unemployment benefit was effectively doubled to $1100 a fortnight.

Last month, the JobSeeker allowance for more than one million unemployed Australians was cut by $300 a fortnight, to about $58 a day.

“With record numbers of people out of work, we need to stop cuts to the JobSeeker payment. People shouldn’t be trapped in poverty while they get their lives back on track, especially when the research shows that the jobs aren’t there,” he said.

“Even with direct job creation and other measures to rebuild our economy, it will be some time before there are enough job vacancies to match those who want them.

“Enabling people who are out of work access to a liveable income would also provide a bedrock for volunteering and other kinds of participation to flourish at a time when communities are trying to heal, and better equip people to take up work again when the economy recovers.

“A liveable income is also good for the economy as those who need the money to live will spend it locally and grow the jobs they need to access.”