The Foundation yesterday “announced the launch” of the project – on the day of its agreed completion date with the State Government – after an ongoing saga that has already seen Zonfrillo embroiled in a legal brawl with the University of Adelaide and sue News Corp Australia for defamation.

The Government, however, said it had only received “a progress report… at this time”.

In a statement yesterday, the Foundation declared “the findings of the Database [had been] introduced to media and key members of the Australian Indigenous community” via an online conference featuring Wakka Wakka woman and Orana Foundation Board Director Jo Willmot, Arabella Douglas from Currie Country and Daniel Motlop from Something Wild Australia.

However, the contents of the Database “are currently with the leading Indigenous intellectual property lawyers in Australia, Dr Terri Janke and Company, to ensure all ethical research obligations are met and Indigenous Cultural and IP protocols have been followed”, the Foundation declared.

“After Dr Janke’s work is complete, the Database will be handed over to an Indigenous entity which will be the custodian of the Database moving forward.”

In a statement, Zonfrillo said: “It has always been our intention for Indigenous people to decide where to from here with the Database.”

“It could be a time capsule for traditional knowledge, it could be used by schools for education, it could be commercialised… whatever the future of the Database is, it will be decided by Indigenous people in a time and manner that they wish.”

The statement noted that the project was majority funded by the Department of Primary Industries and Regions, with the Foundation “commissioning The University of Adelaide as their research partner”.

However, the University was unaware of yesterday’s announcement, a spokesman telling InDaily: “The University of Adelaide was not aware that the Indigenous Foods Database was being announced today by the Orana Foundation and has not been contacted by the Foundation about its release.”

“Researchers from the University were contracted by the Orana Foundation to build, as one of four components in the project, a native food database of existing and new knowledge of Australian native food plants,” he said in a statement.

“The University’s researchers completed their work and the database was delivered to the Orana Foundation in May 2020.

“Any further enquiries should be directed to the Foundation.”

Zonfrillo told The Australian in July he had been embroiled in a nine-month fight with the University over the database, costing $50,000 in legal fees.

“Whoever it was at Adelaide University who decided to backflip, obviously I wasn’t going to have that,” he reportedly said at the time.

The Database has proved an ongoing controversy for Zonfrillo of late, with The Australian also reporting that the Orana Foundation had transferred significant funds to companies associated with the MasterChef host and his wife, Lauren.

A subsequent article in the same newspaper prompted Zonfrillo to launch legal action, with the Sydney Morning Herald reporting last week that a statement of claim lodged in the federal court argues the chef was defamed by the News Corp-owned paper “suggesting he cynically pretended he had a genuine commitment to assisting an Aboriginal community for the purpose of obtaining an award and prizemoney”.

Jo Collins, PIRSA’s executive director of Agriculture, Food and Wine said in a statement that the project’s original completion date had been extended to September 30 “and the expiry date for the funding deed is October 31, 2020”.

“At this time Orana Foundation have provided a progress report to the Department of Primary Industries and Regions,” she said. 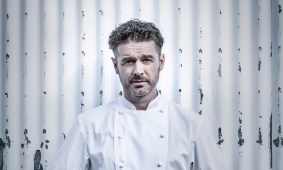 “Major project components which relate to research and enterprise development have been delivered with reports detailing that delivery provided to the department.

“The Department has received regular six-monthly milestone reports from the Orana Foundation since mid-2017 as required under the deed, along with other updates.”

The Indigenous Food Database is to see 1443 ingredients “compiled together for the first time from published literature on Indigenous uses, specific scientific knowledge and species bioclimatic envelope information that has been outputted as maps on where to find them in Australia”, the Foundation says.

The Adelaide eatery which spawned the foundation’s name, meanwhile, remains closed. It’s prospects of reopening appear slim, with the Zonfrillos recently settling on the sale of their Summertown estate ‘Caledonia’, after a caveat placed on the property was lifted by creditor Thorn Australia Pty Ltd.