The relaxing of South Australia’s COVID-19 border rules has prompted airlines to add more domestic flights to the eastern states in coming weeks to cater for an expected boost in demand.

Last week SA lifted the quarantine requirements for people coming from the ACT and will do the same for travellers from NSW from tomorrow, in time for next week’s school holidays.

The airline has flagged adding even more flights from November.

Qantas is also expected to add flights from Sydney to Adelaide this week along with budget airline Jetstar.

The long-awaited decision on SA’s border with NSW was made at yesterday’s meeting of the state’s transition committee and came after initial plans to lift the isolation measures were stalled for weeks because of a cluster of coronavirus cases in Sydney.

“This is going to be a relief that will be felt across our state, from an economic perspective and from a family perspective,” Premier Steven Marshall said.

“We know that this has been a massive burden on the business community and also on families and individuals.”

The premier said health officials had examined the concerning case of an infected Sydney taxi driver but were satisfied it was a risk that could be managed.

Chief Public Health Officer Nicola Spurrier said the decision to ease the border measures came after 14 days of no community transmission in NSW involving cases with an unknown origin.

She urged anyone travelling between SA and NSW to keep a close eye on the latest information in relation to coronavirus cases in Sydney and called for all travellers on planes to wear masks.

SA reported two new coronavirus cases on Wednesday – a couple from overseas who are both in quarantine.

SA health said the man and woman, both in their 20s, tested positive on their day one test and will remain in isolation at their medi-hotel.

Chief Public Health Officer Nicola Spurrier said she wasn’t concerned about the case, however she did apologise to a security guard at the hotel who was potentially exposed to infection.

That guard is now also in quarantine.

“When this family had additional tests done last evening one of the security guards that was there helping out was unfortunately too close to where that procedure was done,” Spurrier said.

“I do apologise directly to that hotel security guard who was doing a fabulous job but was unfortunately put in that situation of not being entirely safe.”

She said this afternoon the exemptions should not have occurred because they did not fall under the usual reasons of compassionate or medical grounds.

“This was an inappropriate decision by one member of the SA health exemption committee,” she said.

“Our normal process is that we would have a full panel meeting.

“Our health exemptions really should be people with compelling compassionate reasons.”

Five of those family members are already here in hotel quarantine at their own expense.

Spurrier has revoked the exemptions for the other six relatives “because it is absolutely entirely inappropriate at this point in time”. 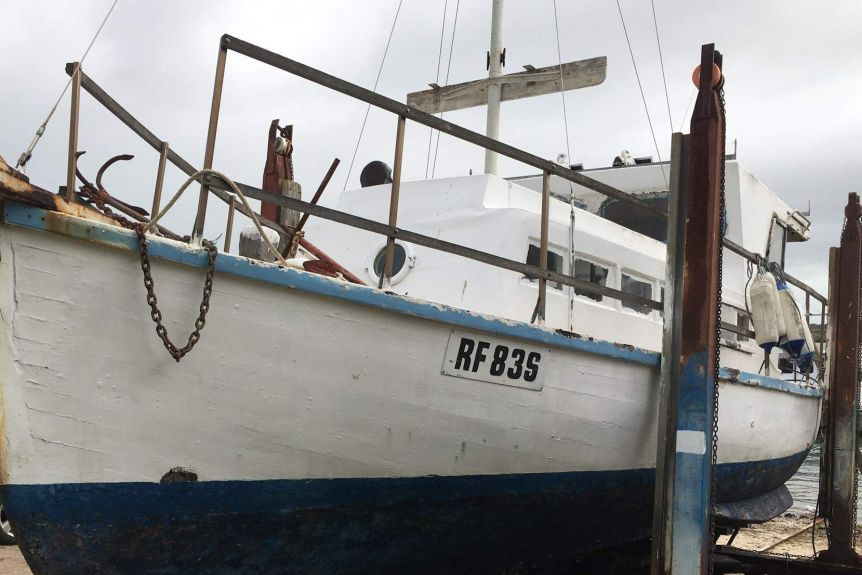 A search is on for the missing boat Margrel near Granite Island, less than two weeks after the boat and its occupants were rescued on the Coorong coast. Picture: SA Police

Grave fears are held for a fisherman missing for the second time this month off the South Australian coast, with “treacherous” weather conditions hampering an emergency search.

Authorities launched a second search for the Margrel on Tuesday morning after the man on board, Tony Higgins, reported it was taking on water in rough seas off Granite Island, south of Adelaide.

A wallet containing Higgins’ identification was found washed up on Goolwa Beach on Wednesday by a member of the public, along with other personal items.

A commercial fisherman earlier discovered a number of items of debris washed ashore several kilometres from the Murray Mouth.

SA Police have been unable to search open waters in the same area using a fixed-wing aircraft because of the rough conditions, instead focusing their efforts on the coast.

“It’s impossible to see anything from the sky, that’s why we’re not using PolAir (police helicopter) or the fixed-wing across the ocean,” Inspector Gus Sickerdick said on Wednesday.

“They just can’t see anything. To put a boat out there or a jetski or something like that would be treacherous. The surf is really, really rough.”

Sickerdick said the fixed-wing aircraft would do another coastal run on Wednesday afternoon and again on Thursday morning.

Police will also scour the coast to see if anything else washes up, having already conducted land searches from Encounter Bay to Murray Mouth.

“We always hope that we do find him alive. Obviously as it goes on, the chances of doing that are diminishing,” he said.

“We’ve got to bear in mind the conditions, the nature of the surf and if he is in the ocean, how it is affecting him and if he’s got anything to protect himself from all of that.”

Higgins’ family has been updated and is helping police with the search.

“Obviously they are distressed,” Sickerdick said.

New coronavirus cases in Victoria has dropped to 15 this morning while the state recorded another five deaths, taking its toll to 771 and the national figure to 859.

There was also good news on cases with an unknown source over 14 days, with that figure dropping to 41 in Melbourne.

There are none in regional Victoria.

Authorities want Melbourne’s new case average between 30 and 50 before they consider easing restrictions next Monday.

But aged care remains a key issue for Victoria in its second wave.

It prompted Health Minister Jenny Mikakos to rebuke AdventCare Whitehorse in Nunawading after its staff were filmed last week dancing and mingling with residents without masks.

Mikakos noted aged care workplaces made up 73 per cent of active healthcare staff infections, which numbered 74 on Tuesday.

“Whether it’s pyjama parties or this, it’s really just not good enough,” she tweeted.

Premier Daniel Andrews said no final decision on restriction changes would be taken until the weekend, with any confirmation likely to come on Sunday.

Hundreds of pilot whales have likely died on Tasmania’s remote west coast in what experts say is the state’s biggest mass stranding in recorded history.

A second group of 200 whales was discovered at Macquarie Harbour this morning, taking the overall number to around 470.

They were spotted from air further inside the harbour, some 7-10 kilometres from the original sandbar rescue site where about 270 got stuck on Monday.

“From the air they didn’t look to be in a condition that would warrant rescue, most of them appeared to be dead,” Mr Deka said.

“If they can be saved we probably will send crews over there.”

Further assessment of their condition will be undertaken by boat.

Ongoing rescue efforts have returned about 30 whales from sandbars to open ocean but several got stranded again.

About a third of the initial 270-strong group are thought to have died, and more information about their condition expected to be known later on Wednesday.

Their chances of survival have been aided by cool and overcast weather.

The pod may have been drawn into the coast to feed or by the misadventure of one or two.

“It’s really likely this was the one stranding event of a big group. This would have been one big group offshore,” Dr Carlyon said.

Experts have labelled the operation “one of the trickiest” due to the number of animals and unique tides in the area.

Authorities are also considering how to handle the grim task of getting rid of the carcasses.

About 93 per cent of Australians want to continue working from home after the coronavirus pandemic despite more than half taking on additional tasks or hours, according to an inaugural survey.

The first Work From Home Sentiment Survey by freelance marketplace Fiverr found people spent an average of $450 on setting up home offices, which would put the nationwide bill at more than $2 billion.

Three-quarters of people are satisfied with the overall experience of working from home but acknowledged challenges.

The survey quizzed 1007 people about attitudes to remote work.

Respondents’ main issues were setting clear boundaries between home and work, with 44 per cent saying it was a challenge, while 43 per cent reported too many distractions.

Taking regular breaks (38 per cent), collaboration with co-workers (33 per cent) and internet connectivity (31 per cent) were also common challenges.

More than half (52 per cent) felt they were taking on additional work or doing longer hours while at home during the pandemic.

While about one-third of people wanted to work from home full-time, the figure soared to 93 per cent when extended to those who want the option in some form.

Internet connectivity (72 per cent), limited distractions (61 per cent), a dedicated workspace (57 per cent) and setting clear boundaries between work and personal life (50 per cent) were seen as critical. 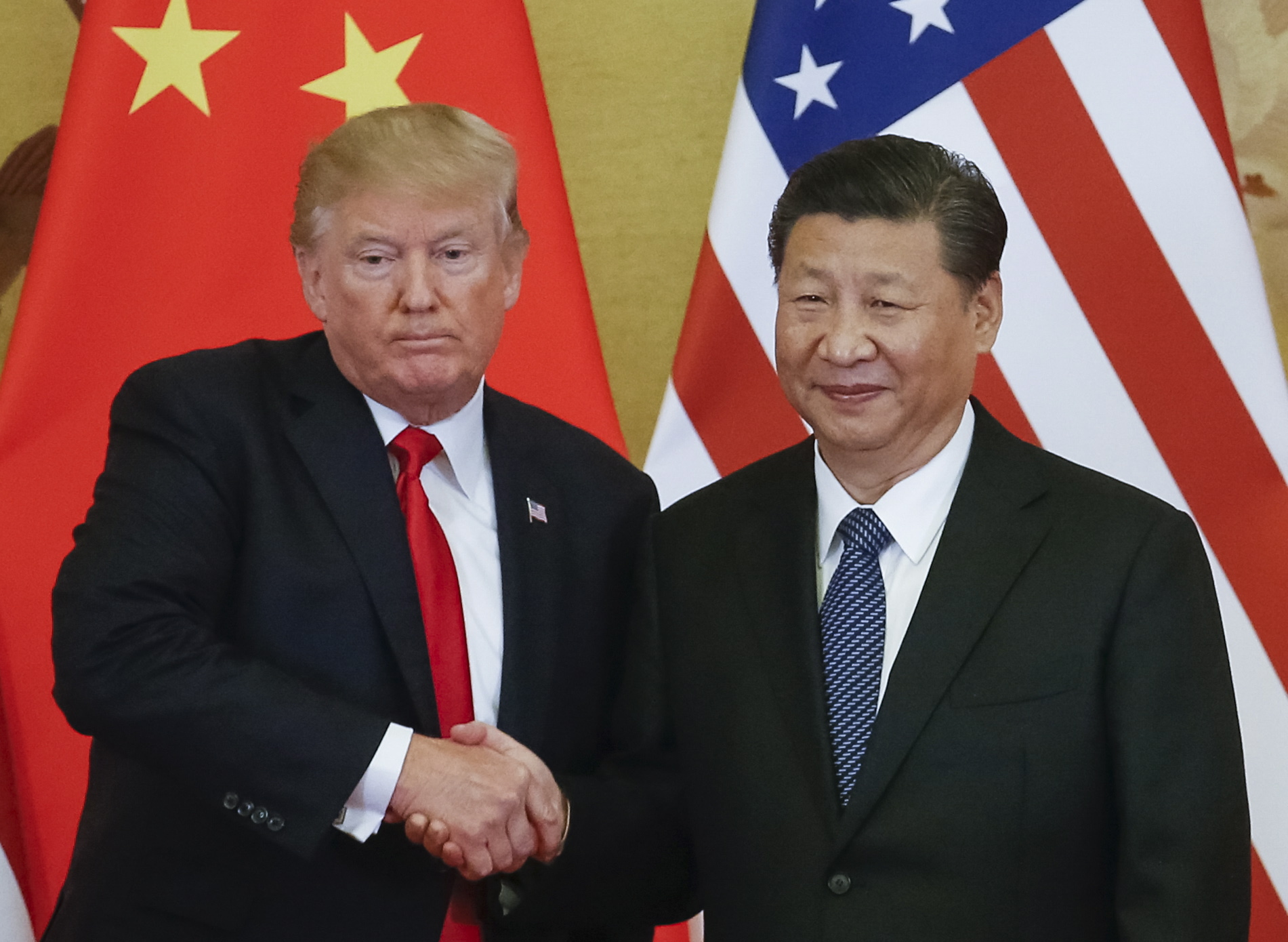 China does not aim to engage in a new cold war, President Xi Jinping has told the United Nations General Assembly in a video speech.

“China is the largest developing country in the world, a country that is committed to peaceful, open, cooperative and common development,” he said.

“We have no intention to fight either a cold war or a hot one with any country.”

UN Secretary General Antonio Guterres had earlier warned of a new cold war between China and the US.

Xi also spoke in favour of multilateralism and the safeguarding of the international system with the UN at its core.

“Burying one’s head in the sand like an ostrich in the face of economic globalisation or trying to fight it with Don Quixote’s lance goes against the trend of history,” he said.

“The world will never return to isolation and no one can sever the ties between countries.”

In his speech, US President Donald Trump will tell the United Nations General Assembly it “must hold China accountable for their actions” related to the coronavirus pandemic.

“The Chinese government, and the World Health Organisation – which is virtually controlled by China – falsely declared that there was no evidence of human-to-human transmission,” Trump will say, according to excerpts released ahead of delivery overnight.

“Later, they falsely said people without symptoms would not spread the disease … The United Nations must hold China accountable for their actions,” he will say.

Trump taped his speech on Monday at the White House for delivery remotely to the General Assembly, which convened virtually this week.

Data compiled by Johns Hopkins University shows the US has the highest number of fatalities in the world, as well as one of the worst figures on a per capita basis, though differing methodologies across countries make comparisons difficult.

The country also leads the world by far in the number of confirmed coronavirus cases, at more than 6.8 million, followed by India and Brazil.

Globally, more than 31.32 million people have been reported to be infected by the coronavirus and 964,365​ have died.

The month of October has many festivals celebrated in the Indian subcontinent including Diwali – a festival of lights celebrated by Hindus, Sikhs, Jains and others.