Mawson MP and Richmond sympathiser Leon Bignell’s Australian Kelpie Dusty – his name a tribute to two-time Norm Smith medallist Dustin Martin – was one of seven in his litter to survive summer’s devastating Kangaroo Island fires that razed his owner’s home.

Six of the seven pups were given away, with Bignell a beneficiary – even declaring the canine on his parliamentary register of interests.

But now parliament officials have told him they’re not interested.

Upon arrival to the building this morning, Bignell and Dusty – a regular visitor to North Terrace in recent months and a minor political celebrity who even boasts his own Facebook page – were turned away by security staff, who metaphorically gave the Kelpie one of his namesake’s famous fend-offs. 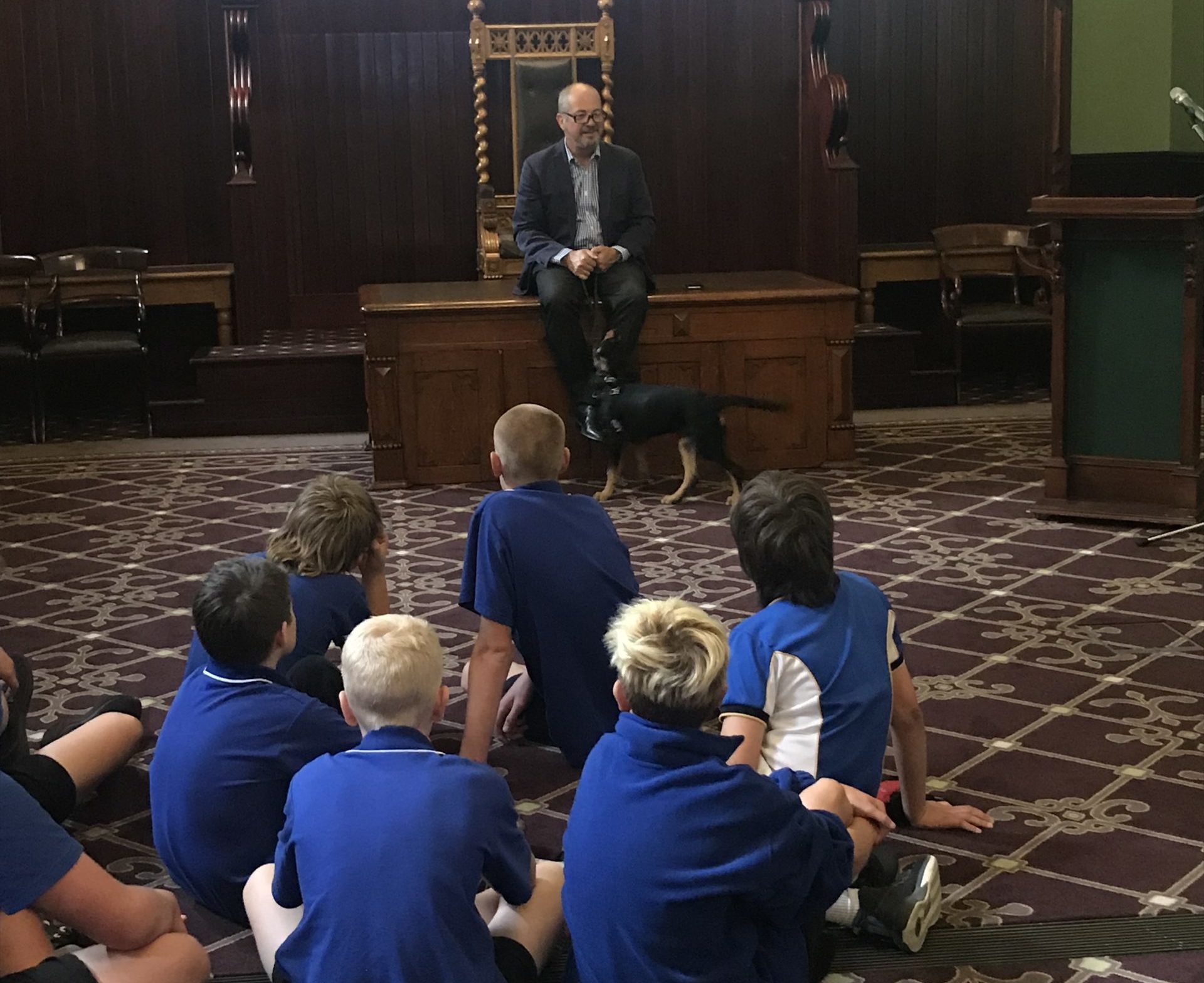 “The only animals permitted into Parliament House are accredited assistance/service animals, such as guide dogs, who have been trained by the relevant organisation and are identified as such,” the email said.

“It is not appropriate for other animals to be brought onto the premises for a number of reasons, including potential allergies of other building occupants, sufferers of asthma, fear of particular animals, noise concerns and the potential mess or damage that could be caused to the building and furnishings.

“Thank you for your co-operation.”

Bignell was unimpressed – not least because today is, of all things, ‘International Dogs In Politics Day’, a US-spawned tradition dating back to 1952, when Richard Nixon made his famous ‘Checkers Speech’ defending the cocker spaniel his family had received as a gift.

“It’s quite incredible – there’s been no discussion about this and no complaints at all,” Bignell told InDaily.

“The most ridiculous aspect is today is actually International Dogs In Politics Day – and the Clerk seems to have taken it upon himself to come out and say ‘dogs can’t come in here’.

“It’s not like Dusty’s done a shit in the House, or anywhere else… he comes in for about an hour at a time.”

He said the pooch had “probably been in five times in the last few months”.

“Today my partner had to go to a meeting so Dusty was with me for about an hour and a half [but] the security guards had been informed he can’t come in… there was no discussion about it first – where’s the democracy in this place?”

ENOUGH TO MAKE A KELPIE CROSS: Dusty, again going where he is not permitted. Photo: Facebook

Bignell said Dusty was popular with MPs on “both sides of the House” – a living embodiment of the adage often attributed to Harry Truman: “If you want a friend in politics, get a dog.”

Although, he adds, “Harry Truman didn’t actually say it because he didn’t like dogs”.

Nonetheless, he insists, “no-one’s complained to me about Dusty coming in occasionally”.

“Of all the things they’ve got to worry about in the world, and they’re worried about someone bringing a dog,” he lamented.

“It’s not like he runs around the corridors, he’s always on a lead… I’m not going to die in a ditch about it, but it seems a little weird.”

Today is international dogs in politics day. Celebrated on September 23 to commemorate a live television broadcast in…

The officious email was reminiscent of Crump’s 2018 missive decrying a Parliament House poo fiend, who had “on numerous occasions during recent sitting weeks… significantly soiled the Gentlemen’s toilets across a number of floors”.

“It has been left to the cleaning staff and Building Services Officers to clean up the mess left by the person responsible,” he wrote at the time.

“To encounter an environment like that surely leaves a very distasteful and lasting impression of the institution.”

Bignell’s colleagues rallied around the MP’s canine companion today, with Shadow Treasurer Stephen Mullighan declaring: “As far as we’re aware, there haven’t been any complaints about Dusty or his cleanliness – and judging by past issues the parliament has had, he seems better behaved than some in the building.”

Proposed changes to the Evidence Act to be introduced to parliament today will allow companion dogs such as Zero to accompany vulnerable witnesses while they are giving evidence in SA courts.