Penny Wright, who is legislated to advocate for abuse victims in state care, says she only learned of the alarming case from media reports and wasn’t officially informed until yesterday – a week after the predator was jailed and eight months after the abuse occurred.

The victim, who is under the legal guardianship of the Child Protection Minister, was preyed upon in January by a pedophile who groomed her using the teenage dating app MyLOL.

She became pregnant to her abuser and later had an abortion.

The State Opposition has called for an independent investigation into the case, after it was revealed Child Protection Minister Rachel Sanderson only found out about it after the man was sentenced.

Now it’s apparent she wasn’t the only one kept in the dark.

Wright has told InDaily she only learned of the incident via media reports last week.

She wasn’t officially informed by the department until yesterday.

“This highlights the fact that the Guardian has a particular role to advocate for any child in care who may have suffered sexual abuse but I don’t currently receive all the information I need,” she said.

“I’ve been raising my concerns about this issue with the Minister since May and the fact that I don’t have the information or staff resources I need to identify the extent of the problem and analyse system failings.”

Wright said despite former judge the late Ted Mullighan’s damning 2008 report into the sexual abuse of children in care, “unfortunately, some of the same issues are still occurring”.

“One of the recommendations of that inquiry was that it be mandatory for the department to notify the Guardian whenever a child in care makes an allegation of sexual abuse, but this was not actioned at the time due to lack of resourcing – and is still not happening,” she said.

“To do my job properly and give accurate advice about the changes needed to protect children, I need to receive all notifications of abuse and have staff capacity to properly process them.” 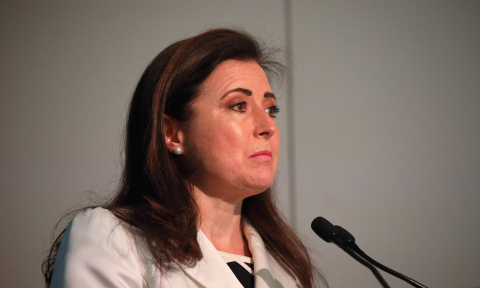 Matthew James McIntyre, 35, was sentenced last Monday to three years and nine months in jail for his abuse of the 13-year-old girl.

She said despite attempts by the girl to end communication, McIntyre “persistently expressed a desire to meet up with her for sexual intercourse, even saying that you wished to get her pregnant”.

He sent graphic photos to the girl and asked her to reciprocate, “including asking her to send one of herself in her new school uniform”.

“At one point, somewhat oddly, you expressed a wish to adopt her and introduce her to your girlfriend and daughter,” Judge McIntyre told the predator.

“It is clear from the text messages she lived in care and had several personal issues.”

Wright said the case was not an isolated incident of abuse against children in care but that it was difficult to know the full extent of the problem because of a lack of communication.

“Speaking generally, we know that there are children who experience sexual abuse from people who are not carers and employees in the system,” she said.

“Many of these kids live in residential care and are particularly vulnerable to abuse by people in the community, and sometimes their peers.

“This is definitely occurring but, because I am not consistently notified of these incidents, I don’t know the size of the problem.”

The case in question was reported to police after a youth worker at the residential care facility discovered a large number of disturbing text messages on the girl’s phone from her abuser.

Wright said the department systematically notifies her about some allegations of sexual abuse that constitute “care concerns”, for example where a child has been allegedly abused by a carer, employee or volunteer of the department or an agency.

“But that arrangement does not cover other alleged abuse – called ‘extra familial’ sexual abuse – by members of the community or by peers,” she said.

Her office only becomes aware of some of those incidents “on an ad-hoc basis”, for example, if a young person tells her staff “or we find out by attending a meeting for a different reason and it happens to be raised”.

The Guardian said the delay in notifying the Minister was also worrying.

“Although I am not privy to the communication arrangements between the department and the Minister, I was surprised and concerned to hear that she only learned of a significant matter like this last week,” she said.

Wright said there were many initiatives that would reduce the risk of sexual abuse for children living in residential care, including improved decision-making about which children live together.

In a statement, a spokesperson for the Child Protection Minister said the Guardian “is notified of serious care concerns that relate to sexual offences against children and young people in care”.

“We remain committed to continuing to work closely with the Office of the Guardian for Children and Young People to ensure the best possible outcomes for our most vulnerable children and young people,” she said.