The Liberal Party is preparing for Saturday’s AGM at which the moderate faction is expected to formalise its renewed control of the state council and governing state executive, while the ALP is seeking to tick off a list of preselections in Liberal-held marginal seats.

Nominations for Labor preselections close tomorrow, however InDaily understands the candidates backed by party powerbrokers in King and Elder are facing a challenge.

Tea Tree Gully councillor Brett Rankine has nominated for the inner northern suburbs seat of King, while defeated MP Annabel Digance is keen to make a return to her former seat of Elder.

Digance did not return calls or messages today, but several insiders have told InDaily she has picked up a nomination form and is taking soundings about challenging presumptive candidate Nadia Clancy, who ran for Boothby in last year’s federal election.

“People up here want a local and I think that Labor will do better up here with someone who knows the people, knows the area and understands the issues,” Rankine told InDaily.

“The seat of King is obviously going to be a critical seat in the next election, and Labor will need to win it in order to form government… I think that having somebody who is local, that people know and that already has a strong brand will give us a better chance of winning it.”

Rankine said “our people need to understand that Golden Grove”, the centrepiece of King, was akin to “a country village”.

“It’s built around being a village – it’s like a little country town [where] everybody knows everybody… it would be akin to somebody going into a country or regional town with no connection and expecting to be able to win a marginal seat – it just doesn’t happen,” he said.

“They need and want a local to represent them.”

It comes as the Liberals prepare to finalise a range of elected backroom positions, including the election of four vice-presidents and the party presidency.

The splintered Right faction, which seized control of the party at last year’s meeting, is set to be quickly marginalised, with incumbent vice-president Morry Bailes, who was initially expected to run for the presidency unchallenged, now understood to have withdrawn his nomination to continue as vice-president.

The presidency will be contested between current vice-president and country medico Max van Dissel, and former long-serving MLC Legh Davis, who today added some star power to his campaign.

Davis is moderate-backed, but is expected to garner significant support from sections of the conservative Right – support that will be bolstered by the endorsement of former PM John Howard.

In a letter he says should be “widely circulated”, the party’s most successful leader since Menzies enthuses about Davis’s “long years of service to our cause in a variety of capacities”. 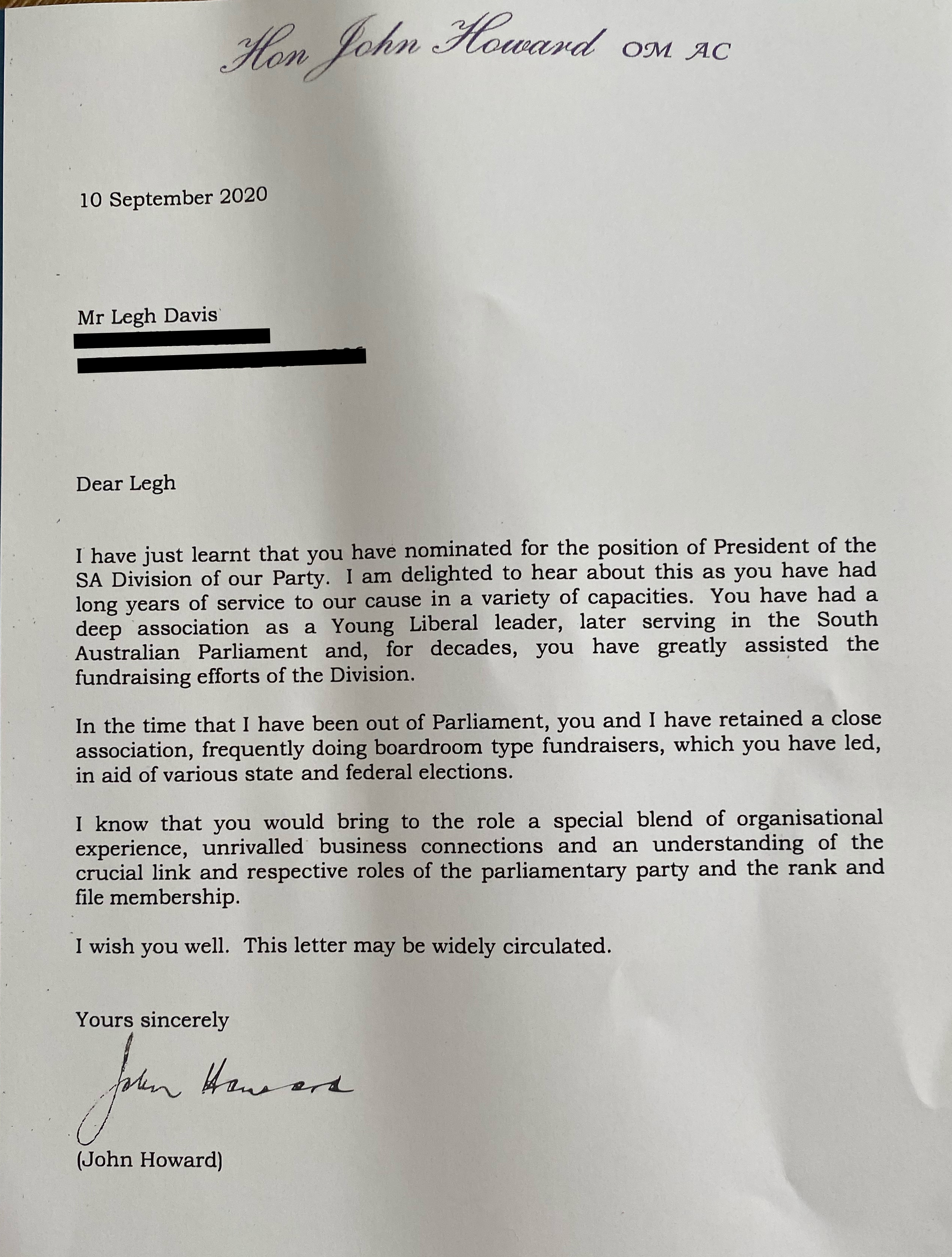 “I know that you would bring to the role a special blend of organisational experience, unrivalled business connections and an understanding of the crucial link and respective roles of the parliamentary party and the rank and file membership,” he writes.