The move is at odds with a State Government plan to lift a moratorium on GM-free crops in South Australia, which has been in place since 2004.

So far, Mount Barker, Barossa, Onkaparinga and Yankalilla councils have voted to request to remain GM-crop free while Adelaide Hills and Alexandrina councillors will vote on the issue next week after consulting with their communities.

It will be up to new Primary Industries Minister David Basham to give final approval to the requests.

The push has been driven by leading Australian wine regions including McLaren Vale, Barossa and Adelaide Hills, which say millions of dollars of exports are at risk if their areas allow GM crops to be grown.

Barossa Council was among the first this month to vote to request its region remain GM-free after 85 per cent of the 112 submissions it received supported the ban being maintained.

Light Regional Council covers about 40 per cent of the Barossa Valley wine region on its north-western flank including Seppeltsfield, Gomersal and Greenock.

It has decided not to apply for the designation for its entire district but has instead asked Basham to consider designating the part of its jurisdiction within the boundaries of the famous wine district GM-free.

Barossa Grape and Wine chief executive James March said the association would also ask Mid Murray Council to do the same for the small portion of its area that covers Eden Valley.

“Light Regional Council acknowledge that grape and wine producers have different interests to grain growers and others in their council boundary but at the moment the state government request doesn’t allow for any flexibility within that,” he said.

“But they are asking if they can work with them and the wine industry to address the concerns.

“If the legislation enables it then that is absolutely our preference to maintain the GM-free designation for the entire Barossa GI (geographic indication).”

March said establishing a GM-free swathe from the Barossa through the Adelaide Hills to McLaren Vale and possibly even the Langhorne Creek wine region would be a good result for the SA wine industry.

“There remains that connection between wine regions that all have an export focus and fall under the South Australian brand so if we can also have that segmentation to remain GM-free then that definitely works as a competitive advantage,” he said.

“It would also align with the character preservation act that we share in common with the McLaren Vale area, the Mount Lofty Ranges World Heritage Bid to preserve the peri-urban and semi-rural connection, which is very important for us.

“It’s another strand to our competitive edge and marketing efforts where we’re competing internationally with other regions to maintain that connection and preference for consumers that want wine that is regarded as clean, green and sustainable.” 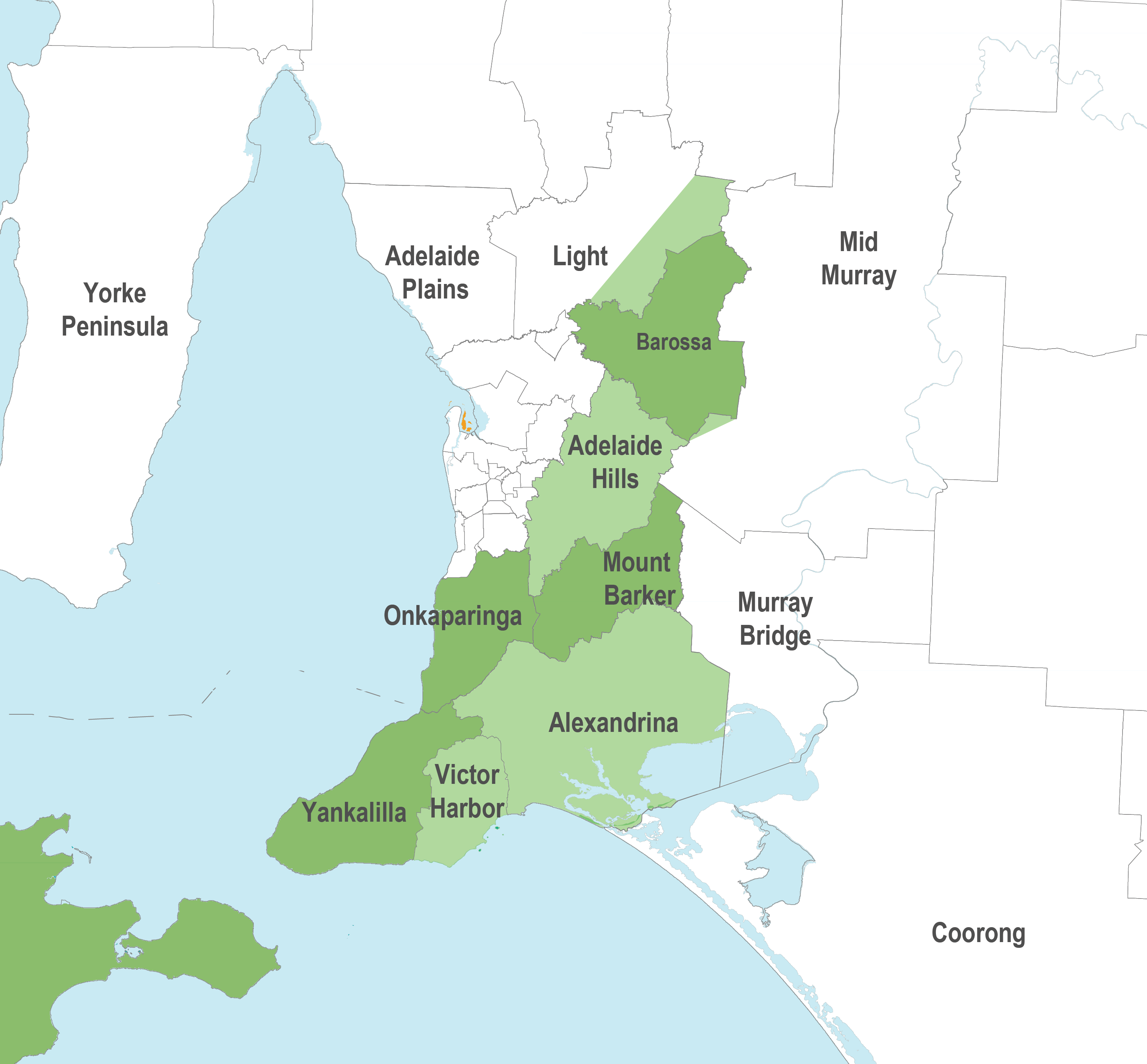 A number of SA councils, marked in dark green, have voted to keep their regions free of GM crops while others, in light green, are soon to decide if they too will make a bid.

All other mainland states allow genetically modified crops to be grown, with canola and cotton the first to be approved for growth in Australia.

It found that the lifting of the ban would damage the island’s grain industry, as all of its canola is exported to Japan to be sold as ethically produced, single-origin and GM-free canola.

Legislation lifting a 16-year-old ban on genetically modified crops in SA was passed by state parliament in May.

This sparked a process allowing councils until September 30 to apply to be GM-free if they consulted with their local community and demonstrate an economic benefit.

The applications will now be assessed by the GM Crop Advisory Committee before Basham makes a final decision, which is expected mid-November in time for potential GM planning ahead of the 2021 canola season.

The state’s largest council, Onkaparinga, voted on Tuesday night to support the GM-free bid after it found the lifting of the moratorium had the potential to cost the McLaren Vale wine region, which has a high proportion of organic and biodynamic vineyards, a potential annual loss of $20.8 million.

Yankalilla Council unanimously passed a similar motion on Tuesday night after its consultation found 87 per cent of community responses and 71 per cent of responses from primary producers were in favour of remaining GM-free.

“Our district has many small organic farmers that could be impacted by any trace of GM crops with immediate loss of certification, so we wish to support these farmers to continue their current business models.

“The common themes we heard during our consultation were the concerns about threats to the regions marketing position of a clean and green environment, risk of financial loss, risks of contamination from GM crops, environmental damage and loss of biodiversity, greater use of pesticides and chemicals and having GM crops would jeopardise access to GM-free markets and export opportunities.”

Mount Barker District Council voted on September 7 to write Basham requesting it be declared a non-GM crop area after 87 per cent of 143 submissions it received on the matter supported non-GM crop designation.

Mount Barker takes in about a third of the Adelaide Hills wine region but also has areas near Callington where canola is grown.

Neighbouring Adelaide Hills Council has completed its consultation on the issue and will decide if it will also petition the State Government to remain GM-free when it next meets on September 22.

She said $17 million a year of Adelaide Hills wine exports were at risk if the non-GM designation was not approved.

“We know from submissions that were made publicly to McLaren Vale Grape wine and tourism that there are a number of key markets that would find it very difficult to market wines from a non-GM region,” Carlson said.

“We’ve made our submission very clear that from our perspective there’s nothing to be gained from a lifting of the ban and there’s only risk to our markets so we certainly hope that it remains in place.”

Alexandrina Council covers the eastern portion of the Fleurieu Peninsula including Goolwa, Strathalbyn and the Langhorne Creek wine region. It also takes in vineyards in Currency Creek and a small portion of the Adelaide Hills wine region.

Its councillors will vote on the GM-free designation on September 21.

Victor Harbor Council completed its community consultation this week and will vote on the issue at its September 28 meeting.

Basham said councils had a one-off opportunity to state their case before the September 30 deadline.

“Applications must include consultation with the local community and need to demonstrate there will be an economic benefit from businesses being able to claim the council area is an area where GM crops cannot be cultivated.

“This should be an economic benefit above and beyond claiming on the product label their produce is GM-free.

“An independent review found so-called price premiums for South Australia being GM-free were a myth and the moratorium has cost our state’s grain growers at least $33 million since 2004.”