Onkaparinga councillors will decide tomorrow night (Tuesday, September 15) if they will ask for the district to be given non-GM crop designation following months of public consultation.

Legislation lifting a 16-year-old ban on genetically modified crops in SA was passed by state parliament in May.

This sparked a process allowing councils six months to apply to be GM-free if they consulted with their local community and demonstrate an economic benefit.

It found that the lifting of the ban would severely damage the island’s grain industry, as all of its canola is exported to Japan to be sold as ethically produced, single-origin and GM-free canola.

The applications are due by September 30.

However, a yes vote from the council will not be the end of the matter as the application will then be assessed by the GM Crop Advisory Committee before the State Government makes a final decision, which is expected mid-November in time for potential GM planning ahead of the 2021 canola season.

The state government is yet to receive any formal applications on the issue but it is understood several other councils are considering the matter.

Onkaparinga Council, on the southern outskirts of Adelaide, is the state’s most populous local government area with about 173,000 residents and several semi-rural areas including the entire McLaren Vale wine region.

In its draft application to Primary Industries Minister David Basham, the council says evidence provided by four McLaren Vale wineries shows $5.1 million of export value per year is at risk. Further modelling indicates this could be at least $20.8 million per annum across the region.

McLaren Vale is known for its premium Shiraz and Grenache and is Australia’s fifth-largest wine region by value. However, it is the largest when it comes to the area of certified organic or biodynamic vineyards.

About 37 per cent of the region’s 7324ha of vines are certified, which compares to a national average of about 5 per cent.

The McLaren Vale Grape Wine & Tourism Association represents all 460 grape growers, 180 wine producers and dozens of tourism operators within the McLaren Vale wine region and has led the push for Onkaparinga to maintain its GM-free status.

In a submission to the council, MVGWTA said the businesses it represented generated $500 million a year in gross regional product.

According to the association, grapes from the below-average yielding 2020 vintage had a value of $56.4 million, which was more than half of the council area’s regional product for agriculture. This compared with commercial grain crops of $900,000, or less than 1 per cent of local agriculture production.

MVGWTA general manager Jennifer Lynch said McLaren Vale had an international reputation for being clean and green that would be significantly tarnished if it lost its GM-free status.

“There is an absolute threat to multi-million-dollar export contracts for our wine producers if they lose organic or biodynamic certification as a result of GM crops being grown here,” she said.

“When you consider that in round numbers 40 per cent of our region is certified, to enable GM crops to be grown here and risk the certification of these vineyards would be disastrous because so many of our vineyards have production and therefore trade agreements with international importers, distributors, wholesalers and retailers that have a specific preference for organic and biodynamic wines.”

Lynch said the potential for McLaren Vale to become the first wine region in mainland Australia to preserve its GM-free status could become another marketing advantage for the region.

However, she conceded there was an “inherent risk” new Primary Industries Minister David Basham could reject the request if it gained council support tomorrow night.

“As long as the request is founded in that data-based evidence we believe we are putting forward such a strong argument that there is no other choice but for the minister to agree that the City of Onkaparinga maintains its GM-free designation,” Lynch said.

“Although it’s unfortunate that this could be potentially to the detriment of other regions, if we have the ability to remain a GM-free region that would absolutely elevate the profile of our sustainability and our environmental credentials internationally further.”

The decision followed the independent Anderson review that found the ban had caused an estimated $33 million to be lost on canola crops alone since 2004.

In Australia, only GM canola and cotton are approved for growth in Australia. However, there is potential for GM technology to be used in the future to develop other plant types including new grape varieties or other aspects such as yeasts used in winemaking.

While there are some concerns that hard to kill strains of GM canola or pasture cultivars could drift into vineyards creating superweeds, the main concerns are around the potential impact on the marketability of wines from GM-approved regions, particularly in several key European markets.

Gemtree Wines has about 120ha of organic and biodynamic certified vineyards and exports about 40 per cent of its wine, which is predominantly Shiraz.

Of its exports, managing director Mike Brown said 60 per cent went to the northern European countries of Finland, Sweden, Norway, the Netherlands and Denmark.

“We have to sign an agreement with them each year that every product we sell to them is GMO-free so they were very concerned that situation was possibly going to change with McLaren Vale,” he said.

“Now more so than ever people are focused on the ability to trace the quality of the product and being able to attach it to a global environmental initiative.

“We have worked so hard as a region to build our reputation as clean, green and sustainable so this is one of those moratoriums that is absolutely crucial for the now and the future of our region.” 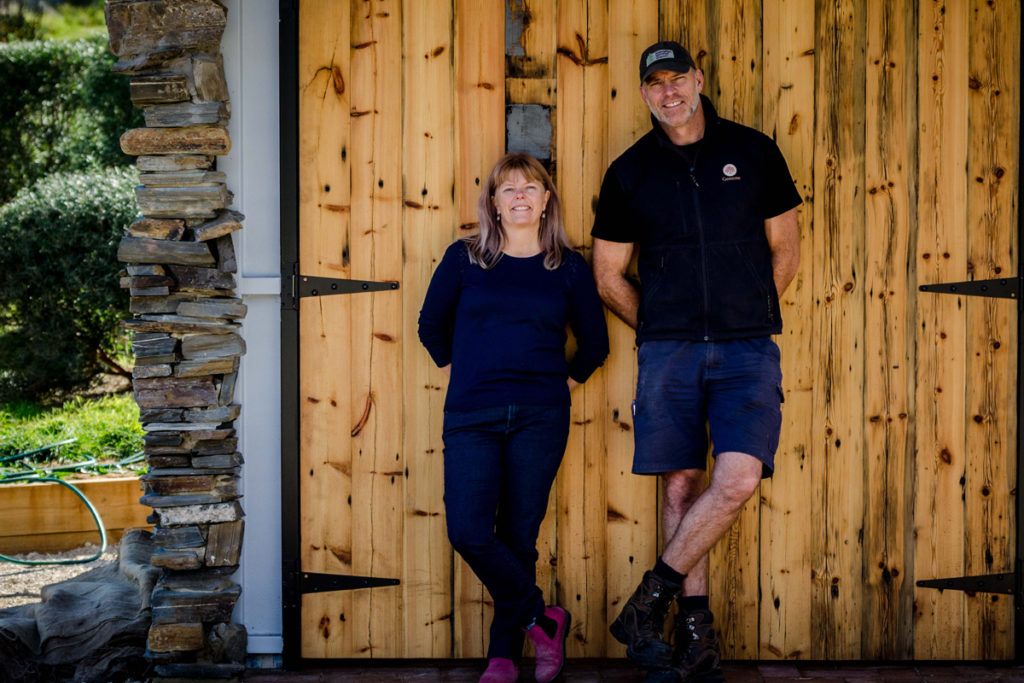 Husband and wife team Melissa and Mike Brown have made Germtree Wines one of the most respected organic producers in McLaren Vale.

Brown said there was potentially $1.7 million in export revenue for the Gemtree brand.

He said he had a letter signed by his international importers saying, ‘we support you to remain GM free’.

Like Gemtree, high profile McLaren Vale wine d’Arenberg was among dozens of stakeholders who lodged a submission during the consultation process.

It included excerpts of communications with suppliers in Belgium, Russia and Finland saying a change in status to allow GM crops in McLaren Vale would effectively rule it out of export contracts.

Onkaparinga Council received 314 survey responses and 46 submissions through its consultation period, including a good representation from primary producers and food manufacturers.

It then invited Grain Producers SA, the National Association for Sustainable Agriculture Australia and McLaren Vale Wine Grape Tourism Association to present at a workshop on August 25.

Councillors then asked for a draft application to be put up for consideration at the September 15 meeting.

Onkaparinga Mayor Erin Thompson said the council’s role was to take an impartial position while collecting community views, with a focus on evidence of financial impacts either way, before elected members decided if they would seek non-GM crop designation.

“Our wine growers and producers have provided us with evidence that suggests designating the City of Onkaparinga as GM-free would mitigate the risk of our region losing millions of dollars each year in export value,” she said.

“Council will be considering this carefully, along with the other evidence provided, as we understand our community’s passion for – and the international appeal of – our area’s clean and green reputation.”

Other councils that cover major wine regions including Barossa and Adelaide Hills are believed to be considering a GM-free application while councils around the wine regions of Clare, Padthaway, Mt Benson and Wrattonbully have ruled it out.

Unlike many other regions, McLaren Vale is contained in one council area, has a high proportion of organic or biodynamic producers and does not have much grain grown in the area.

Light Regional Council, which includes the north-west corner of the Barossa around the town of Greenock, last week voted to support the government lifting of the moratorium.

This will potentially complicate potential GM-free bids by the Barossa or Gawler councils, which also cover the famous wine region.

“It’s not ideal but we’re always governed by lines on a map,” he said.

“There’s some transference of seed into vineyards and that’s going to be of concern if one council out of three was to allow the ban to be lifted so it’s problematic but we’ve also got to recognise that there are peculiarities already around the place.

“For example, tourism region boundaries don’t sit neatly within a wine boundary so you get various different outcomes that are not ideal for our industry but it is just a quirk of how the state is divided up.”

Smedley said he had been approached by a number of wine regions about the issue.

He said the association did not support the lifting of the statewide moratorium but accepted that the industry did not have any potential GM projects in the works at the time.

“Having said that, now the ban has been lifted it provides a whole range of opportunities for researchers to get funding to look into these things,” Smedley said.

“The bigger question here is what implications does it have in terms of our marketing opportunities, particularly from a clean and green image and whether that’s of interest to the markets we export to.”

He said the Anderson study showed very little impact on the wine industry or organic industry.

“We think all industries had ample opportunities to go through the public discussion before the state ban was lifted,” McCabe said.

“We think we can completely co-exist with the organics industry and the wine industry as it does in every other mainland state in Australia.”

McCabe said the lifting of the GM moratorium was an opportunity to reboot research at SARDI and the Waite Institute to take on the challenges specific to South Australia.

“Our whole credibility in research and adapting canola to the new climate is at stake,” he said.

“We see it as a stepping stone to a reduction in chemicals and environmental change and that would be great for the wheat and barley industry as well.”

An Onkaparinga yes vote tomorrow night will put Basham under pressure for one of the first times since he replaced Tim Whetstone as Primary Industries Minister last month.

Whetstone, who resigned during July’s country members’ allowance scandal, had been a strong advocate for removing South Australia’s GMO moratorium and it is believed Basham has similar views on the issue.

Will the stock market recovery be a W-shaped double dipper?

Basham said the lifting of the statewide moratorium in time for the 2021 growing season had been a “significant win for grain growers across South Australia”.

He said the Anderson review found “so-called price premiums for being GM-free were a myth”.

“Lifting the moratorium on mainland SA brings our farmers on a level playing field with their interstate counterparts who have had access to GM technology for at least a decade,” Basham said.

“Councils now have a once-off six-month ability to apply to be GM-free but they have to consult with their local community and demonstrate an economic benefit.

“These applications will be due by 30 September to ensure they can be considered by the GM Crop Advisory Committee as required by law before the State Government makes the final decision.”