The university says enrolments are up across every faculty, citing “better than expected” offshore enrolments for students wanting to study remotely as the main contributing factor.

But the university told InDaily the impacts of COVID-19 travel restrictions have led to a sharp decline in the number of new international students commencing studies in semester 2.

This year’s semester 2 international student enrolments are down 26 per cent, with only 543 new students starting in the second half of this year compared to the same time last year.

The decline in enrolments has led to a seven per cent drop in total international student revenue, with $254 million expected to be made from those that have enrolled.

Overall, enrolments are also down compared with the university’s 2020 budget targets.

“The university is expecting this to impact on the pipeline of commencing international students for 2021, and again in 2022, which will have further impacts on the University’s revenue for each of those years,” a spokesperson for the university said.

“It is for this reason the University is taking steps to reduce expenditure, including through varying staff conditions, and position the University to withstand future downturns and emerge with strong finances.”

However, in an email to staff this morning, acting Vice-Chancellor Mike Brooks wrote that the domestic and offshore enrolment figures for semester 2 meant that the university’s “challenging” financial position had improved.

“You will recall that it was predicted the university would be $100m short of budget in 2020 and that this would be dealt with by $65m of savings across faculties and divisions (already in hand) and $35m of borrowings,” Brooks wrote.

“It now appears that we will recoup approximately $40m this year and that borrowing may no longer be necessary in 2020.”

Brooks wrote that the enrolment data had prompted the university to cancel or defer several cost-cutting measures proposed earlier in the year and agreed to by the majority of staff last month.

But he said the university would “continue to pursue a 200 FTE reduction in staffing through turnover and voluntary measures”.

A 3.5 per cent staff pay cut has been put on hold, with the university to review whether the measure still needs to be applied in February.

Staff will also be able to retain annual leave loading, while a decision to cancel a previously-scheduled 1.5 per cent salary increase from March 2021 will also be reviewed in February.

“I appreciate that these revisions, occurring only three weeks since staff voted on these measures, may be surprising,” Brooks wrote.

“It is obviously pleasing that our situation has improved and that we can make these changes.

“This situation also reflects the volatile nature of our circumstances and the difficulty of predicting international student enrolment patterns in the time of COVID-19.”

But Brooks said despite the “positive news”, he still held “real concern” about the university’s financial position beyond this year.

“It is a common sentiment across Australian universities – and particularly the research intensive universities – that this year has held up better than expected, that the greatest financial challenges are likely to be faced in the next two years, and that international enrolments may only return to former heights four or five years hence, if at all,” he wrote.

“This is the likely scenario for the University of Adelaide.”

He wrote that the decline in the number of new international student enrolments for semester 2 this year would have “pipeline consequences for several years”, with the potential for travel restrictions to remain in place “for a significant period of next year”.

“Modelling of that scenario indicates tough times ahead.

“Assuming travel is still restricted in 2021 our current estimate of international student revenue for 2021 indicates a decline of 23 per cent, in the order of $55-60M, compared with this year.

Brooks said that the university would “likely need to adapt to a reduced budget outlook for several years”. 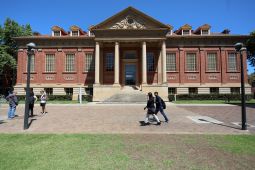 He said the university would not force staff redundancies, but it had not ruled out borrowing “to see through a trough in revenue”.

“Our financial challenges are significant but manageable,” he wrote.

“I remain genuinely optimistic about our University’s future and confident we will emerge well-poised to thrive over the coming years.”