Lander ends his term as South Australia’s first Independent Commissioner Against Corruption today, aware that he leaves office having made institutional – if not personal – enemies in politics, law and various public offices, including the Police Association.

“I think a few people are waiting for me to go,” he notes.

But while MPs privately – and sometimes publicly – argue that his office has over-stretched its ambit in investigating cases of misconduct and maladministration, as well as criminal corruption, Lander says many of them have been his most regular informants.

“We get both complaints and reports – the complaints are from members of the public, the reports are from public officers [and] the quality of reports is much higher than complaints,” he says.

And those reports have come from sitting parliamentarians?

In recent months, his tenure winding down, he has become more selective about the cases his office pursues.

“I think we’re doing fewer investigations, but which are more important,” he says – either “the nature of the offending or the person doing the offending”.

But critics are quick to point to ICAC’s record, which has included significant cases that have petered out in court.

A drawn-out case against former Transport official Michael King resulted in a $5000 fine, while charges against others caught up in the matter were withdrawn, in what one of the accused’s counsel described as “an absolute mockery of the justice system”.

Lander says his relationship with the police union was already tenuous, after PASA rejected his recommendations for an overhaul of the police complaints process.

“We haven’t got on all that well since,” he reflects.

But he maintains that all those cases warranted his attention.

Asked if he has regrets, he says only: “Perhaps some of the investigations could have been done more quickly… I don’t think there’s anything I regret not investigating.”

Or anything he does regret investigating?

“Some things have turned out not to be corruption, but that’s the purpose of the investigation to determine.

“I do think there’s… a pressure on this office and any law enforcement office to carry out their investigation quickly – ICAC’s activities do have a significant effect on people who have not engaged in the conduct under investigation.”

Asked if he is referring to the high-profile case against Renewal SA executives John Hanlon and Georgina Vasilevski – who were stood down in September 2018 but not charged until early this year, the latter accused of misusing just $1032 – he replies: “No, there was no delay in that… that was one of the better ones.”

“The investigation did uncover further conduct which was said to have occurred in Europe [and] I sent my investigators to Europe, which did delay it somewhat, and that resulted in further charges [against Hanlon],” he says.

“That did delay it somewhat, but I don’t think we were slow in the Renewal SA case… we obtained the evidence necessary for a charge – after that it’s out of our hands.

“And that evidence was handed over nearly two years ago… within two to three months of that investigation starting – any delay after that is not of our making.”

Asked whether Vasilevski’s charge warranted such a delay, he says: “In my view, it should be dealt with summarily by the courts… but it hasn’t been dealt with that way.”

The Renewal SA matter also led to controversy for Attorney-General Vickie Chapman, who invoked ICAC in a public statement and was later investigated by police with the case referred to the DPP, which elected not to pursue it.

Lander did not venture an opinion on her conduct at the time, but says now: “At the time, I didn’t think she committed an offence.”

He says their relationship is “fine… we see each other once a month and it was a respectful relationship.” 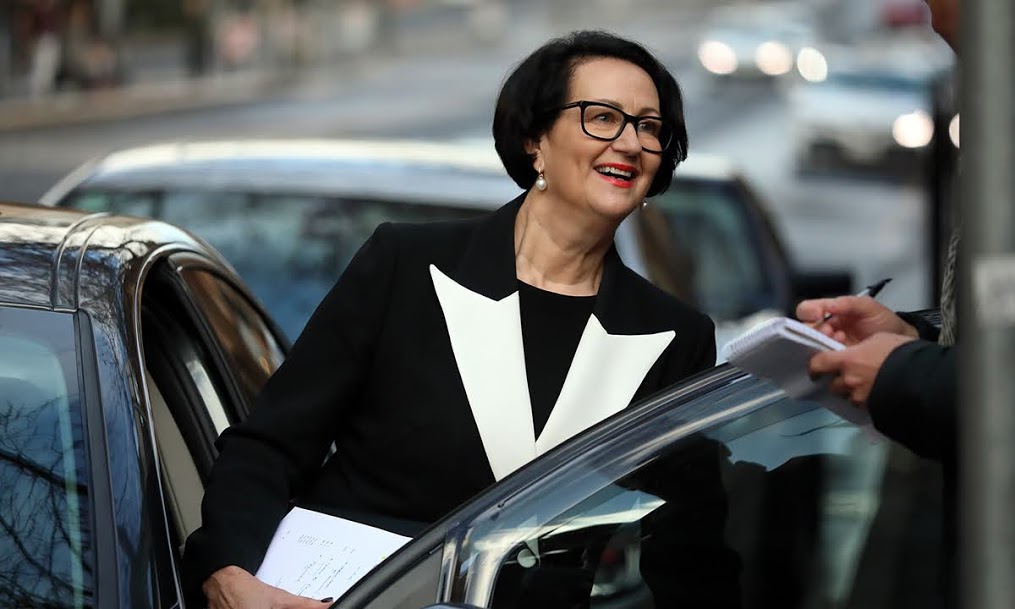 But Lander can see the writing on the wall with parliament expected to consider amending the ICAC Act to limit the office’s ability to investigated matters of maladministration and misconduct – which he ruefully notes, if passed, would see the Marshall Government shift from demanding open hearings in such cases to scrapping them altogether.

He rejects the notion that such inquiries are best left to the Ombudsman.

“I don’t share that view, because that’s not what the Act says – the act says I have the power to examine misconduct and maladministration.”

Nonetheless, some of those who have long espoused the contrary view are the same MPs that actually wrote the Act.

“So I can’t understand why they’d say I don’t have the power… I think they probably mean I shouldn’t exercise the power, rather than I don’t have it.

“They were concerned if I investigated matters, people would wrongly think I was investigating corruption rather than misconduct or maladministration – and I can understand that point… and that’s why I’ve suggested changing the name of the office.”

Lander believes a Public Integrity Commission would better reflect his role, and argues that some of his higher profile maladministration and misconduct cases have left a significant public legacy.

“I thought they were all useful investigations – they assisted in public administration more generally,” he says.

He says there’s now a move “to constrain me to corruption [but] I think it would be a very bad mistake, for a number of reasons”.

Lander leaves with his office, not unusually, shrouded in controversy. InDaily yesterday revealed that he has left an open brief for his successor, Ann Vanstone, including a criminal investigation into a number of state MPs.

Meanwhile, 11 ongoing cases have been left in limbo after District Court judge Leisl Chapman found ICAC had breached its own Act in referring the case against Troy Bell directly to the DPP – something Lander still insists he is allowed to do.

“It’s made it very difficult,” he says of the decision’s impact on his office.

“The matters that have already been referred to the DPP, if the judge were right, should not have been referred – and if she’s also right that we can’t assist the DPP, that would also present significant problems.

“I disagree with her finding about that – we were doing what SAPOL does every day of the week in a SAPOL prosecution, and that’s to respond to the DPP’s request to obtain further evidence.

“It’s unremarkable – but she said because we’re not a prosecuting authority, we can’t do that.

“With respect, I disagree with her.”

The decision is set to be considered by the Full Court after an application by DPP Martin Hinton was filed last week.

Nonetheless, Lander is not against some changes to the ICAC Act.

He considers its much-touted secrecy provisions to be “over-engineered… they try to do too much.”

“I think there are some things that should be able to be said publicly that presently can’t be,” he says, noting that “a proper reading of [the Act] would lead to the conclusion that the media can’t publish anything that’s said in the courts” – and that a court can only authorise them to do so in exceptional circumstances.

“Which is a bizarre result – and absolutely inconsistent with the public interest,” he says.

Lander believes his most significant achievement is merely that of “setting the office up”.

“That was a blank sheet if paper when we started,” he says.

“I think we’ve had a significant influence on integrity in public administration.”

That’s both through investigations and education, which he says has had “an influence on integrity” across the bureaucracy.

“I think that’s been the most significant achievement – a change perhaps in culture in public administration… I think the office is a significant deterrent to corruption.”

Lander intends to keep working, if not full time.

“Mediations, arbitrations… I’m not sure if I’ll get a practising certificate, I’ll think about that,” he muses.

But as the former federal court judge returns to the law, he raises a significant concern about the justice system more broadly.

“I do have concerns – there are significant problems with access to justice,” he says.

“We have to consider whether there should be changes to the adversarial system to give judges more inquisitorial powers… I think it would be better if the judge had more input into what was a relevant issue [as] often the issues that are sought to be decided are more expensive than they’re worth.”

Asked if he is suggesting the middle class is effectively denied access to justice, he says: “I think so.”

“You couldn’t afford a decent case,” he tells me.

“I’m sure I couldn’t either…

“I think we might have to consider going to a more inquisitorial system where the judge has more control over cases, [which] would be done more quickly and more cheaply.”

He pauses for a moment, and then considers aloud that initiating such a debate “wouldn’t be popular with the lawyers”.

Another to add to Lander’s long list of institutional opponents.

“Get in the line,” he chuckles.