Despite the compensation claim being lodged in late January this year and accepted by the university’s council on April 6, the university allowed Rathjen to continue in the position until he suddenly took leave on May 5.

Two days after he went on leave, the Independent Commissioner Against Corruption Bruce Lander confirmed he was investigating Rathjen following allegations of improper conduct.

In a statement issued this week following a three-month investigation, Lander said Rathjen committed “serious misconduct” after he touched two of his female staff members in a sexual manner at a university function in April last year and later lied about his “egregious” and “entirely inappropriate” behaviour.

According to Lander, in late January this year one of the victims – who said Rathjen hugged her, deliberately touched in a sexual manner and kissed on the mouth multiple times – requested compensation in relation to Rathjen’s conduct and the way in which the university handled her complaint.

Lander said the university’s convenors’ committee accepted the woman’s claim for monetary compensation on March 23 and the council adopted the recommendation on April 6.

Rathjen took indefinite leave of absence on May 5 before handing in his official resignation on July 20 – one day after giving evidence to the ICAC inquiry.

At the time he cited “ill health” for his departure.

The university, according to Lander, “invite(d) the Vice-Chancellor to stand down”.

Based on that figure, in the 15 weeks between the university’s council accepting the woman’s compensation claim and the date of Rathjen’s resignation, he would have been paid an estimated $300,000.

Between taking indefinite leave and resigning, Rathjen would have received about $200,000.

It is unclear whether Rathjen received his usual salary while on leave.

InDaily asked the university if Rathjen received a payout following his resignation, but is yet to receive a response.

Lander said the woman made “very serious allegations of victimisation” following her complaint in relation to Rathjen’s misconduct.

He said the university had “always maintained” that the woman had not been victimised, “although it accepted she might well have perceived she was victimised”.

He said the woman was initially offered a payout that was “significantly less than that to which she claimed”, but the university’s senior executive review committee “at that stage did not see the Vice-Chancellor’s conduct as having been as serious as they later determined”.

“On March 16 2020 Ms A’s (the victim’s) lawyers wrote to the university renewing her claims and providing further information in relation for the basis upon which the claims were made,” Lander wrote.

“Essentially the claims relied on the Vice-Chancellor’s conduct on 11 April 2019, the manner in which the university had dealt with her complaint in April/May 2019, and that she had been victimised between that time and January 2020.”

Lander said on April 6, the university’s council accepted the woman’s claim on the terms requested by her lawyer.

InDaily asked the university to reveal the sum of the payout, but a spokesperson declined, citing confidentiality.

While Rathjen was found to have engaged in serious misconduct, Lander said none of the university’s public officers including the then or current Chancellor engaged in misconduct or maladministration as defined in the ICAC Act.

Following questions from InDaily, a spokesperson for the university said its council, which is  responsible for employing the Vice-Chancellor, was not informed of Rathjen’s behaviour until April 6 this year – almost a year after the misconduct took place.

“Once the proper governance bodies were engaged in early 2020, we took appropriate action – the incident and the university’s initial handling of it throughout 2019 were reported by the university to ICAC,” the spokesperson said.

Lander said the university delayed informing its council of Rathjen’s conduct after receiving advice from a private solicitor that only the then Chancellor Kevin Scarce needed to handle the complaint.

Lander refuted that advice, but he said Scarce acted appropriately at the time given the legal counsel he received and the wishes of the two women not to be identified.

InDaily asked the university why Rathjen remained employed while the claim was being processed and later accepted.

InDaily also asked why the university accepted Rathjen’s resignation rather than dismissing him in light of the decision to pay out the compensation claim.

A university spokesperson said Scarce “made a decision to manage the matter in 2019”.

“Acting on advice from an external lawyer,  he issued a warning letter and the employment of the Vice-Chancellor was maintained,” the spokesperson said.

“The former Chancellor made that decision without referring the matter to the Council.

“The Council, as the employer, was not able to undertake an investigation one year later when it became aware of the issue and was unable to take any further investigative response when the matter was referred to ICAC because ICAC asked the University not to do so.”

According to Lander, in August last year Rathjen was informed that he was being investigated for historical claims of sexual harassment or abuse toward a female postgraduate student while he was an academic at the University of Melbourne.

Lander said Rathjen wrote to Scarce advising him that there was “nothing that the Chancellor needed to know in relation to his past conduct”, a statement the commissioner said was “plainly untrue”.

“I have specifically found that the lawyer did not give any advice to the Vice-Chancellor in respect to the question that had been posed of him by the Chancellor,” Lander said.

“I have found that the Vice-Chancellor lied to the Chancellor because he knew, if he told the Chancellor the truth, that he was subject to investigation in relation to a previous claim of sexual misconduct it would jeopardise his tenure at the University of Adelaide.”

But Lander noted that “some time later in 2019” the Chancellor, Deputy Chancellor and “at least one member of the council” were informed that there were “rumours circulating that the Vice-Chancellor had engaged in sexual conduct or sexual relations with a woman in circumstances which might impact upon his position as Vice-Chancellor”.

“The Chancellor was asked to inquire of the Vice-Chancellor whether the rumours were true, which he did,” Lander said.

“The Vice-Chancellor replied in words to the effect that there was no truth in the rumours.”

The University of Adelaide told InDaily it was not aware of the allegations of sexual harassment at Melbourne University when it appointed Rathjen in January 2018. 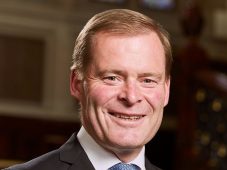 “The university engaged in an extensive due diligence process prior to his appointment,” a spokesperson said.

“This is the only incident we’re aware of in relation to Professor Rathjen.

“However, his conduct was unacceptable and one incident involving our most senior leader is too many.”

“The university has said wide publication would discourage other persons in the future from reporting claims of sexual harassment or misconduct,” Lander wrote.

“It may be because of the brevity of this statement compared with the report, that the seriousness of the conduct will not be understood.”