It follows an overhaul of the state’s landscape legislation to ensure local communities are held directly responsible for managing their region’s soil, water, pest plants and animals, and biodiversity.

According to the Landscape South Australia website, the new regional landscape groups, which replace the former Natural Resource Management (NRM) boards, are tasked with deciding how government funding should be spent to manage natural resources in their areas.

The boards, which are comprised of eight members appointed by Environment Minister David Speirs, are also charged with developing “stronger partnerships” with Aboriginal communities to “ensure that the knowledge of our regional communities and First Nations in respected, recognised and used in the management of our landscapes”.

But only one of the new boards – metropolitan-based “Green Adelaide” – has an Aboriginal representative, Kaurna elder Jeffrey Newchurch.

The Alinytjara Wilurara board, which covers much of the Anangu Pitjantjara Yankunytjatjara Lands in the state’s far-north, has retained its all-Aboriginal membership from the previous landscape management system. 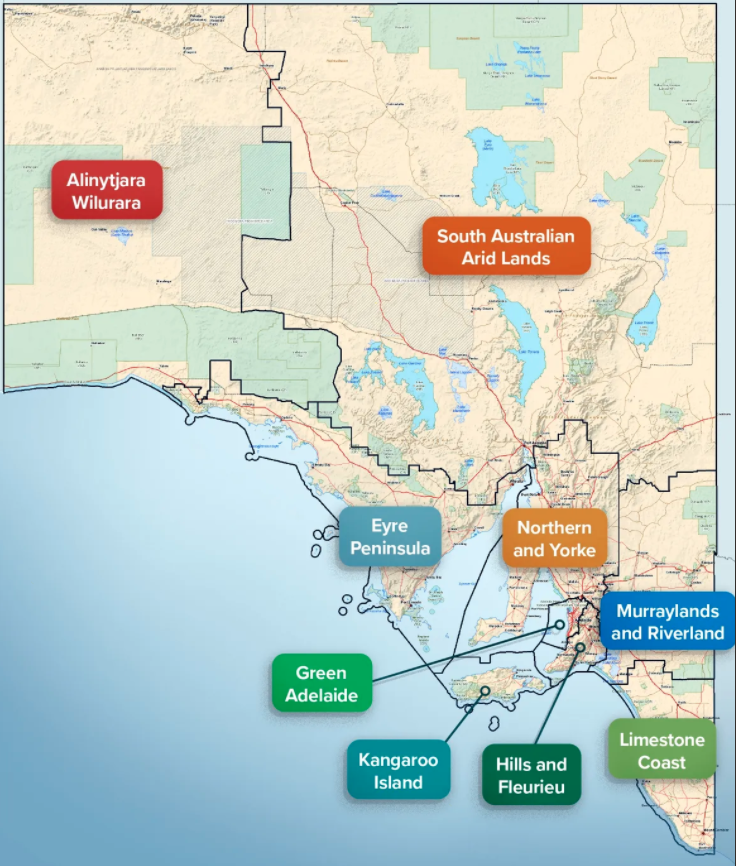 Thomas said under the previous NRM structure there was a “sprinkling of Aboriginal representation”, with at least three of the former boards featuring an Aboriginal member.

He said despite Aboriginal people being given the opportunity to put their hand up to sit on the new boards, the Environment Minister selected only one representative to sit on Green Adelaide.

A State Government spokesperson said Speirs sent letters to six Aboriginal groups asking for nominations to sit on the landscape boards, but the call was not answered.

“I think the new Landscapes Act promised so much – it was very inclusive for Aboriginal people within the Act and it’s the first time we’ve seen something like that – so it’s disappointing there wasn’t a wider representation of Aboriginal people across the boards,” Thomas said.

“If you look at it through Aboriginal eyes there’s different sites and stories that go with the land – it brings it alive and it’s not just a station or a vineyard or whatever else.

“There’s a strong connection between the land and the spiritual world and so it’s important Aboriginal people get their say… especially if they’re looking at new developments that could risk destroying sacred sites or places of dreaming.”

Thomas said he had met with Speirs to discuss how the Government could better engage with Aboriginal groups in the future.

“There is opportunity there and they’re all new boards, so I think it’s essential for them to get off on the right foot to engage with Aboriginal groups,” he said.

“Time will tell if it’s just more lip-service to what the Act has offered.”

“Each of the new decentralised landscape boards are expected to have strong community engagement, building collaborative, respectful and enduring relationships with pastoralists, mining companies and traditional owners to deliver effective natural resources management,” he said.

A report published by the Government in 2018 following public consultation about its planned legislation changes stated Aboriginal engagement was a “priority” on landscape management boards.

“This should not be in an advisory capacity, where (Aboriginal community) advice may be ignored by the board, but as equal decision makers with the board,” the report stated.

“Having at least two Aboriginal representatives on the Eyre Peninsula Board was suggested, considering the large number of Aboriginal nations in the region.

“Participants at the Gawler community forum also noted a desire to see strong representation of local Aboriginal people on the landscape boards.”

Opposition Aboriginal Affairs spokesperson Kyam Maher said Aboriginal people from across the state had expressed concern about the lack of Indigenous representation on the boards.

“This is a matter that we raised in Parliament when the legislation was being changed (because) we wanted to make sure that Aboriginal people were at the forefront of caring for country,” he said.

“We are very disappointed that this is now not the case.

“We would look to raise this with the Government to ensure Aboriginal people are heavily involved with any decision-making that goes on in relation to caring for country.”