China has announced an anti-dumping investigation into Australian wine, a move which could potentially prove a savage blow to the state’s massive wine industry.

China’s Ministry of Commerce said this morning it had begun an anti-dumping investigation into imports of wine from Australia following a request from the China Alcoholic Drinks Association on behalf of the domestic industry last month.

According to news agency Reuters, the anti-dumping probe will look at imports of wine from Australia in containers holding two litres or less in 2019, the ministry said in a statement on its website, adding that it would also investigate any damage done to the Chinese wine industry from 2015-19.

Australia’s largest wine company, Treasury Wine Estates announced to the Australian Stock Exchange this morning it would co-operate with any requests for information from Chinese or Australian authorities during the probe.

Staff and security officers working in South Australia’s COVID-19 quarantine hotels will be tested for the virus after two cases in people returning from overseas in the past two days.

A woman aged in her 30s who returned to South Australia on a repatriation flight from India on August 4, yesterday became the latest person in the state to test positive for coronavirus on day 12 of her 14-day isolation period.

Her partner has also tested positive, although their two children remain free of the infection.

The past three SA cases – all in the past four days – have been travellers returning on repatriation flights from India at the start of the month. They are the only cases reported in the state since August 7.

There were no new cases reported in SA today.

SA deputy chief public health officer Dr Michael Cusack said the woman, who is currently quarantining in a medi-hotel with her family, returned a negative test on day 1 of quarantine but tested positive on day 12.

The woman has mild symptoms and has lost her sense of taste. The new case brings the state’s total to 462 with seven currently active.

Cusack said because of the two positives in quick succession, officials had decided to proactively test people working in the quarantine hotels.

He said while authorities did not expect anyone to be found to be infected, the tests would add an “extra layer of certainty”. 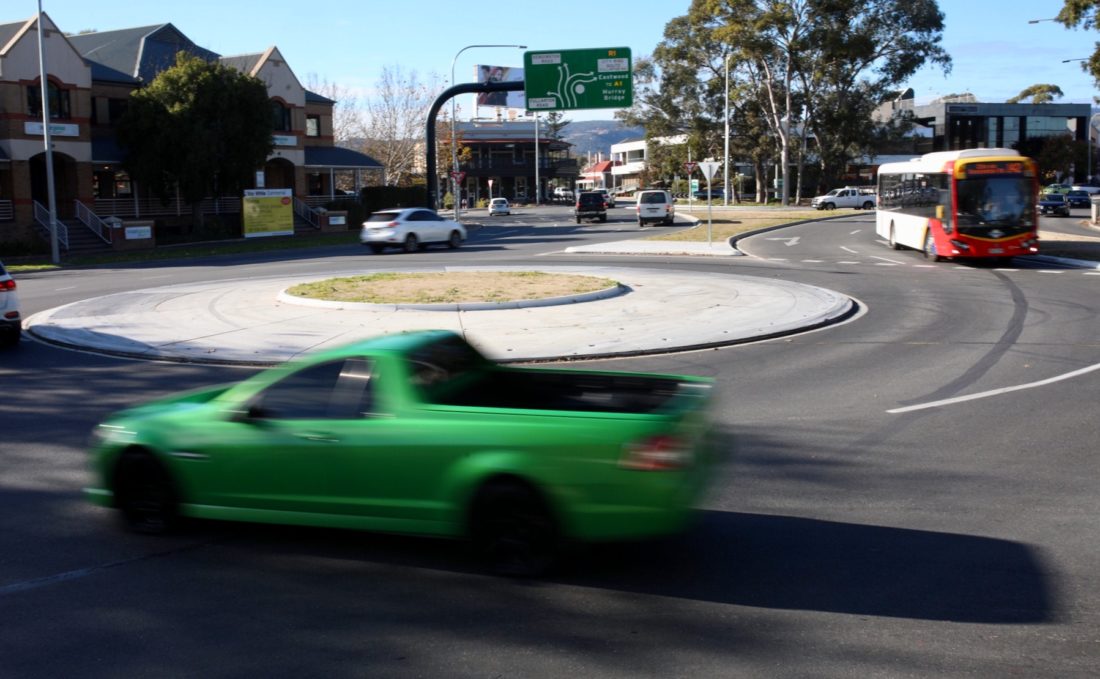 The Britannia roundabouts on the eastern edge of Adelaide’s city parklands are still South Australia’s worst site for casualty collisions, according to new data released by the RAA.

There were 52 crashes where people suffered serious or minor injuries at the notorious roundabouts in the past five years, state government data obtained by RAA Insurance shows.

The majority (46) occurred at the larger of the two roundabouts, which were created in 2013 in an effort to improve safety.

The next worst was the junction of Marion and Sturt roads at Marion, which recorded 39 casualty crashes between 2015 and 2019.

Seven of the remaining eight intersections in the top 10 were in the northern suburbs.

The most common type of crash at the 10 intersections were rear-end collisions (40 per cent), followed by right angle (28 per cent) and right turn (26 per cent) collisions.

“We are urging motorists to be vigilant whenever they are behind the wheel,’’ she said.

Australia’s coronavirus death toll has risen to 438, with another 17 fatalities in Victoria reported this morning.

The figure, which takes the state’s death toll to 351, is down on yesterday’s record of 25 deaths.

There were also 222 new cases, continuing the lower trend as the Victorian outbreak comes off its peak.

There have been no 400-plus days for new cases in Victoria since last Wednesday.

Of Monday’s record deaths, 22 were linked to aged care.

Authorities have warned of ongoing fatalities even as new case numbers decline, amid a stage-four lockdown for metropolitan Melbourne and stage-three restrictions for regional areas.

A breakdown of ICU hospitalisation data released on Monday afternoon shows 31 of 49 patients are aged 60 or over.

Meanwhile, New Zealand has reported 13 new confirmed cases of coronavirus for the last 24 hours compared with nine a day earlier as it battles to contain an outbreak in Auckland.

Twelve cases are linked to the existing virus cluster in Auckland, which remains in lockdown due to a flare-up in infections there.

New Zealand has recorded just under 1300 confirmed cases and 22 deaths.

Supermarket giant Coles has lifted full-year profit by 5.7 per cent, buoyed by consumer stockpiling before the COVID-19 lockdown across the country.

Net profit excluding significant and other items was $951 million for 2019/20, compared to $900 million the year before.

Its statutory result was $978 million, down 31.8 per cent from $1.44 billion, although this included the impact of now discontinued businesses.

“Trading increased significantly in the latter stages of the third quarter as customers began pantry stocking in advance of COVID-19 social distancing measures being introduced,” Coles said in a statement to the ASX this morning.

“The associated transition to in-home consumption supported elevated trade through to the end of the year.”

Coles online sales revenue grew by 18.1 per cent to $1.3 billion for the year.

It will pay a final dividend of 27.5 cents, taking the total for the year to 57.5 cents per share.

The boat was intercepted near Newcastle under a joint operation by Australian Federal Police, NSW Police and Australian Border Force officers after an international partner raised concerns about the suspicious off-shore activity.

The three men, reportedly two Australians and a Chinese citizen, appeared in Sydney’s Central Local Court on Monday and were refused bail.

The vessel, believed to be a fishing trawler, was being taken to Balmain in Sydney’s inner west where it will be examined and the drugs unloaded.

Further details are expected to be released later today. 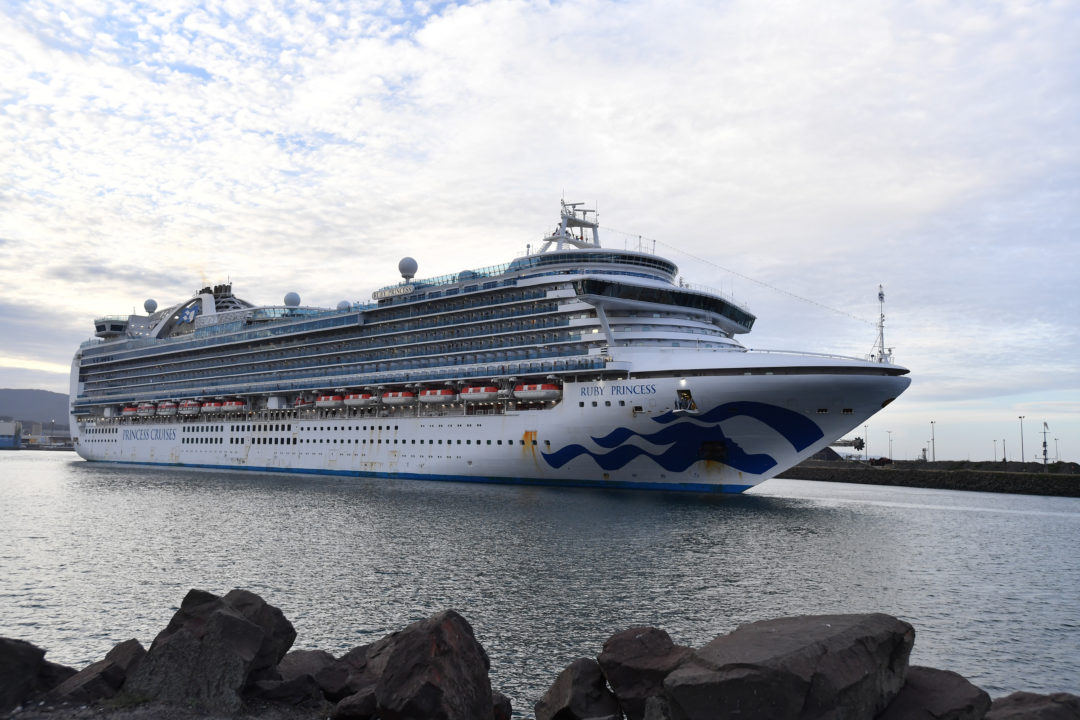 The cruise ship has been linked to more than 20 coronavirus deaths and hundreds of cases, with a NSW inquiry into its Sydney disembarkment in March laying most of the blame on state health authorities.

ABF was absolved of playing any part in the debacle, but federal Labor’s home affairs spokeswoman Kristina Keneally wants more answers from officials when they front a Senate inquiry today.

“Federal agriculture officials will need to explain why their department failed to follow its own protocols and procedures in handling the arrival of the Ruby Princess,” she said.

NSW Premier Gladys Berejiklian has apologised over the cruise ship saga and has promised to implement all recommendations from the inquiry, released on Friday.

Australia yesterday marked its deadliest day of coronavirus with 25 deaths recorded in Victoria.

Twenty-two of Monday’s deaths were linked to aged care outbreaks.

The impact of coronavirus on people with a disability and the federal government’s pandemic response will be examined across a four-day royal commission hearing from today.

Almost 40 people, including those with a disability, their families, advocates and experts, will give evidence.

The hearing will focus specifically on the federal government’s COVID-19 response, with states and territories to be examined at a later date.

It comes after the royal commission into aged care heard damning evidence last week about Canberra’s lack of planning in the sector and conflicting messages from various levels.

The disability royal commission in March released a statement of concern which called on federal and state governments to protect and support people with disability during the pandemic.

The hearing is expected to hear of peoples’ struggles during isolation and their troubles accessing basic supplies, as well as evidence about poor communication from authorities.

Deputy Chief Medical Officer Dr Nick Coatsworth is among government officials who will front the commission later in the week.

The British government has bowed to public pressure over its school exam marking system, ditching an algorithm that downgraded the results awarded to students in England after their tests were cancelled due to COVID-19.

The government had faced days of criticism after the mathematical model used to assess grade predictions made by teachers lowered those marks for almost 40 per cent of students taking their main school-leaving exams.

Students will now be awarded the grade that their teachers had predicted for them based on past performance, Prime Minister Boris Johnson’s government said on Monday.

“I am sorry for the distress this has caused young people and their parents but hope this announcement will now provide the certainty and reassurance they deserve,” Education Secretary Gavin Williamson said.

Temperatures in California’s Death Valley skyrocketed to a blistering 54.4 degrees Celsius on Sunday – possibly the highest mercury reading on Earth since 1913.

If the National Weather Service’s recording is correct, it would also be among the highest three temperatures to have ever been measured at the site, a desert valley in the northern Mojave Desert, as well as the highest temperature ever seen there during the month of August.

The temperature in Death Valley hit 54.4 degrees at 3.41pm local time on Sunday, the National Weather Service said in a tweet.

Death Valley holds the record for the highest temperature ever recorded on the planet: 56.66 degrees Celsius (134 degrees Fahrenheit) in 1913, according to Guinness World Records. That reading has been disputed, however.

The reading comes amid an epic heat wave that continues to grip most of the southwestern US.

Per the climate data in xmACIS2, this is the first time since 1913 that Death Valley has reached 130F. In July 2013, it last reached 129F. If valid, it would be the hottest August temperature at the site by 3F. @NWSVegas pic.twitter.com/gZNBW4NXI4

Meanwhile, the temperature reached 41.1 degrees Celsius in the Japanese central city of Hamamatsu on Monday, tying with the nation’s highest temperature recorded in 2018.

The record was posted one day after the city saw the temperature soar to 40.9 degrees, according to the Japan Meteorological Agency. It is the first time that the mercury exceeded 40 degrees for consecutive days, the agency said.

The temperature last hit 41.1 degrees Celsius in July 2018 in the city of Kumagaya, north of Tokyo.

Australia’s highest temperature reading was 50.7C recorded at Oodnadatta in SA on January 2, 1960.

A severe weather warning is in place for large parts of South Australia, stretching from the Western Australian border to the state’s southeast.

The Bureau of Meteorology says a vigorous cold front associated with a complex low-pressure system will bring strong winds and rain from late on Tuesday through to Wednesday morning.

The worst of the weather is expected to hit Adelaide between 9pm and 3am.

“Damaging wind gusts in excess of 90 km/h are likely with squally showers and thunderstorms for a period ahead of and following the front as it moves across the warning area,” the bureau said.

The threat of severe winds will move eastwards and ease on Wednesday morning.

The bureau has forecast up to 25 mm of rain in Adelaide over the next two days with showers to persist into next week.