A woman aged in her 30s who returned to South Australia on a repatriation flight from India on August 4 has tested positive for COVID-19.

SA deputy chief public health officer Dr Michael Cusack said the woman, who is currently quarantining in a medi-hotel with her partner and two children, was in close contact with a man who was on the same flight and tested positive on Sunday.

He said the woman returned a negative test on day 1 of quarantine but tested positive on day 12.

She has mild symptoms and has lost her sense of taste.

The new case brings the state’s total to 462 with eight currently active.

“There’s no reason to suggest that any of the tests that we’re going to do in terms of this program are going to generate a positive result and they’re purely a precaution which we’re taking at this point in time,” he said.

“It just adds another layer of certainty to our processes.”

Bendigo and Adelaide Bank has halved its profits and deferred a decision on its final dividend.

Managing Director and CEO Marnie Baker said the bank’s priority this year was to support those impacted by COVID-19, bushfires, floods and prolonged drought through a range measures “to feed into prosperity, not off it”.

“Whilst the events of 2020 haven’t changed our strategy, the ongoing economic uncertainty has accelerated our need to transform.

“Our full year result has been impacted by COVID-19, record low interest rates and investment costs required to support the delivery of our strategy.”

Victoria has reported a record 25 further coronavirus deaths, taking the state’s toll to 334 and the national figure to 421.

There were 282 new cases as the Victorian outbreak continues to show signs of easing.

Premier Daniel Andrews says details should be released early this week to answer some fundamental questions in relation to health staff.

On the latest figures, 1164 are dealing with the virus.

“We know how health workers are positive but where did they get it from?” Andrews said.

He said the analysis should also provide some breakdown on which workers were most at risk and why.

Andrews said while he could not guarantee there would no more outbreaks across other sites, the situation had improved.

Of 10,806 tests conducted in the 24-hours until 8pm on Sunday, one of the positives was that of a returned overseas traveller and the other six were acquired locally.

NSW will also introduce new rules for schools from Wednesday.

Under the new guidelines, anyone with COVID-19 symptoms is prohibited from returning to school until a negative test result has been reported.

Formals, dances, graduation ceremonies, choirs and all social events have been banned and students must remain within their relevant class or year groups.

Schools must not travel outside their local community or zone and interschool sport and zone carnivals are restricted to 100 people per venue and held locally.

Spectators, including parents and carers, won’t be allowed on school grounds or at sporting events held during school hours.

“No shortcut” for returning international students

The Marshall Government has come under fire for allowing up to 300 international students to bypass strict border controls and travel to Adelaide to resume their studies, but the federal trade minister insists those arriving from overseas will be granted “no shortcut” into the state.

The federal and state governments over the weekend announced South Australia would be the first place in the country to welcome back foreign students as a test run for a broader return nationally.

International students, who collectively inject more than $1.9 billion into SA’s economy each year, have been locked out of the state since March due to coronavirus-prompted border closures.

The school at the centre of South Australia’s most recent COVID-19 cluster will re-open today.

Five COVID-19 cases were linked to Thebarton Senior College in early August, forcing the school’s closure and all students and staff into self-isolation or hotel quarantine.

The last of more than 1400 people linked to the Thebarton cluster walked free on Saturday after completing 14 days of isolation.

There was one new South Australian case of coronavirus reported yesterday in a returned traveller. The man returned from India on a repatriation flight on August 4 and returned a positive test on day 12 of his quarantine.

The infection takes the number of confirmed cases in SA to 461 with seven still active. 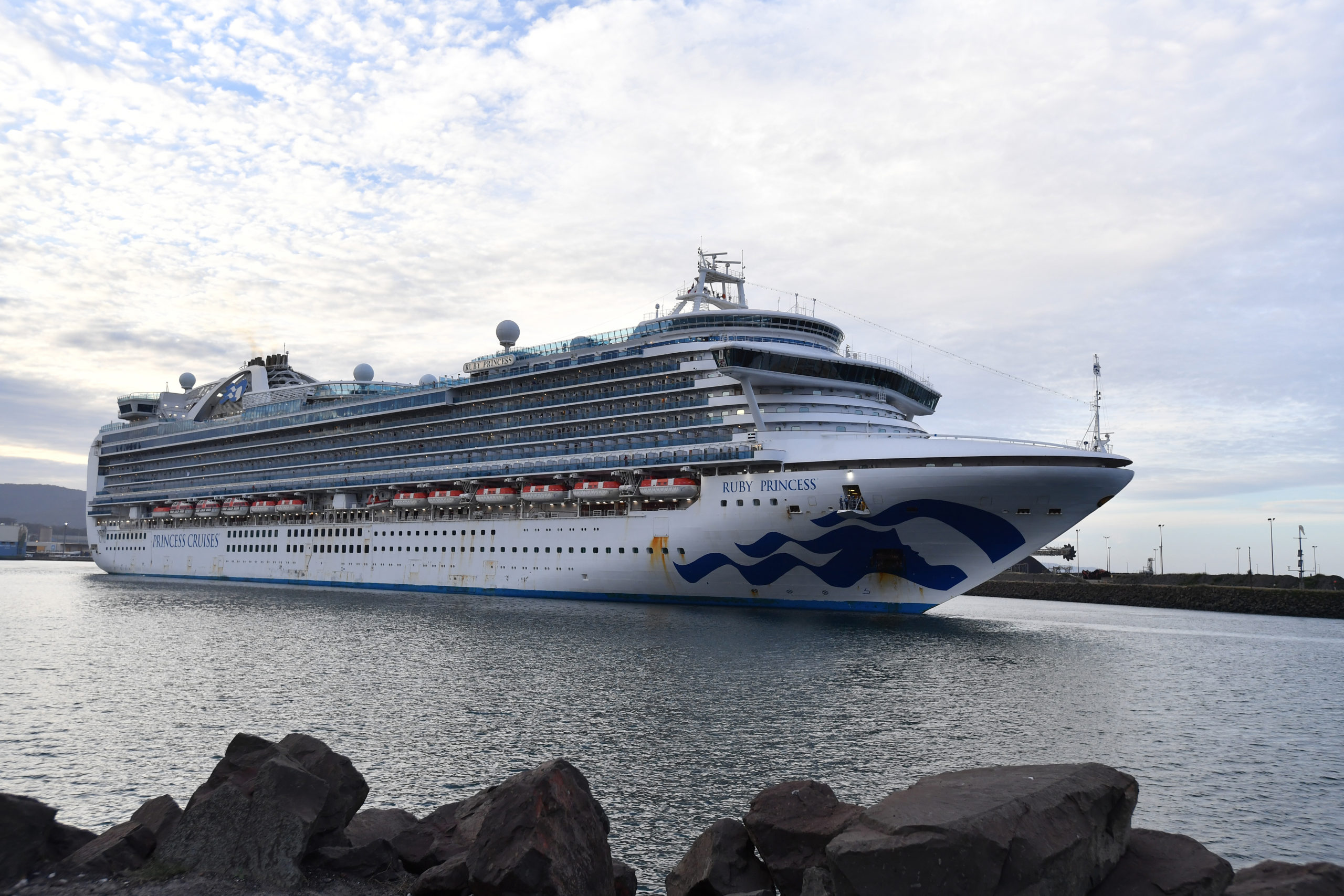 Gladys Berejiklian has publicly apologised for the “horrible mistakes” made during the Ruby Princess cruise ship fiasco in March, which led to the spread of COVID-19 across Australia.

The NSW premier read the inquiry report findings over the weekend after it was released to the public on Friday.

“I want to apologise unreservedly to anybody who is continuing to suffer or has suffered unimaginable loss because of mistakes that were made within our health agencies,” she said today.

“Those circumstances should and never will happen again in NSW.

“We have learnt so much since those horrible mistakes.”

The premier extended her apology in particular to the 62 people who weren’t on the ship but became infected with COVID-19 as a consequence of the errors made by health authorities.

The special commission of inquiry headed by Bret Walker SC identified a series of “inexcusable,” “inexplicable” and “unjustifiable” errors NSW authorities made before and after 2700 cruise ship passengers were allowed to disembark into Sydney’s Circular Quay in March.

In the report, Mr Walker reserved his harshest criticism for NSW Health, while relieving Australian Border Force officials of blame for the debacle.

The ship – which was low on medical supplies and swabs for COVID-19 tests due to shortages – left Sydney on March 8 for New Zealand and returned 11 days later.

Passengers were allowed to disembark before the results of 13 expedited tests, which showed at least three people had the virus, were received.

The inquiry revealed the Ruby Princess outbreak infected 663 passengers and led to 28 deaths, including 20 in Australia and eight in the United States.

Separate NSW Police and coronial inquiries into the Ruby Princess are ongoing and not expected to report back for at least another month.

South Australian oil and gas producer Beach Energy has reported a $461 million underlying net profit after tax for the 2020 financial year, down 18 per cent on last year’s result.

The $99 million fall in profit was driven an 11 per cent decrease in sales volume and a 14 per cent drop in sales revenue.

About two-thirds of the Adelaide-based company’s revenue comes from gas while 33 per cent is from oil.

Beach Energy managing director Matt Kay said it was a year in which the company’s robust financial position entering the COVID-19 pandemic had it well positioned to succeed in the lower oil price environment.

“Our net cash balance sheet position, high margin oil business, stable gas revenues and dedicated staff delivered a strong full year result despite the choppy waters that confronted us in the second half of FY20.

“Given our high margin, high returning business, Beach was in an enviable position at the end of the financial year in which we had no material write downs and were able to maintain our final dividend at 1 cent.” 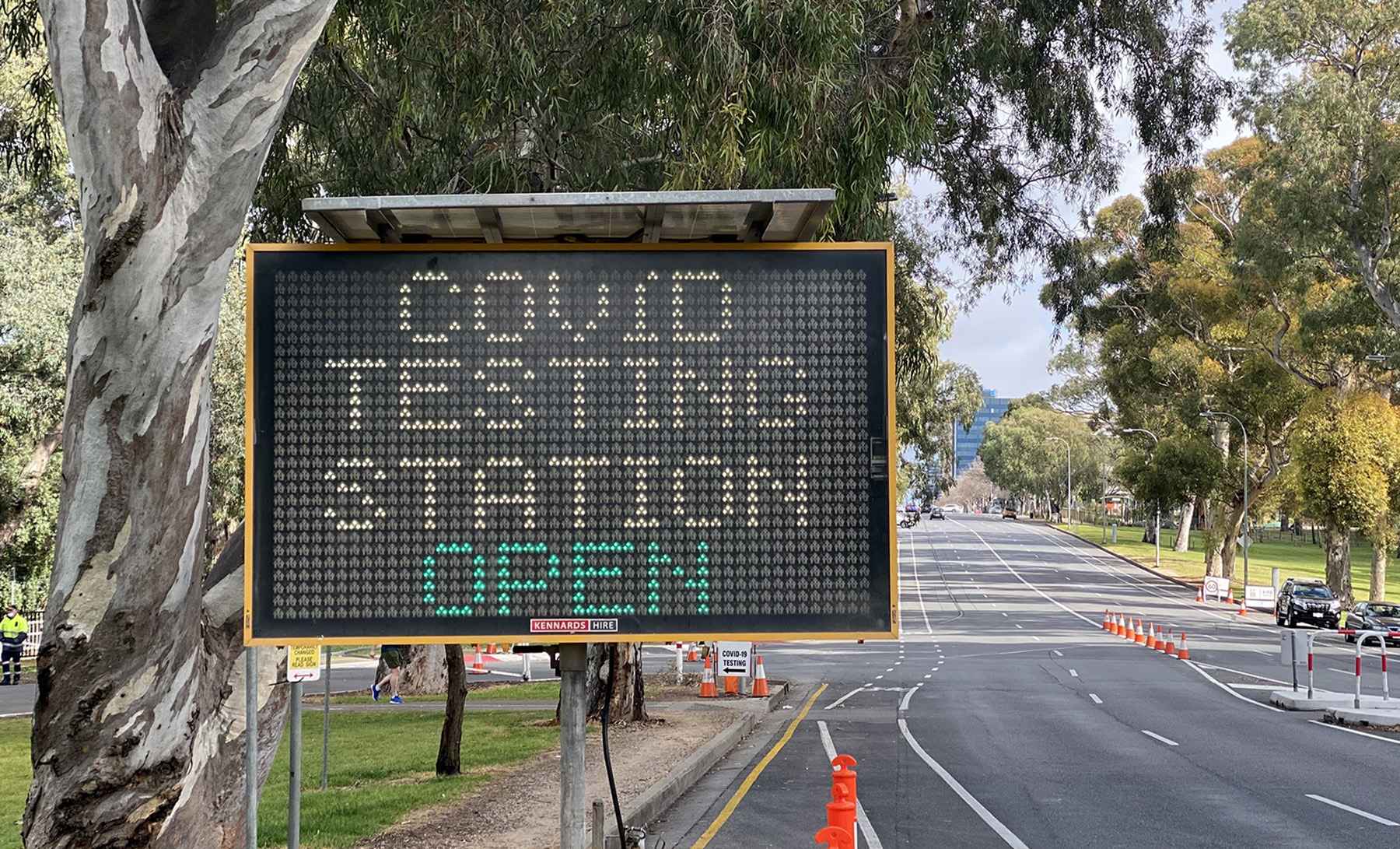 The number of coronavirus tests being conducted each day has dipped in South Australia, with health officials questioning if the decline in COVID-19 cases in Victoria has served to reduce anxiety levels.

Testing rates in recent weeks surged in SA to more than 7000 a day as the second wave of infections took hold in Melbourne.

But only 4100 tests were conducted on Saturday and Deputy Chief Public Medical Officer Mike Cusack said there was a “real possibility” that people were feeling less concerned.

“As the level of anxiety in this state diminishes, that will move the testing number down,” he said.

“In that instance, we would strongly encourage people with any symptoms at all that they still need to get tested.”

An additional drive-through testing centre was set up at Victoria Park at the start of the month and was initially flooded with hundreds of cars queuing for tests every day.

But falling demand reduced the line up to just a few vehicles at times on the weekend.

Master Builders Australia is calling on the Federal Government to extend its HomeBuilder grants scheme for an additional 12 months to the end of 2021.

The scheme was announced in June to boost the residential construction sector and is due to end on December 31.

Under the scheme, eligible applicants can claim a $25,000 HomeBuilder grant towards the construction or renovation of a home. More than 7000 South Australians registered interest in the scheme in the first month of its launch.

The government expected it to drive 20,000 new builds and 7000 renovations.

Master Builders Australia claims the scheme announced in June has been “the most effective government stimulus measure in a decade”.

But a Senate committee inquiry examining the government’s coronavirus stimulus measures heard last week only 247 applications for the program, including 157 from South Australia, had been received so far.

Master Builders Australia CEO Denita Wawn said the organisation had downgraded its forecast for the housing sector for 2020/21 and was now predicting a 27 per cent fall in homebuilding activity compared to 2019/20.

“This will be calamitous for many of the nearly 370,000 home building businesses that are vital to local economies and communities throughout Australia unless the Government steps in with extension of HomeBuilder and other stimulus measures,” Wawn said.

“Our modelling shows that, based on the Government’s estimate that HomeBuilder Mark I will cost $680 million, that a one-year extension, or HomeBuilder Mark II, will require an investment of $1.3 billion, return a boost to GDP of up to $4.5 billion, create more than 4,500 additional new jobs and result in the construction of more than 6,000 new homes.” 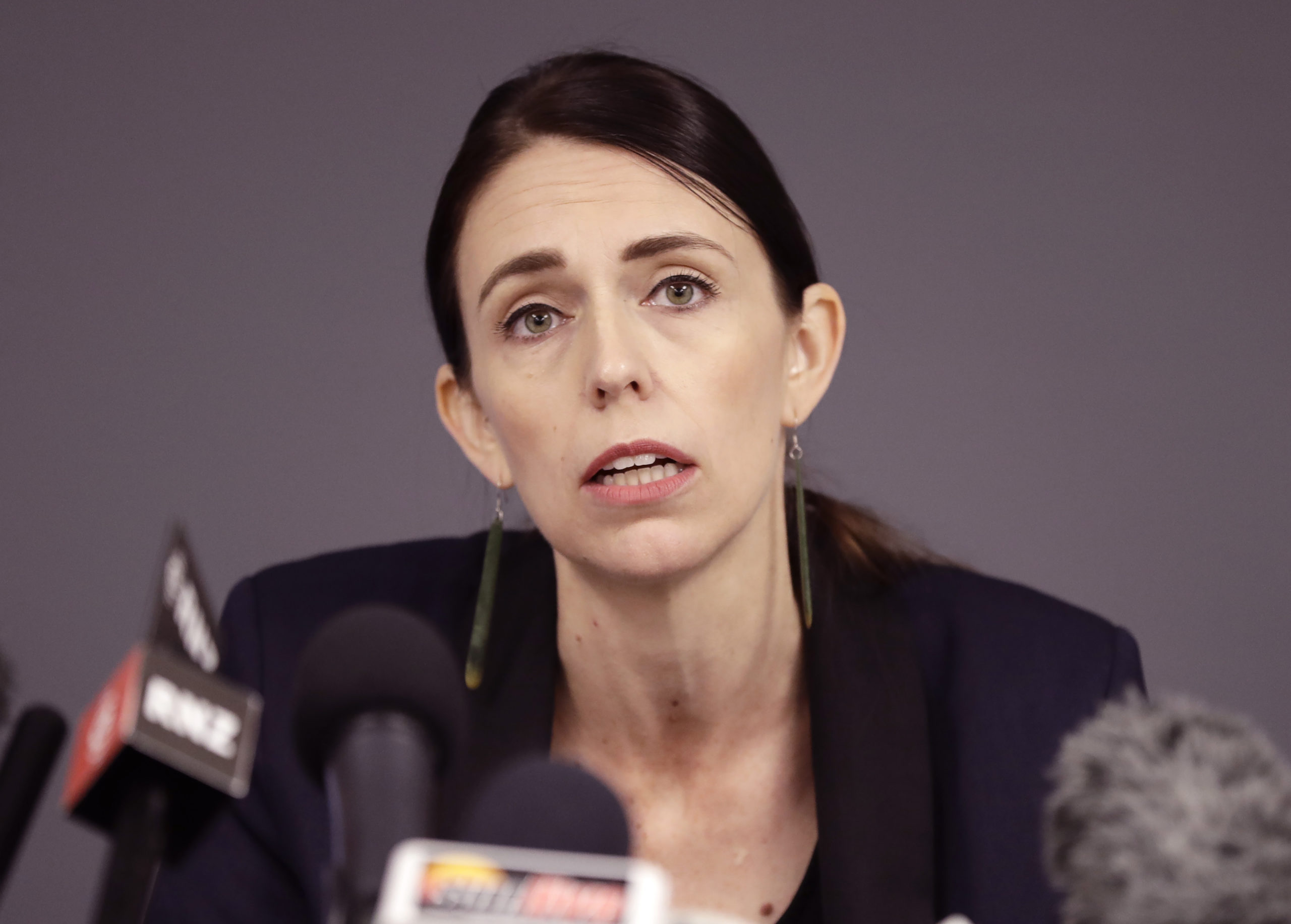 Prime Minister Jacinda Ardern has delayed the New Zealand election until October 17 after an outbreak of COVID-19 in Auckland.

New Zealand was set to go to the polls on September 19 until the country’s first community outbreak in 102 days.

However, Ardern has chosen to defer the poll by four weeks, responding to calls from the opposition and her deputy Winston Peters.

“I want to ensure we have a well run election that gives voters all the information they need … and delivers certainty for the future,” she said in Wellington on Monday morning.

“I do need to provide certainty, a sense of fairness and a sense of comfort to voters to ensure them that this will be a safe election.”

The Labour leader first announced September 19 as the date for a general election back in January.

However, the surprise return of the virus to Aotearoa on the day before the Parliament was due to be dissolved led to an 11th hour review of the poll date.

The Auckland outbreak has infected 49 people and prompted Ms Ardern to send the country’s biggest city into lockdown.

Democratic presidential nominee Joe Biden has offered his condolences to US President Donald Trump after the death of his younger brother Robert.

“Mr President, Jill and I are sad to learn of your younger brother Robert’s passing,” Biden wrote in a tweet, referring to his wife.

“I know the tremendous pain of losing a loved one – and I know how important family is in moments like these. I hope you know that our prayers are with you all.”

The president visited his brother at a New York City hospital on Friday after White House officials announced that he had fallen ill.

The cause of his death was not immediately released.

Biden, who is currently running against Trump for office, lost his first wife and daughter in a car accident in 1972. His son Beau died of a brain tumour in 2015.