The draft report of the Electoral Districts Boundaries Commission effectively pits the 2022 state election battleground in six marginal seats – four of which are currently Liberal-held.

But the proposed redistribution shifts all of those in Labor’s favour – with Elder (held by Carolyn Power), Newland (Richard Harvey), Adelaide (Rachel Sanderson) and King (Paula Luethen) becoming nominal ALP seats based on a 50:50 statewide voting split between both major parties.

Under that scenario, Labor would snare a majority 24 seats to the Liberals’ 23. 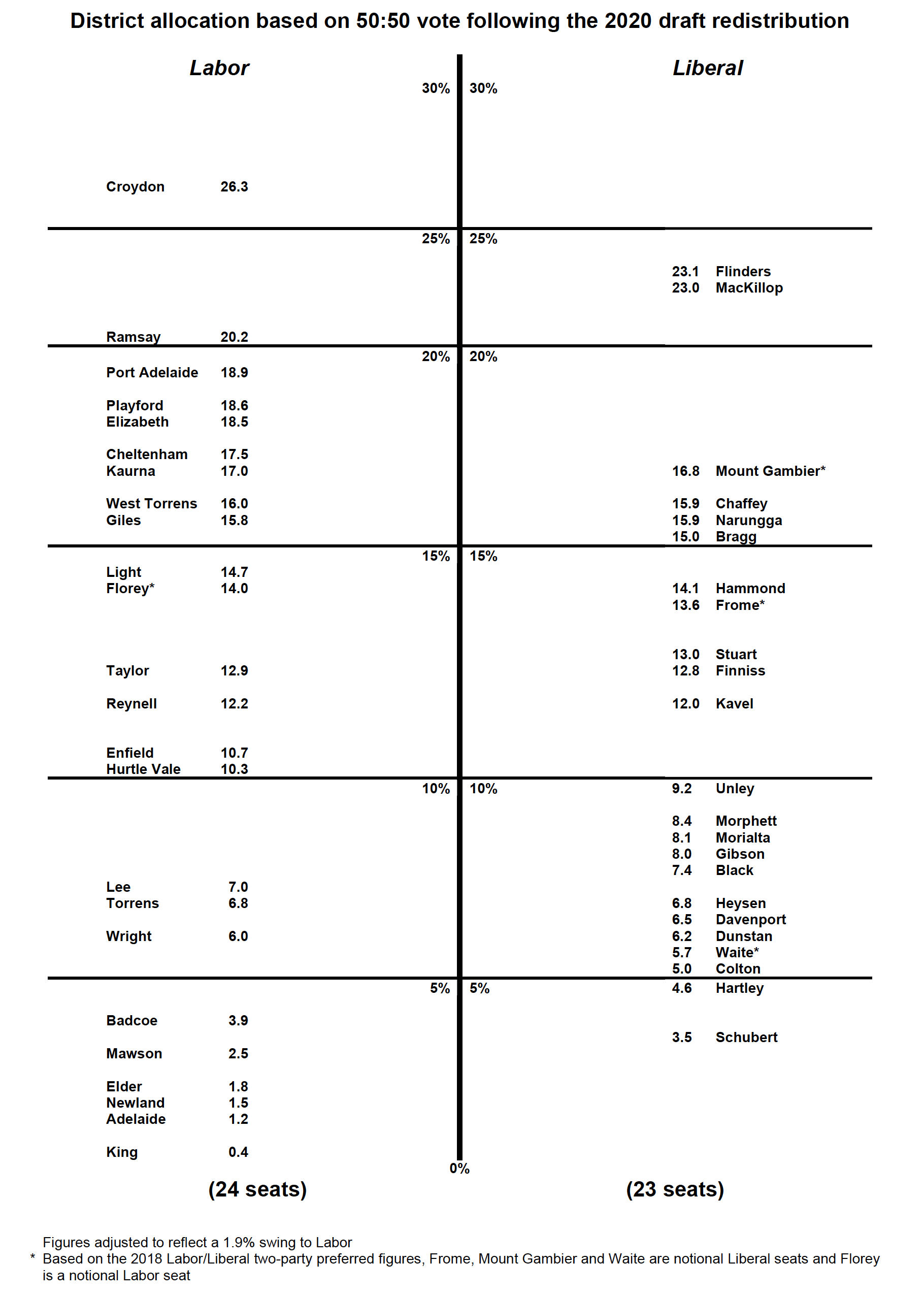 If the statewide result from the 2018 election were repeated, the Liberals would still hold a nominal 27 seats in the 47 seat parliament (with crossbench-held Frome, Mount Gambier and Waite considered effectively Liberal), but their most marginal electorates have become increasingly vulnerable. 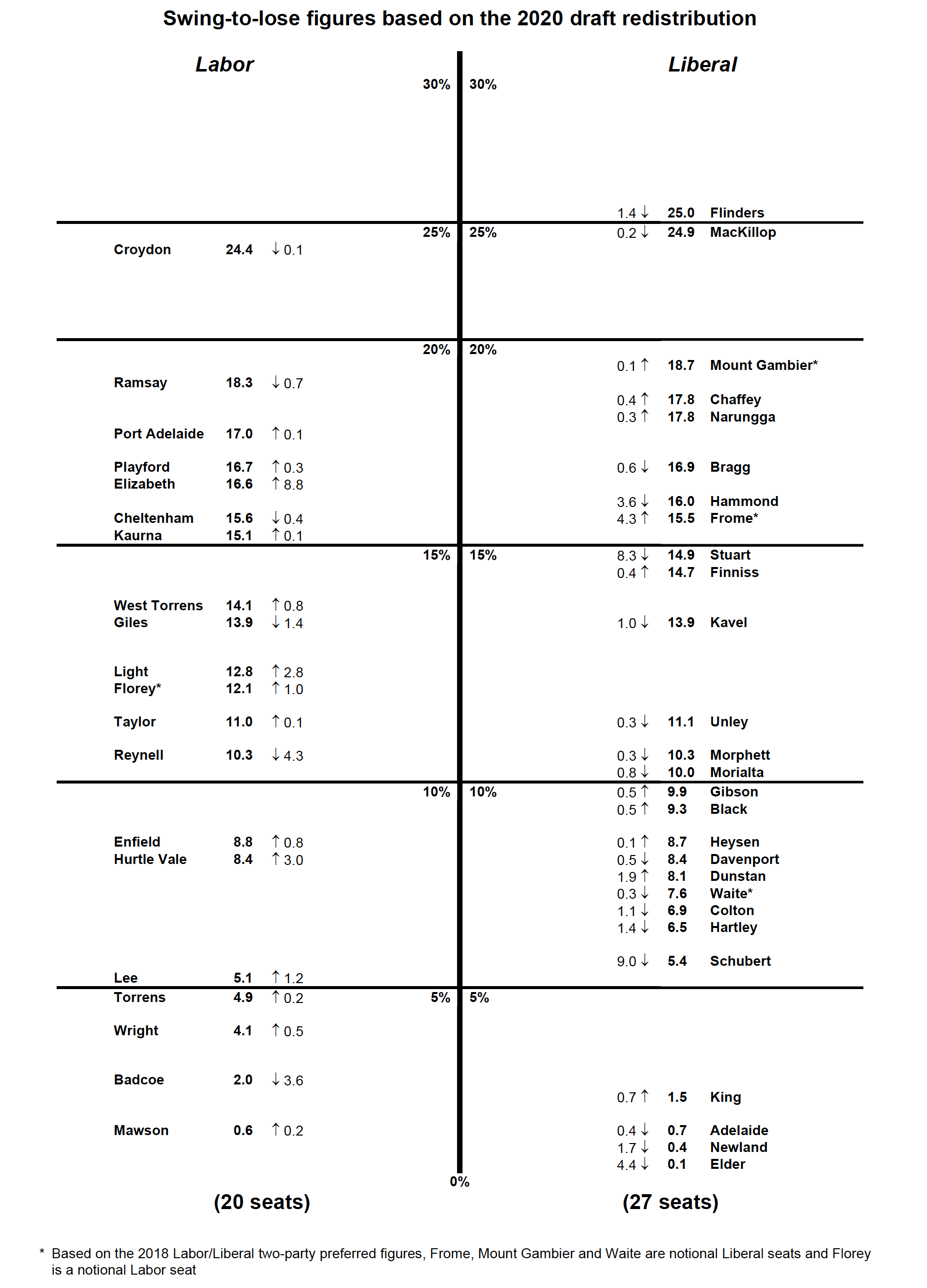 The 2018 result was also skewed by the impact of Nick Xenophon’s SA Best, and the impact of that party’s demise as an electoral force is yet to be determined.

The new SA electoral boundaries leave the Marshall Government's majority in tact, but lower the uniform swing that would defeat it. #saparli According to EDBC methodolgy, government left with 3 seats under 1%, swing to lose down from 4.4% to 2.0%.

On an equal 50-50 split of the statewide vote, axed Transport Minister Stephan Knoll’s Barossa-based seat of Schubert would become the Government’s most marginal seat on 3.5 per cent (5.4 per cent if the 2018 result was repeated), with all five seats nominally considered marginal (under 3 per cent) falling on Labor’s side of the electoral pendulum.

ALP state secretary Reggie Martin said in a statement: “Labor acknowledges that the Commission has set the number of electors closer to the quota, but we are disappointed that despite achieving 48 per cent of the statewide vote [at the 2018 election] Labor only has 42 per cent of the seats on these draft boundaries.”

SEE THE MAPS: How the proposed redraw affects your area

“The Liberal Party will immediately analyse the proposed boundaries and detail provided in the Report and prepare a written response to the Commission which is due next month,” she said in a statement.

“Following the next round of consultation, the Commission is expected to gazette final boundaries in November.”

The Liberal Party was last night polling constituents in key seats, understood to have included Elder and Waite, asking respondents their views on the Government’s performance, how Premier Steven Marshall and Labor leader Peter Malinauskas are perceived and whether respondents are inclined to re-elect their local Liberal MP.

The boundaries commission, chaired by Supreme Court judge Trish Kelly, was forced to contend with a significant change, after the former Labor Government managed to jettison the long-standing “Fairness Clause” from the SA Constitution Act in late 2017.

That clause held that the electoral boundaries should help ensure the party with a statewide majority can also win a majority of seats – and the previous commission’s interpretation of it saw one of the most dramatic shake-ups in SA’s electoral history.

But the draft review decided there was “self-evidently no longer a requirement on the Commission to ensure, as far as practicable, that the electoral redistribution… is fair to prospective candidates and groups of candidates in that if candidates of a particular group attract more than 50 per cent of the statewide two-party preferred vote they will be elected in sufficient numbers to enable a government to be formed”.

Instead, the report seeks to ensure each electoral district has an equal number of electors, as far as possible – a requirement that has seen drastic changes to seats in SA’s north, particularly around the Upper Spencer Gulf.

Independent Geoff Brock – who previously served in the Weatherill Labor Government – confirmed to InDaily that under the proposed boundaries he would be forced from the seat of Frome he has held since 2009 and would run in Stuart, currently held by Liberal frontbencher Dan van Holst Pellekaan.

“That’s an insult to the citizens of Port Augusta.”

He said he was “very loyal” to his constituents in other parts of his seat but “I’d be silly and disloyal to Port Pirie citizens if I didn’t [have] Port Pirie in the seat I’m going to go for”.

“Everyone’s got to be realistic about that – it’s a real disappointment to me, quite frankly,” he said.

Sources suggested Brock would stand a good chance in the redrawn seat of Stuart, with some Liberal insiders speculating Van Holst Pellekaan might opt to contest the new Frome instead.

The Energy Minister did not buy into that speculation, saying: “Before the last election, the draft boundaries announced were nothing like the actual final boundaries, so I’ll comment on the final boundaries when they’re available.”

Both major parties are now expected to kickstart preselection processes to select candidates in key battlegrounds, with Labor expected to endorse Right-faction adviser Lucy Hood for Adelaide and the Left’s Rhiannon Pearce in King.