According to the Government Gazette, the Premier took scheduled leave for four days from Saturday, returning late yesterday.

But the Opposition has questioned the decision to holiday in the Sunshine State, which Marshall confirmed today was “for my son’s graduation and it’s perfectly acceptable to travel into Queensland”.

Travel advice issued by Police Commissioner Grant Stevens on July 31, under the heading “People urged to rethink travel to Queensland”, advised “South Australians considering travel to and from Queensland to assess their need to travel against the implications of possible increasing restrictions in the future”.

“To prevent a second wave of COVID-19, it is possible travel restrictions may be imposed in the future which will result in people entering from Queensland being required to undergo mandatory testing and self-quarantining for 14 days upon arrival,” the advice warned.

“At this time, no decision has been made regarding the re-introduction of travel restrictions nor is there any date being considered. The situation in Queensland will continue to be monitored.” 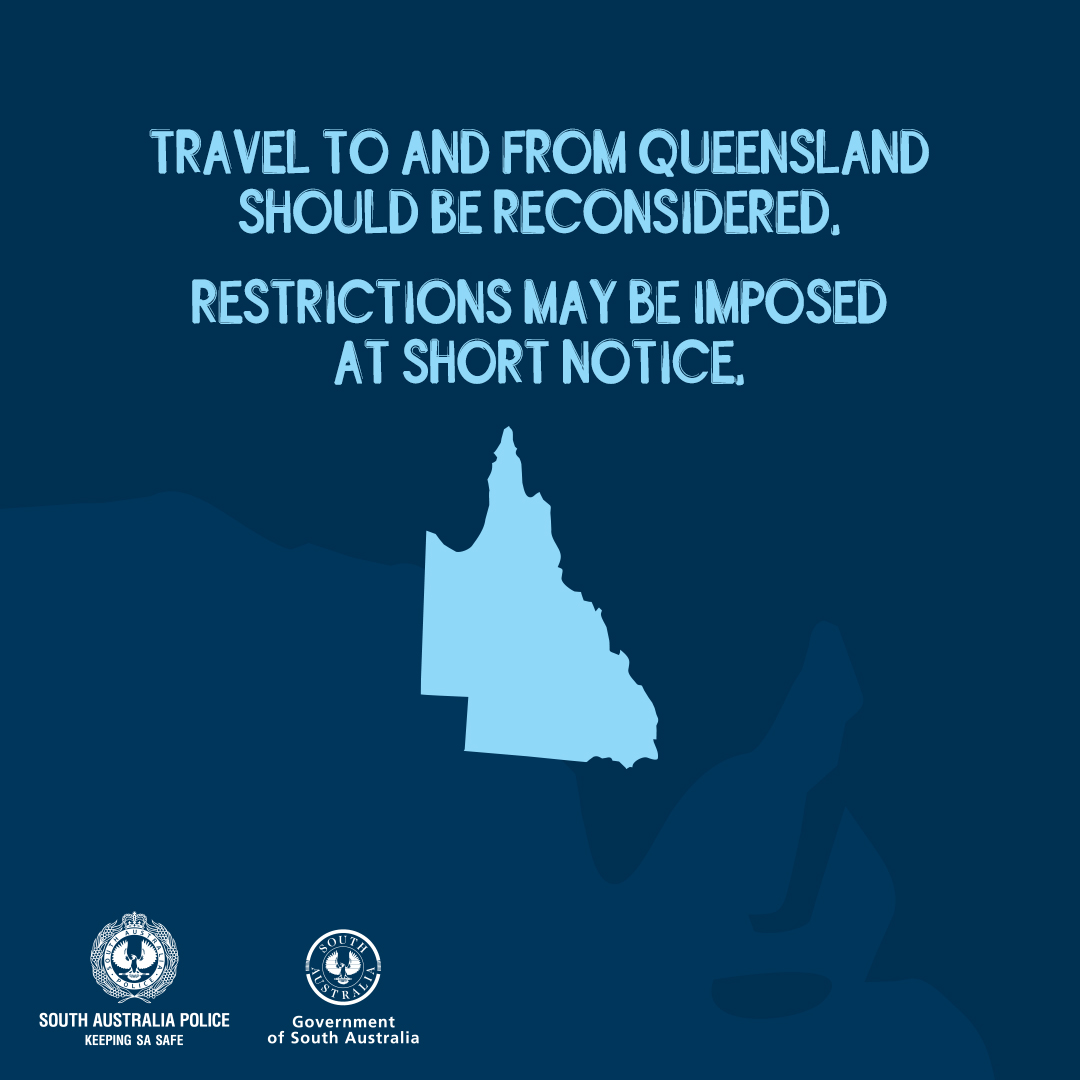 An image that accompanied the latest travel advice from SAPOL.

That came in response to a case in which three Brisbane women – who subsequently tested positive for coronavirus – were charged after allegedly deliberately misleading authorities when crossing back into Queensland from Victoria.

Opposition spokesman Tom Koutsantonis said today: “No-one begrudges the Premier taking leave or a holiday, but a lot of South Australians would be wondering why he didn’t follow the advice of state coordinator Grant Stevens.”

“We should all be sacrificing equally – not one rule for the Premier and another for everyone else.”

But Marshall rejected the criticism, defending his decision to visit his son Charlie, 22, which came to light after Queensland Opposition Leader Deb Frecklington tweeted a photo of her and the Premier together.

Met with Premier @marshall_steven to discuss the @LNPQLD's plans to get Qld working again by stimulating the economy, creating a decade of secure jobs & dragging Qld out of recession. We'll start work on the New Bradfield Scheme & invest in new infrastructure. #qldpol pic.twitter.com/OHFozT8BEb

“I think the Police Commissioner put out some advice last month which suggested that there could be changed situations in the future based on the fact that [some] Queensland women travelled to Victoria, got infected and came back [so] we were really on heightened alert last month,” Marshall told reporters today.

However, he insisted, “Queensland has done exceptionally well with very, very low numbers over the last two weeks”.

It has been 11 days since Queensland recorded a local infection, with no new cases overnight.

However, SAPOL told InDaily today there had been no change to the July 31 advice, with the state’s Transition Committee “closely monitoring what is going on in other states”.

Asked whether he’d encourage anyone who wanted to travel to Queensland to do so, Marshall said: “We’d encourage people to always been aware that there may be changed conditions, but certainly my travel was perfectly legitimate – it meets all the requirements.”

“What I would do is encourage people to look very, very carefully at the travel arrangements we have in place, and if your travel fits within those then, sure – that’s fine.

“But we’ve got to be aware we’re in a pandemic – there are restrictions and they can change at the last moment… but Queensland has done very well managing [those] cases they had coming back from Victoria.”

Marshall was asked last Thursday at a media conference what the reason for his scheduled leave was, responding: “I think we’re all entitled to take leave, and I’ve put an application in to his Excellency the Governor and he’s given me four days leave beginning this weekend.”

The new controversy comes just days after an annual general meeting of around 250 members of the SA Liberal Women’s Council at Adelaide Oval prompted similar accusations of double-standards, given funerals and weddings are currently capped at 100 – accusations the Premier strongly rejected last week.

“The virus has to be contained and minimised,” McCormack told the Nine Network this morning.

“State premiers and chief ministers have made the border closures to protect their own jurisdictions.”