The Liberal Women’s Council meeting went ahead despite some invitees expressing grave misgivings and some party members moving to have it deferred.

Marshall’s Facebook page was last night hammered by negative feedback about the event, which fell on the same week some other public gatherings were drastically curtailed due to escalating coronavirus concerns – a point emphasised by insiders who told InDaily the “double-standard” failed the “pub test”.

But those concerns were dismissed by SA Liberal moderates as factional grandstanding by the party’s Right wing, with InDaily revealing yesterday that moderate faction leader Simon Birmingham sent colleagues a scathing critique of Right faction “cronies” exploiting the Coronavirus crisis to “undermine democracy within our party”.

Marshall, a factional ally of Birmingham – whose wife Courtney Morcombe works as the Premier’s chief of staff and is understood to have attended the ballot – was today taken to task by FIVEaa presenters Will Goodings and David Penberthy, who broadcast concerns about the event yesterday.

“This morning the Premier rang our producer Andy Ruzgar and gave him a serve about it,” Penberthy said on air this morning.

“I think the Premier, rather than hassling our staff – which is something we will not tolerate… should hassle the people in the Liberal Party who are putting this about as a story.

“We aren’t the ones who described the event as “insane” [and] “inappropriate”… the people who said these things are members of the Liberal Party – some of them are Liberal members of parliament.

“If they can’t manage their internal politics, that’s a problem for the Liberal Party.”

Goodings, a former media adviser for the Liberals in Opposition, added that “browbeating the media when you’ve got internal Liberal Party problems is not a strategy – it’s a copout.”

Goodings said the station had given Health Minister Stephen Wade “an opportunity to explain [the event] in clear language, which he did… and subsequent to that there’s an abusive phone call” from the Premier.

Penberthy told InDaily he stood by his comments on air, saying: “I think the State Government’s handling of [the pandemic] has been very, very good, but clearly with this issue a lot of people have found it confusing – and some of them are members of the Liberal Party.”

Marshall told reporters today he was not in the habit of calling reporters to comment on stories but “we are in a global pandemic” and he did not want misunderstanding “about a seated AGM with strict guidelines”.

“When we can provide events safely, we should encourage that,” he said.

“We’ve got to be careful not to compare and contrast inaccurately.” 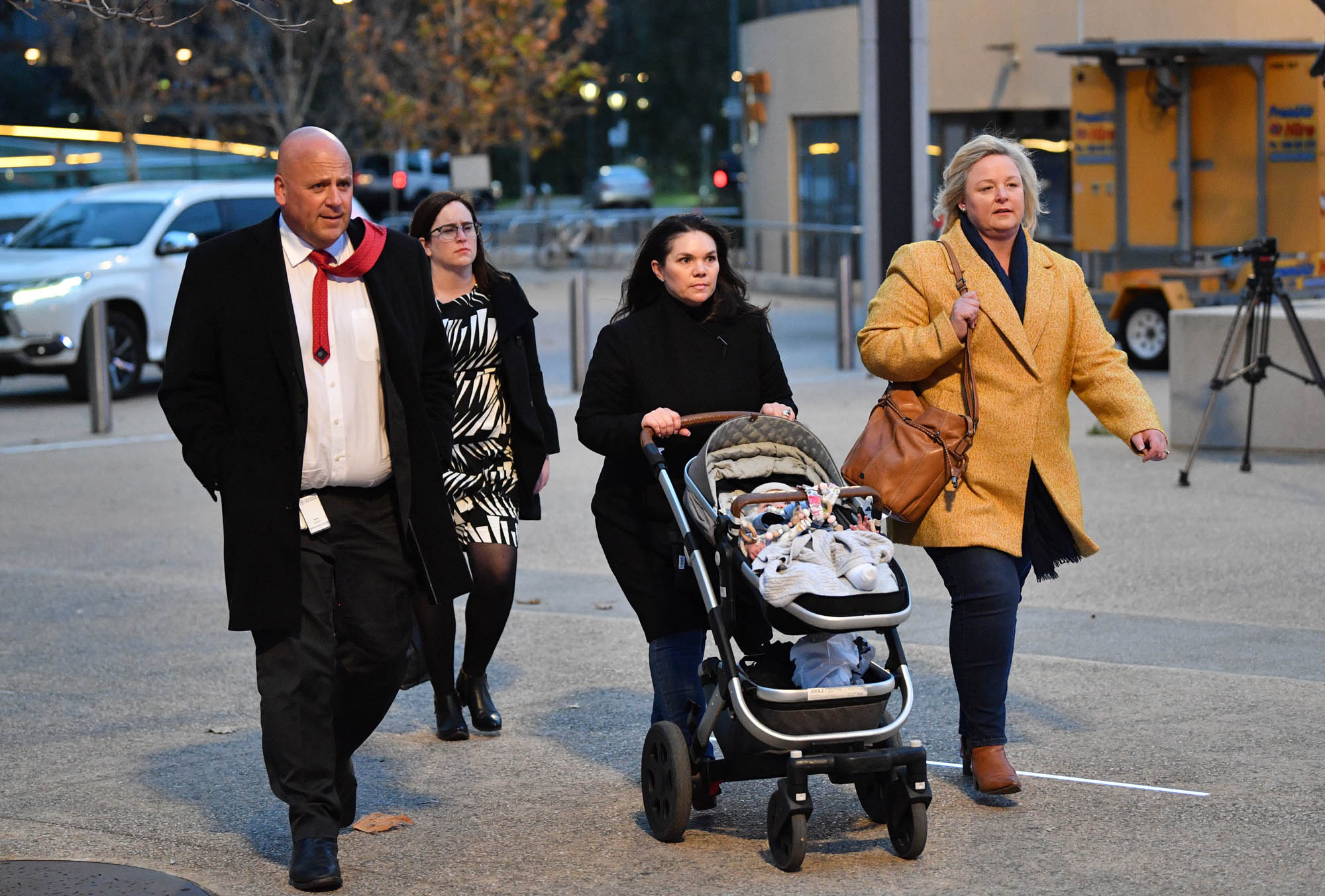 Fledgling state minister David Basham, joined by his adviser Sara Bray, was at the meeting – it’s understood he was there to look after his baby while his wife Kate attended. Photo: David Mariuz / InDaily

Right-aligned Women’s Council president Laura Curran – who was seeking re-election to the key role, which holds a seat on the party’s influential state executive – had told Women’s Council members that she would be “unable to attend” the meeting, having “recently developed flu-like symptoms that fit the criteria of COVID-19”.

“While I am sure I am fine, I have taken medical advice and been tested for COVID-19 which means I am required to remain in self-isolation until a negative result is received,” she wrote in an email sent to members this week.

However, she did attend after the test came back negative, and is understood to have delivered a contentious speech alleging she had received several abusive emails from members of the Women’s Council executive.

She did not respond to inquiries today.

It’s understood Birmingham himself came in for criticism during a separate speech by Conservative-aligned Liberal vice-presidential candidate Emma Godfrey, who railed against his reported comments, suggesting the timing and location of the meeting was planned to prevent several members – including from regional areas – from attending.

Curran, however, was soundly defeated in the ballot – losing 184 votes to 38 to former Christopher Pyne staffer Sue Lawrie, a previous Liberal candidate who now works in the office of recently-elevated Marshall Government minister Vincent Tarzia.

One insider said the result was a defeat for the Hard Right, saying “the Taliban got slaughtered”.

Lawrie and state Liberal president Sascha Meldrum declined to comment today, but Pyne’s former chief of staff Hannah March, a former Women’s Council president, told InDaily: “Laura Curran enjoyed the unanimous support of Liberal Women’s Council State Council delegates two weeks ago when she was preselected to a safe seat in the Legislative Council on a ticket that has six women.”

“Laura will become the youngest Liberal Woman ever elected to the Legislative Council – any suggestion she has not been supported is wrong,” she said.

Marshall too was in a bullish mood about the event, with a Facebook response to critics – signed off by his “Team” – arguing: “There’s been so much misinformation going round about an AGM held by the Liberal Women’s Council at Adelaide Oval last night.”

“The ridiculous claims that this was a ‘lavish dinner’ and 700 people were in attendance are completely false… contrary to those reports, the AGM met strict COVID-19 guidelines with all attendees seated and spaced appropriately,” the post read.

“There were not 700 people in attendance [and] this event followed the same strict guidelines that apply to the rest of South Australia.” 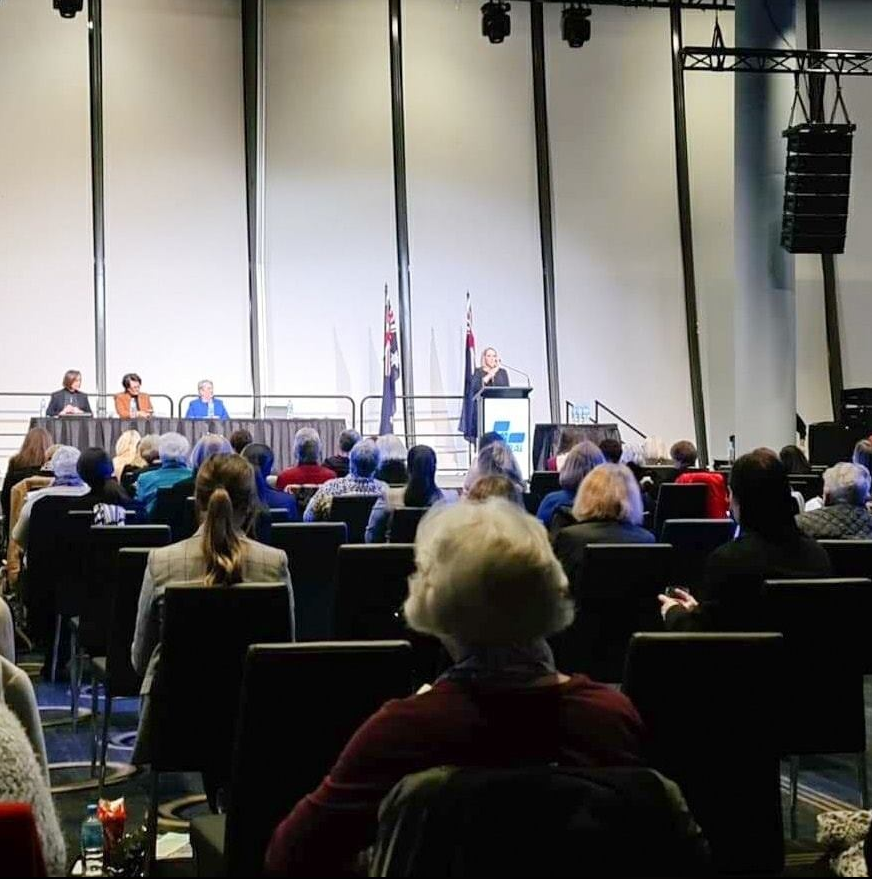 A photo of the event posted on the Premier’s Facebook page, with his Deputy Vickie Chapman seated on stage.

InDaily understands around 250 people attended, including party ‘observers’ – with many of the more than 600 council members rarely attending the annual event.

One attendee, Adelaide hypnotherapist Jean Cannon, told InDaily the complaints about the meeting was the result of “stupid misinformation that should never have been there” blaming “a silly bunch of girls” for the “totally and utterly silly and divisive” controversy.

“Most of the women there are completely sensible people who have been members of the Liberal Party for years,” she said.

The 78-year-old, who has been a party member for 60 years, denied factional infighting had escalated significantly, saying “every group you ever go to, you’ll find a small group of people who’ll get grumpy and dissatisfied – it’s normal”.

“Guys do it one way, and the girls do it by getting a little bit bitchy – and that’s just the way life has always been,” she said.

“It’s the way for humans… the vast majority of people in the party just want to get on with sensible policies and help the Liberal party to run a responsible economy.

She insisted Adelaide Oval was the “safest place probably in Adelaide with such a careful COVID plan”.

“There was a young man there sanitising the microphones and podium between every speaker,” she said, noting that there was “some alcohol” served but that attendees had to remain seated throughout the event.

“Probably a third of the people bought an alcoholic drink and sat down to drink it with what they bought at this horrible café outside,” she lamented.

But other insiders expressed dismay that the Women’s Council vote had been heavily influenced by male Liberal powerbrokers – from both factions.