People who attended a northern Adelaide gym, café and carpet shop are being asked to immediately self-isolate for 14 days and get tested following two new COVID-19 infections in South Australia today.

SA Health announced the new COVID-19 cases this morning and issued an alert for anyone who visited Fernwood Fitness Centre in Salisbury Downs at 6-8.30pm on August 1, Agha Juice House in Blair Athol at 5-7.30pm on July 31 and Najafi Carpet Gallery in Kilburn at 5-8pm on July 29, urging them to self-isolate and get tested if they develop symptoms.

The alert also extends to the School of Languages at Roma Mitchell Secondary College, Gepps Cross on the evening of July 28, Thebarton Senior College, Torrensville, on July 30 and 31 and the Walkers Arms Hotel at Walkerville on July 27, 28 or 29.

Those who visited the schools or hotel do not have to self-isolate but are asked to monitor yourself for symptoms and immediately self-isolate and get tested if you develop any symptoms at all, even if mild.

South Australian chief public health officer Professor Nicola Spurrier said both new cases are young women who were diagnosed yesterday, one of whom was a close contact of another confirmed case related to the Roma Mitchell Secondary and Thebarton Senior Colleges cluster.

In new measures announced yesterday, home gatherings will be limited to 10 people, down from the current 50 people, and people will only be allowed to drink alcohol at licensed venues while seated.

The state is looking at all density requirements, which currently require only two square metres for each person, and is likely to cut the number of people at AFL games from about 20,000 to about 10,000.

Penalties of up to $20,000 have been put in place for second-time restriction breakers in Victoria as a 1000-strong workforce is called in to monitor the state’s tough new  coronavirus isolation rules.

Victoria this morning recorded 439 new cases of coronavirus and 11 more deaths, all of which were linked to outbreaks in aged care facilities.

The rising death toll comes as Victoria settles into a new stage four lockdown in Melbourne, bringing with it expensive fines for people not self-isolating.

Infected people caught breaching the rules for a second time will be slapped with a $4957 on the spot fine, which will grow to $20,000 if the matter goes to court.

Victoria Police issued 161 fines on Monday to people flouting coronavirus restrictions, including 60 people who were not wearing masks.

An additional 250 police, 500 ADF and 300 health staff will monitor the compliance.

“That team is growing substantially and that means every single positive case will be door-knocked multiple times, random and repeated doorknocks,” Andrews told reporters.

It comes after new research revealed the state’s earlier stage three restrictions in Melbourne potentially saved the lives of hundreds of people.

Research from the Burnet Institute, published in the Medical Journal of Australia todday, found the state’s response to the second wave of COVID-19 averted 9000 to 37,000 cases between July 2 and 30.

Based on the World Health Organisation’s mortality rate of 3.4 per cent, the restrictions potentially saved 1258 lives.

The 11 deaths announced today takes Victoria’s COVID-19 toll to 147 and the national toll to 232.

Roughly 250,000 more Victorians will be put out of work as part of the state’s three-tiered system for workplaces which come into effect from Thursday.

Among the restrictions, retail outside of supermarkets, grocery stores and bottle shops will have to close to online shopping only.

Victoria’s stage four lockdown is expected to run until at least September 13 – six weeks away – and about 250,000 more people will be out of work as a result.

Schools in Melbourne are closed for a pupil free day today as students recalibrate to remote learning from today.

Allowances paid to South Australian MPs should be completely overhauled to prevent some “double or even triple-dipping”, SA Greens MP Mark Parnell says.

In a submission to the SA Remuneration Tribunal this morning, Parnell said the system must be made more transparent to stop rorting.

“Under the current rules, some members of parliament are double or even triple-dipping into taxpayers’ money,” Parnell said.

He said the worst offenders were ministers who received a near $14,000 travel allowance each year regardless of whether they travelled or not.

They can then be paid a separate accommodation and meals allowance of up to $507 each day they are away, and still claim an extra accommodation allowance available if they happen to live more than 75 kilometres from Adelaide and need to stay in the city for work.

Both have since repaid some of the money they received.

President of the Legislative Council, Terry Stephens, resigned after an ABC report into the allowances to his arrangements being referred to the Independent Commissioner Against Corruption.

“The mass resignations from ministerial and other senior positions shows that these MPs know full well that what they have been doing doesn’t pass the sniff test, the pub test, the water-cooler test or any other type of test you can think of,” Parnell said.

The tribunal met to review MP expenses. The state government also asked it to clarify what it says are ambiguous rules surrounding some allowances.

Retail sales in Australia fell by 3.4 per cent in the June quarter amid coronavirus lockdowns, which is the biggest drop since the GST was introduced in 2000.

Cafes, restaurants and takeaway food services were the hardest hit (-29.1 per cent), according to seasonally adjusted data from the Australian Bureau of Statistics.

The bureau revised its estimate of retail sales in June from a gain of 2.4 per cent to 2.7 per cent.

June was the first full month of trade after the first lockdowns were introduced to slow the spread of coronavirus.

This built on the 16.9 per cent rise in May, which followed a 17.7 per cent slump in April when the pandemic first impacted on the economy.

“Despite monthly rises in May and June 2020, the June quarter saw the largest fall in seasonally adjusted retail volumes since the introduction of the GST in the September quarter 2000.”

It declined 0.4 per cent, to be at its lowest level since late April.

Meanwhile, the Reserve Bank decided to leave the cash rate at a record low when its board met today.

As economists expected, the central bank kept the cash rate at 0.25 per cent as the economy is further challenged by the start of a six-week hard lockdown in Melbourne. 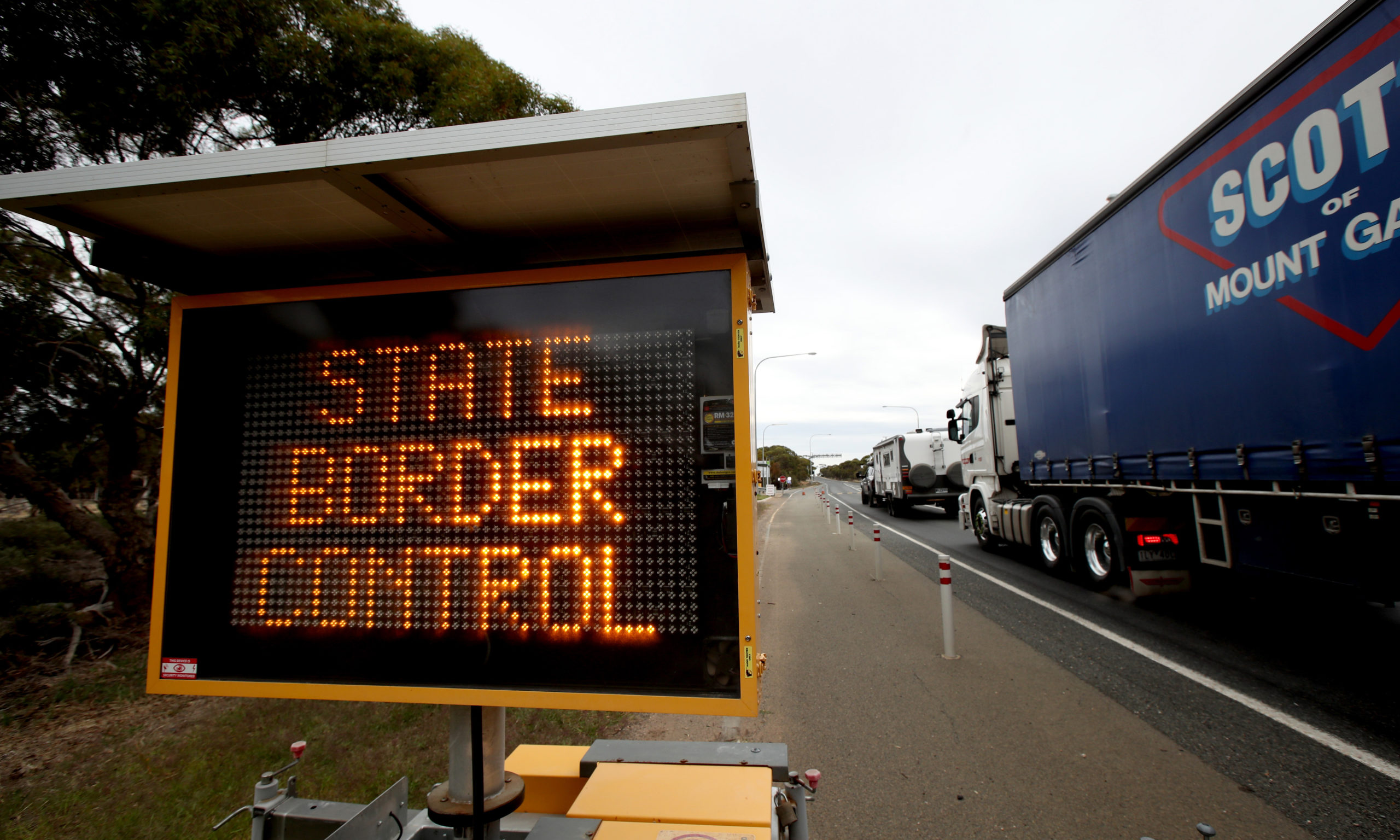 An Adelaide man is due to front court today charged with eight counts of breaching South Australia’s COVID-19 rules as the state prepares for a  new set of restrictions.

Police will allege the 31-year-old attempted to enter SA from Victoria at a Pinnaroo border checkpoint on Sunday, but was turned away as he did not meet the essential traveller status.

He returned to the checkpoint 30 minutes later and was again refused entry.

However, police said the man did not return to Victoria but filled up with fuel at a nearby service station before travelling into metropolitan Adelaide.

Police will further allege that since the start of April, the man breached directions of the Emergency Management Act on seven other occasions.

He is expected to appear in Adelaide Magistrates Court today, the latest in a string of people charged with breaching border rules.

Those rules, which prevent Victorians from entering SA and impose quarantine restrictions on people from NSW and the ACT, are set to remain in place for an extended period with the persistent surge in coronavirus infections across Melbourne.

The pandemic was initially slower to reach Latin America – home to about 640 million people – than much of the world. But health experts say it has been hard to control the virus due to the region’s poverty and densely packed cities.

The more than 10,000 new cases reported by Colombia’s health ministry on Monday pushed the region past the five million mark.

Latin America has now topped 200,000 deaths. Brazil’s total approached 96,000 on Monday and Mexico surpassed 48,000. The two countries have the world’s second and third highest death tolls, after the United States. 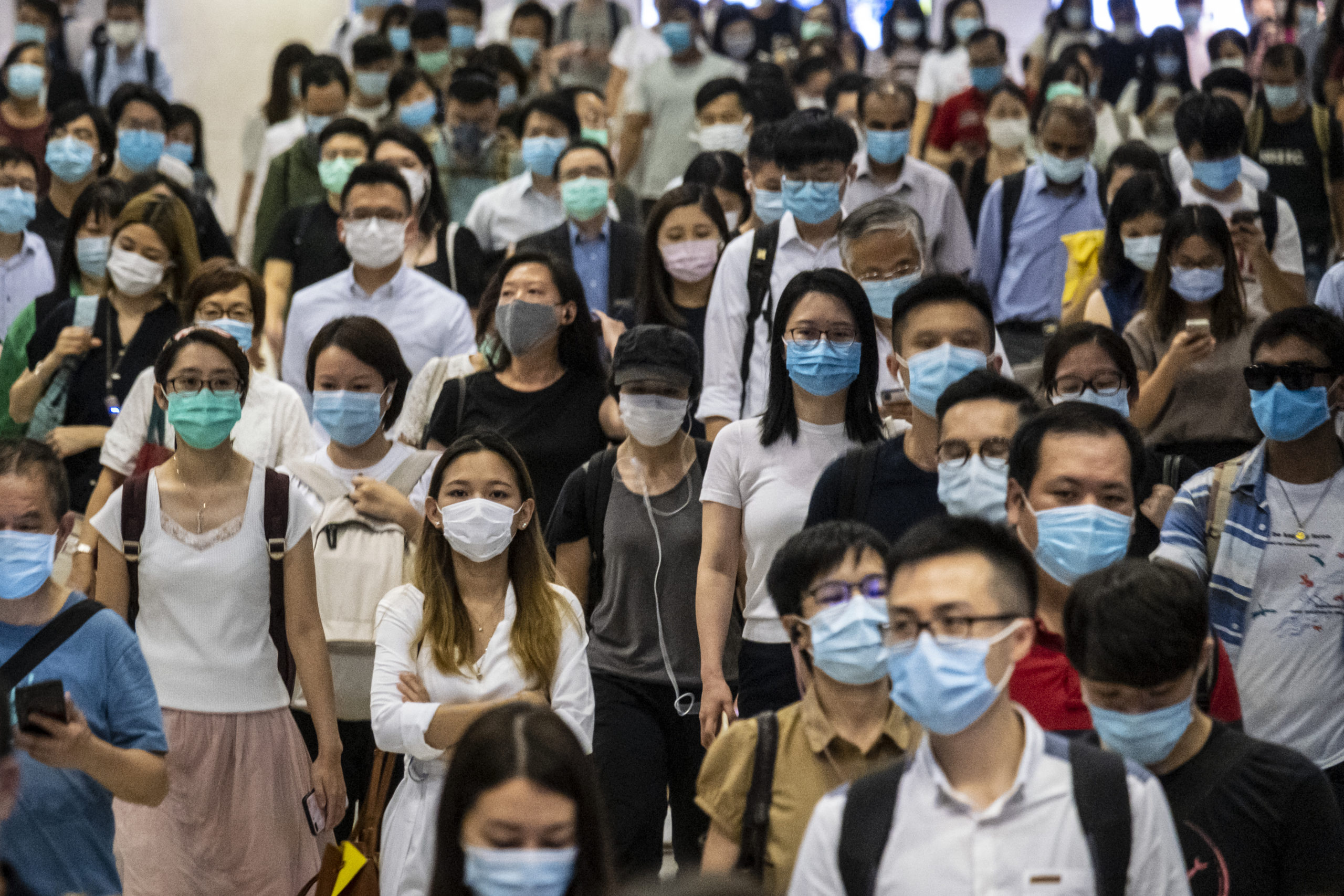 The World Health Organisation says there might never be a “silver bullet” for COVID-19 in the form of a perfect vaccine and that the road to normality will be long, with some countries requiring a reset of strategy.

More than 18.14 million people around the world are reported to have been infected with the disease and 688,080​ have died, according to a Reuters tally, with some countries that thought they were over the worst experiencing a resurgence.

“The message to people and governments is clear: ‘Do it all’,” Tedros told a virtual news briefing from the UN body’s headquarters in Geneva.

He said face masks should become a symbol of solidarity around the world.

“A number of vaccines are now in phase three clinical trials and we all hope to have a number of effective vaccines that can help prevent people from infection. However, there’s no silver bullet at the moment – and there might never be.”

The WHO head said that, while the coronavirus was the biggest health emergency since the early 20th century, the international scramble for a vaccine was also “unprecedented”.

But he underscored uncertainties.

“There are concerns that we may not have a vaccine that may work, or its protection could be for just a few months, not more. But until we finish the clinical trials, we will not know.”

The Chinese city of Wuhan may not be the origin of the coronavirus, senior UN health official Mike Ryan says, announcing extensive studies to track down the animal species that transmitted the virus to humans.

“The fact that that fire alarm was triggered doesn’t necessarily mean that that is where the disease crossed from animals into humans,” WHO emergency operations chief Ryan said during a press conference in Geneva overnight.

The World Health Organisation (WHO) and China are putting together an international team to go to Wuhan to trace back the chain of infections from the first COVID-19 cases that appeared there late last year, after the outbreak was detected by the city’s pneumonia surveillance system.

While Chinese researchers have conducted studies around initial cases and around the Wuhan seafood market to find the source animal, “there are gaps in the epidemiological landscape,” Ryan said.

“What is required is going to be a much more extensive retrospective epidemiological study” to look at the links between the first human cases, he added.

WHO chief Tedros Adhanom Ghebreyesus announced in late June that a small WHO advance team would go to China to prepare this work.

It took a month until the WHO experts and their Chinese counterparts drafted the outlines of a work plan.

On Friday, an international expert group that advises the WHO on the pandemic said the UN health agency should speed up research to find the animal source of the novel coronavirus. 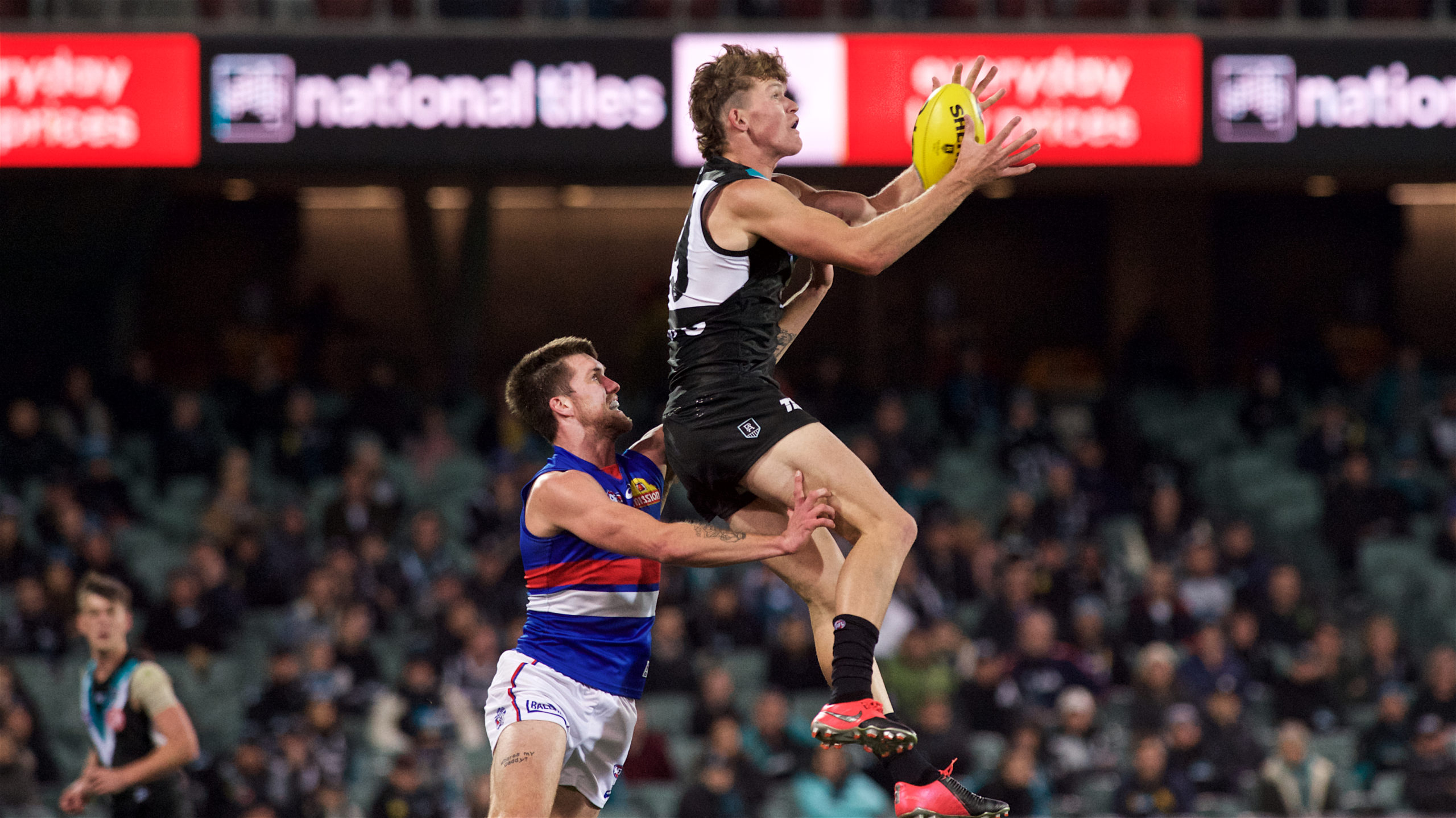 A third-quarter goal blitz helped Port Adelaide to a 13-point win over the Western Bulldogs in the AFL match at Adelaide Oval last night.

The 8.7 (55) to 5.12 (42) win puts the Power a game clear of Brisbane at the top of the AFL ladder with the Lions due meet reigning premiers Richmond in Queensland tonight.

The Bulldogs remain eighth and in a mid-ladder jam – they’re equal on premiership points with three other clubs.

Port’s triumph was created by a brutal 16-minute purple patch in the third term which reaped four unanswered goals after they had trailed the entire first half.