Taxpayers were billed $31,299.96 for the July 2018 trip, which saw the then-Minister for Primary Industries and Regional Development tour parts of Texas and California with his chief of staff Simon Price, concluding with three nights in Modesto, California.

The 18th largest city in California, Modesto is home to the Gallo Family Winery, the world’s largest privately-owned winery.

But for the past three years it’s also been home to Whetstone’s son Nic, whose LinkedIn account lists him as a Project Director of The Schussing Company, LLC and owner of Rubik Built, LLC – both based in Modesto, California.

Nic’s Facebook account lists his birthday as July 14 – one day before his father’s itinerary states Whetstone and his staffer arrived in Modesto for the final leg of their study tour.

Tim Whetstone was one of three ministers to resign last week after being caught up in the country members allowance scandal, having admitted making various claims of up to $234 per night for dates he was not in Adelaide.

While he paid back around $7000 dating back to before he became a minister, he said he could verify other dates during his ministerial tenure for which he was entitled to claim the payment.

Whetstone initially claimed around $3000 for the period covering the 12-day trip, claiming on the expenses form that he was “required to stay in Adelaide” on the relevant dates – despite a travel report on his department’s own website detailing his movements over the same period.

He submitted the country members allowance claim on August 1, 2018 – less than a fortnight after returning from the US.

After the country members claim forms were tabled in parliament, he adjusted those dates to claim for a different period. 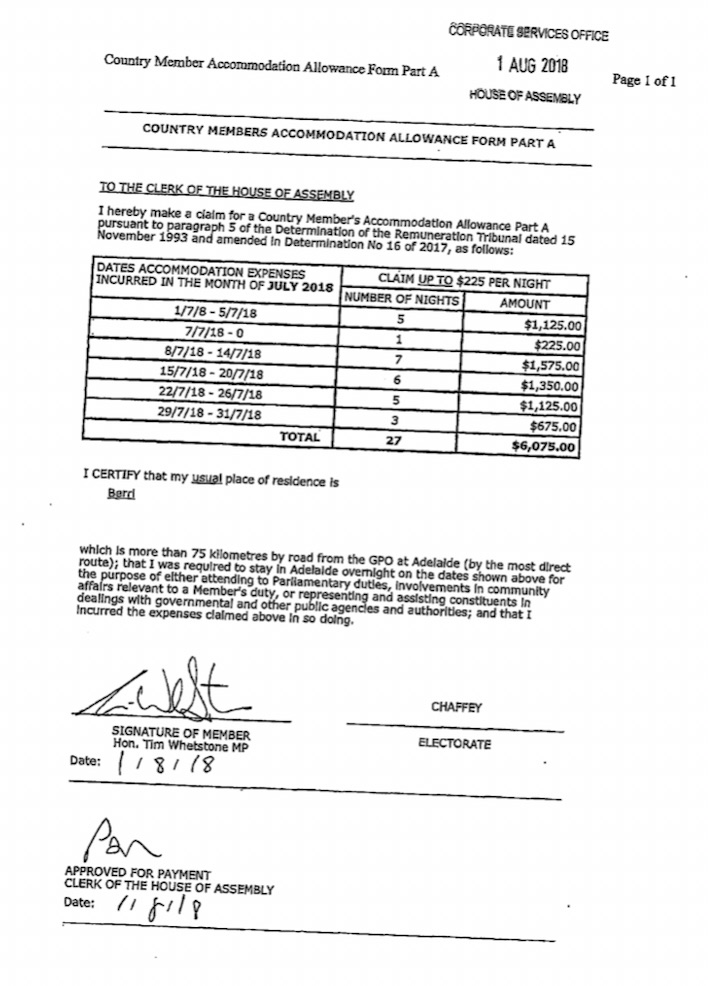 The claim form initially submitted for dates Whetstone was actually in the US.

InDaily asked Whetstone whether he had attended a birthday celebration for his son during his US trip to Modesto, to which he said “No.”

Asked whether he had seen his son during that period, he said: “I’d have to have a look at the Travel Report, just to refresh my memory.”

The travel report makes no mention of visiting any relatives on the trip. 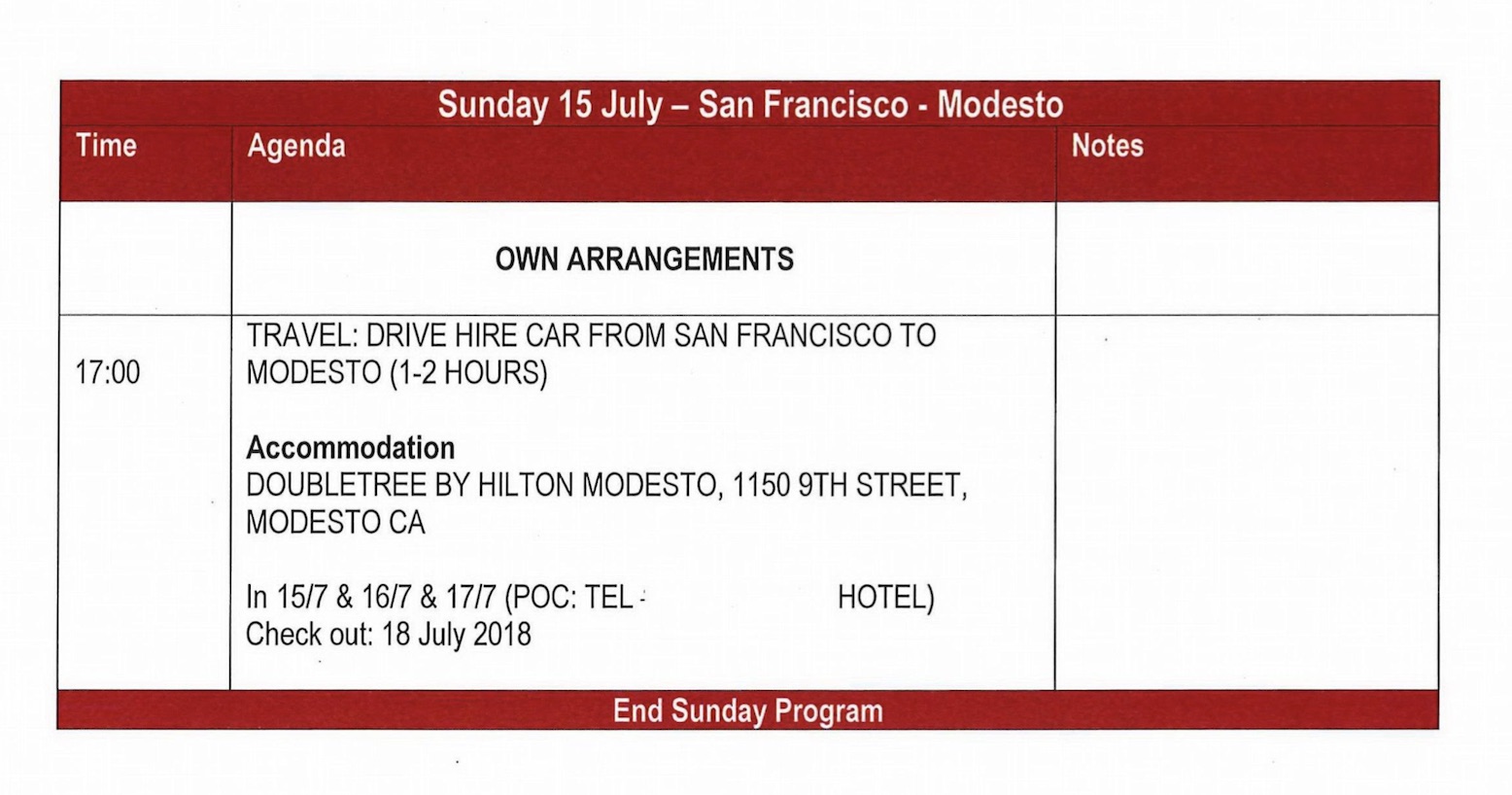 It notes that the minister and his staffer drove themselves by hire car from San Francisco to Modesto – which it says was a one to two-hour journey – on Sunday July 15 at 5pm, with the rest of the Sunday and Saturday July 14 recording no official business, saying only: “Own arrangements.”

On Monday, July 16, the itinerary lists a morning meeting with the Almond Board of California, a midday tour of the Gallo Vineyard “with Luis Sanchez” and a 2pm meeting with “CALTEC AG INC”.

Tuesday has only one event listed, a “Ministerial tour to observe farming area”, with the evening given over to “Own arrangements”.

Taxpayers were billed more than $800 in hotel accommodation for the Modesto leg of the trip, but while Price stayed at DoubleTree by Hilton Modesto at $183.36 a night, Whetstone only used the hotel on the first night of the visit. 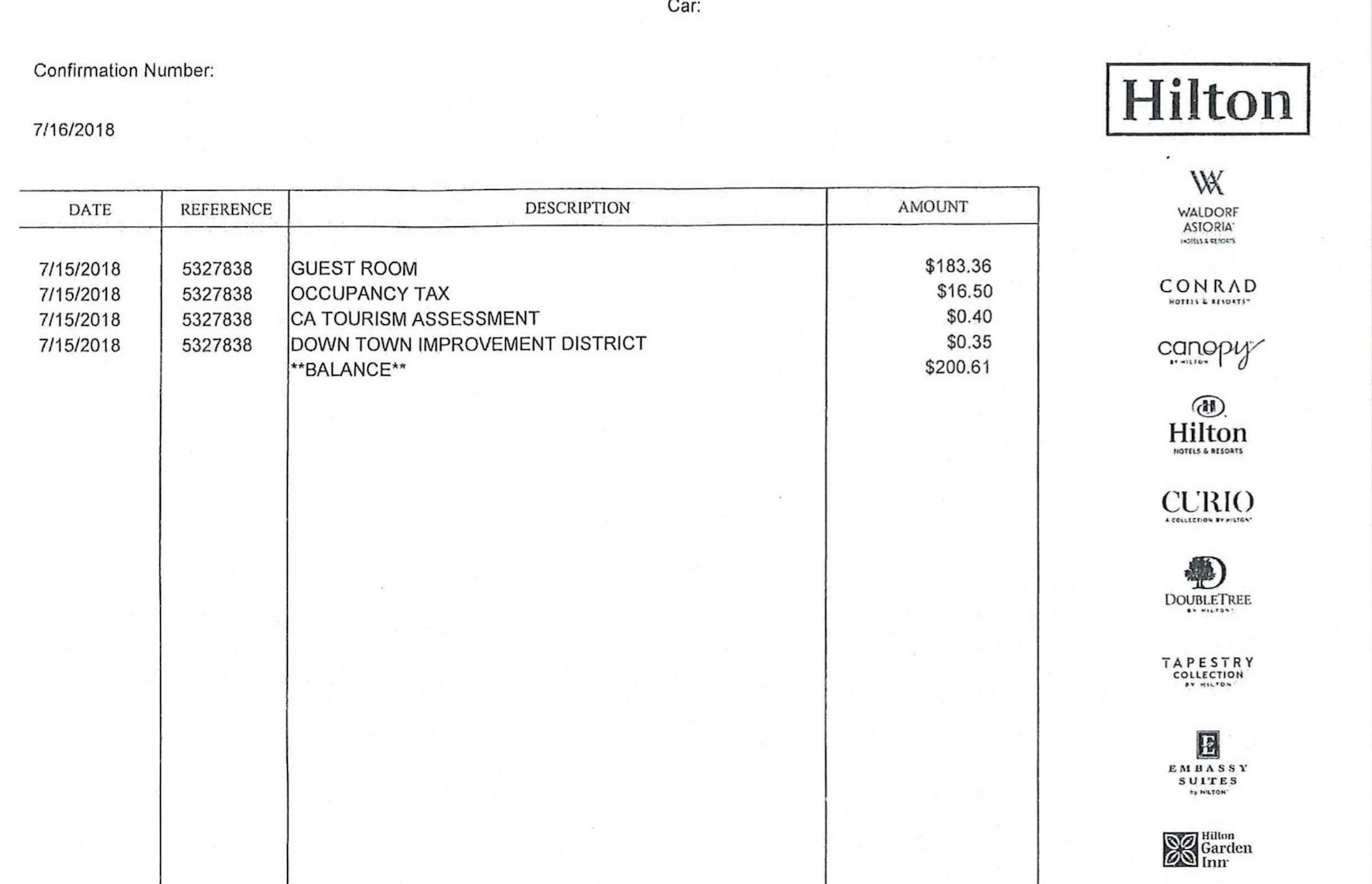 In a subsequent statement to InDaily, responding to questions about whether he saw his son while in Modesto, Whetstone said: “The itinerary for the US trip in 2018 was put together in conjunction with the Department and included positive outcomes from meetings with key AgTech and wine industry representatives.”

“As the travel report states, I had significant meetings and a day of farm visits to both almond farms and citrus orchards to witness large adoption of on-farm Ag-Tech in Modesto,” he said.

“I’ve already addressed and apologised for my administrative errors in regards to the Country Members Allowance in previous media statements.”

Whetstone added: “Whenever I have travelled I have always tried to reduce the amount of taxpayers’ money spent and this is exactly what happened here where for two nights of the trip I did not have to pay for accommodation.”

Further asked where he stayed on those two nights, he replied by SMS: “I spent two nights at my son’s home at no cost to the taxpayer.”

The travel report billed the US tour as being to “explore best practice in production, policy, regional development and connectivity relevant to the South Australian context”, to “discuss latest developments in ag-tech and agricultural innovation [and to] reinforce engagement and relationship with Napa Valley under the Great Wine Capitals Global Network”.

Among other expenses incurred were $1628 for a chauffeured limousine on a day in Texas and $229 for a set of Airpods purchased before departing Adelaide.

The Department of Primary Industries and Whetstone’s former ministerial office did not respond to questions about whether they were aware that his son was living in Modesto at the time of the visit, whether the former minister had attended any birthday celebrations while visiting, whether the trip had come at the recommendation of the agency and whether there was a process for justifying the location as a reasonable use of taxpayers’ money.