The scheme, which has been described as looking like “pork-barrelling” by Liberal insiders as well as the Labor Opposition, is revealed in party-room documents leaked to InDaily – a sign that internal tensions continue to simmer within Government ranks.

A Joint Party Paper dated March 2020 details a project – understood to have been dubbed “Project Wishlist” – which assesses infrastructure priorities in Liberal-held and “target seats”, to be unveiled in the weeks leading up the March 2022 election.

The call for submissions was driven by then-Speaker Tarzia, who was today sworn in as one of Steven Marshall’s three new ministers after the weekend resignations of Stephan Knoll, Tim Whetstone and David Ridgway after ongoing controversy over MPs’ entitlements.

A party source told InDaily Tarzia had taken charge of the scheme “on the basis that he’s a very good marginal seat campaigner”, having snatched the north-eastern suburbs seat of Hartley from Labor in 2014 and defended it against the high-profile incursion of Nick Xenophon in 2018.

However, the parliamentary Speaker’s role is traditionally kept at arm’s length from party politics.

“This paper is to notify Members that this process is beginning again.”

The paper, which it’s understood was provided to MPs on a USB, contains a now-dead link to an electronic form “which mirrors what was adopted during the last election”.

It provides a timeframe for the completion of submissions, which explicitly categorises “all incumbent seats” and “target seats (via pairs)”.

Wishlist submissions were due to undergo “initial early prioritisation work” from April to June, with “ongoing submissions reviewed” up until January 19 2022 – around two months before polling day.

The source said that once a submission is approved “it becomes an election commitment”. 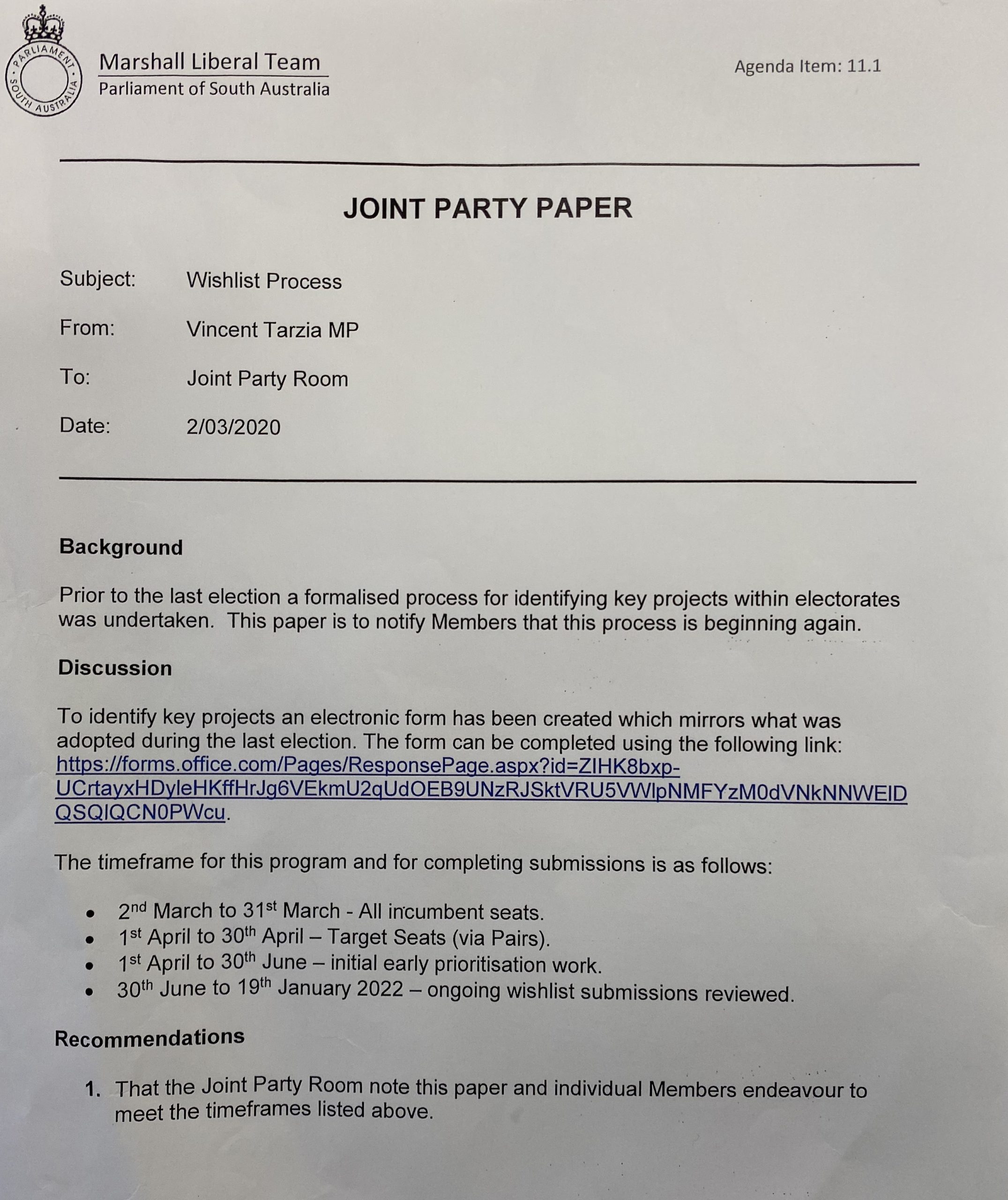 A printout of the paper sent electronically to all Liberal MPs.

Further leaked documents revealed last week by InDaily detailed the assignment of Legislative Councillors to drive the Liberal campaign in key electorates, with three MLCs given oversight of King, suggesting the party organisation is concerned about holding its most marginal seat.

One source told InDaily the type of submissions encouraged included “a new road, a roundabout, a playground”, suggesting the Government’s $20 million Golden Grove Road upgrade project may have been spawned by the previous “Wishlist” program.

They said the process was designed to provide a selling point for candidates in “winnable seats”, but noted that the Government itself had established Infrastructure SA, which was initially promised “to get rid of this ‘picking marginal-seat project’-type stuff”.

“This sort of thing should all be done within Infrastructure SA,” they said.

The same source questioned Tarzia’s involvement while he was Speaker.

InDaily sent Tarzia a series of questions, asking him to explain the purpose of the “Project Wishlist”, why it specifically categorises ‘target seats’, and whether it could be construed as pork-barrelling, as well as why he has taken responsibility for orchestrating the scheme given his role as Speaker.

His new ministerial adviser replied with a one-line response: “I assist all MPs, where possible, on matters that are important to them, regardless of their seat.”

InDaily also sought to ask him about the issue at a media conference this morning after his swearing-in, with a Government press secretary quickly stepping in to shut down further questions.

He said that “from time to time I’m approached to assist members of parliament and I try and do that as best I can”.

He denied it compromised his role as Speaker by appearing to interfere in party politics, saying: “No, I wouldn’t characterise it that way at all.”

But Opposition spokesman Tom Koutsantonis, when approached for comment by InDaily, said: “What’s the Speaker doing getting involved in partisan politics like this?”.

He said the Speaker should be seen to be “impartial and unbiased, not actively engaging in partisan politics”, arguing Labor’s last Speaker Michael Atkinson frequently absented himself from the party-room altogether.

Koutsantonis said the program as detailed appeared to be “pure pork-barrelling”, insisting the revelation “should make every South Australian very concerned about the Government spending our money on infrastructure devised in a purely partisan way”.

“The infrastructure process should be assessed on merit and need – not on the basis of what’s best for the Liberal party and marginal MPs,” he said.

Today’s revelations follow ongoing controversies about electioneering practices, after revelations before year’s federal election that the Morrison Government had favoured marginal and target seats for sports grants – a controversy kickstarted by the appearance of then-Mayo candidate Georgina Downer presenting a novelty cheque to the Yankalilla Bowling Club.

Last month, the State Opposition argued that the latest $6 million round of the Marshall Government’s Grassroots Football, Cricket and Netball Facility Program had issued grants in 12 seats, one of which was held by an independent and the rest Liberal-held.