Restrictions from late March and an exodus of city workers headed for home offices forced the closure of many city businesses while others scaled back hours and staff numbers.

A number of workers, students and other regular visitors are yet to fully resume their city routines, leading to a reduced spend across the CBD and North Adelaide.

According to the council’s ‘people counter data’ the number of people coming into the city each day is still down 25-30 per cent on pre-COVID levels despite significant easing of restrictions in recent weeks and programs to lure them back.

It said this was partly due to several large organisations including the ATO and Bank SA/Westpac still having more than half of their staff working remotely.

The call to appoint a single economic agency to manage marketing and economic growth in the city has been led by Adelaide Business Collective – a not-for-profit group whose membership is comprised of almost 200 city businesses.

The process has so far been two years in the making and began as a way to combat the rise of online shopping and expanding suburban shopping hubs.

He said having the city operate as one across all its precincts could be thought of as like a huge shopping centre with co-ordinated marketing, events and business development.

This Business Improvement District model had proven very successful in many parts of the world with Auckland’s Heart of the City group an excellent example, he said.

“The suburban main streets and suburban shopping centres have benefitted from people working from home so having that workforce coming back to the city is certainly going to make a difference,” West said.

“It is essential that as we begin to get back on our feet we bring everybody together to promote the city as a total offering and lift the profile.

“The city has got such a fabulous diverse offer so if we can get Her Majesty’s Theatre and the Rundle Mall retailers, the zoo, the restaurants in Gouger Street and the fashion stores in Rundle Street all working together it’s very powerful as opposed to just one of the precincts doing something.” 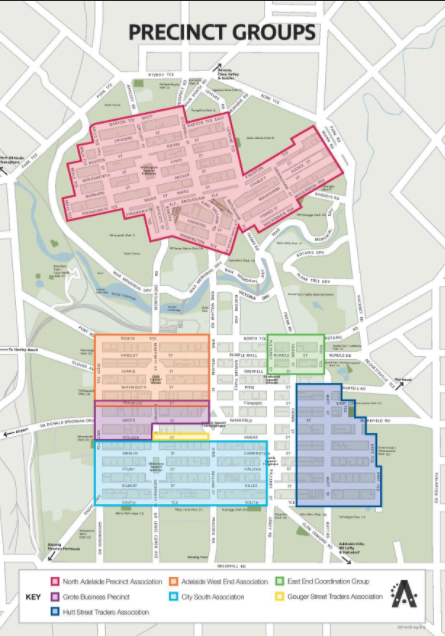 The current city precincts could be subject to change under the proposed city-wide business model.

There are eight not-for-profit precinct groups and traders associations in the city, not including the Rundle Mall Management Authority and Central Market Authority.

The council will next month decide if it will create a new subsidiary or implement the new model through an expanded Rundle Mall Management Authority, a semi-autonomous subsidiary it created in 2008.

It will also start holding information sessions on the plan this week.

Adelaide West End Association president Andrew Wallace said the Adelaide Business Collective proposal of five local delivery areas fed by a central group would likely be funded by a separate council rate or a hived off portion of the general rate.

He said the two-year process built on work done previously by his group in conjunction with the East End Co-ordination Group four years ago.

“The difference this time around is actually looking at a city-wide version of a city improvement district where business makes a decision itself about what it wants to do and then it finds a way of funding that,” Wallace said.

Under the current city precinct structure, there are a high concentration of groups in the streets surrounding the Central Market while other parts of the CBD, such as Pirie and Wakefield streets are not represented at all.

The council aims to finalise the process by the end of the year including the appointment of board members with the new subsidiary formally commencing in January.

Wallace said COVID-19 had brought the need for a city-wide model into “really sharp focus”.

“Now we’ve got a challenge we weren’t expecting to have two years ago,” he said.

“Back then we were talking about the impact of the online retail environment and the competition with suburban retail but we weren’t talking about anything as severe as what has happened during COVID and the things it has highlighted such as where people might prefer to work and where they might prefer to shop.

“There is a degree of urgency to get this moving because it’s been four years but we don’t want to rush into the wrong model – that would be a disaster.”

Wallace said the drop off in commercial activity in the city he had seen had been largely matched by an increase in the suburbs.

“There’s an anxiety about people coming back into the city, they’ve become very comfortable working from home and we can expect to see a higher percentage of city workers spending a day or two at home as we move forward,” he said.

“That has an effect on a whole range of things from vacant office space through to the businesses that sell them sandwiches and coffee – city businesses rely heavily on city workers.

“We need to develop a compelling reason for people to come into the city because it’s really important that our ground floor spaces are active and full of things that appeal both to city workers and to tourists.”

City of Adelaide associate director of economic development and sustainability Michelle English said the council had been actively supporting the business community during the COVID-19 pandemic and recovery through a range of initiatives including rent relief to tenants in council-owned buildings and reducing park lands fees for sporting clubs and community groups.

She said it was also working with the state government to provide paid opportunities for local musicians to play every Friday lunchtime in various spots throughout the city and North Adelaide, while supporting businesses by encouraging people to reconnect with the city.

“Residents and visitors to the city will also enjoy cheaper access to council assets including parking bays after council resolved to freeze most of its fees and charges for the next 12 months,” English said.

“The City of Adelaide will also continue to support traders through its #MyAdelaide campaign, which is encouraging people back into the city with initiatives such as providing outdoor heaters and lighting to cafes and restaurants to enable more outdoor dining.”

English said the purpose of the City Wide Business Model and associated subsidiary was to “drive the economic growth of the city through investment attraction, supporting business growth, marketing the city and driving the visitor economy”.