Shadow Human Services Minister Nat Cook told InDaily she is drafting legislation to outlaw the controversial practice of LGBTIQ conversion therapy that seeks to change, alter or supress a person’s sexual orientation or gender identity through counselling or surgery.

It follows similar moves by the Victorian, Queensland and ACT parliaments.

The proposal has in-principle support from the Greens, while Attorney-General Vickie Chapman says she has already considered how a ban could operate as a criminal offence.

Cook said penalties would be similar to those for existing criminal offences such as recklessly causing harm, which carries a maximum sentence of eight years imprisonment.

Higher penalties would be set for those who perform conversion therapy on children or vulnerable adults, but gender transition services for people who identify as transgender would be exempt.

Cook said Labor would decide whether the draft legislation would be subject to a conscience or party vote next week, with a Bill to be introduced to either the upper or lower house “as soon as possible” – likely after the winter break, which starts in a fortnight.

The former health care worker said she had heard from “dozens” of LGBTIQ people who said they had endured therapies that left “terrible, damaging long-term consequences”.

“I think this is a situation where people would be blissfully unaware that this was actually an issue and clearly in a society where we expect and insist on equality and inclusion there should be no notion that this type of therapy is even considered,” she said.

“To think that there are people out there that would be wilfully and deliberately harming people purely on the basis of their sexuality and gender is something which I find completely unacceptable and I don’t think it passes any type of test in this community.”

InDaily last year spoke to several people who said they had endured LGBTIQ conversion therapy in South Australia from the 1990s.

One said he signed up to a 12-step gay conversion program in Adelaide in 1995 after being told by his church that he needed to “deal with his homosexuality” to participate in church life.

But he said the six-year program of quasi-intensive counselling left him feeling “frustrated”.

“There were a lot of things seen as behaviour modifications that I was trying to persevere with… but I couldn’t reconcile my faith with my sexuality,” he said.

“But I just saw myself as always falling into temptation, and giving into these temptations, just sinning in a way.”

Another person told InDaily she spent two months trying to “pray” her mental health issues away – spurred on by her coming to grips with her sexuality in her twenties – at a religious rehabilitation program.

“As part of rehab… it was very much ‘you’re not allowed to be gay – that’s what you’ve got prayer for and counselling sessions’,” she said.

According to a 2018 Human Rights Law Centre report, up to 10 per cent of LGBTIQ Australians are still vulnerable to “harmful” conversion therapy practices, which emerged in Australian conservative Christian communities in the 1970s.

The report states modern conversion practices involve counselling, prayer or group sessions, but clinical interventions such as surgery, hormone injections and behavioural and psychoanalytic therapies have also been used in the past to try to “convert” people to heterosexuality.

“Rather than receding, our research suggests that conversion practices and ideologies are being mainstreamed within particular Christian churches,” the report states.

“Ex-gay and ex-trans ideology, counselling and pastoral activities are still being promoted in the messages and teachings of many churches, mosques and synagogues, through print and digital media and through some Christian radio programmes.”

According to the report: “Psychological research has produced overwhelming clinical evidence that practices aimed at the reorientation of LGBT people do not work and are both harmful and unethical.

“Conversion activities can constitute torture or cruel, inhuman and degrading treatment, particularly when they are administered through force or to children.”

Chapman said she had sought advice to determine how a conversion therapy ban would operate in South Australia, including whether it could be classified as a criminal offence.

“This practice has not yet been identified as operating in South Australia but change will still be considered,” she said.

“Conversion therapy is an outdated, ineffective and inappropriate practice.”

Cook said most of her Labor Party colleagues expressed support for her draft legislation.

She said once legislation has been finalised, formal submissions would be sought from stakeholders and wider community.

Greens MLC Tammy Franks said her party supported the principle of banning conversion therapy “wholeheartedly and strongly”, but it would wait to review the draft legislation and hear from stakeholders before offering full support.

“I don’t think many people in the parliament would actually say that they outwardly support gay conversion therapy; it’s just a debate around the matter of how you make that enforceable by law,” she said. 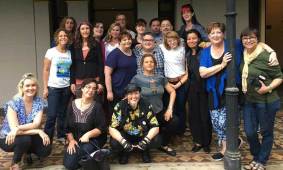 The no longer silent 'i' in LGBTIQ

Equality Australia welcomed the move to tackle conversion therapy in South Australia, describing the practice as “dangerous”, but CEO Anna Brown said it was “vital” that legislation was developed in consultation with survivors and members of the LGBTIQ community.

“The conversion movement’s activities are proven to be ineffective and harmful,” she said.

“Telling someone they are broken or sick because of who they are is profoundly psychologically damaging.”