Welfare recipients took to social media over the past week concerned “a glitch with the system” was causing incomes to appear as doubled when they were trying to advise Services Australia (formerly the Department of Human Services) of tax return non-lodgement.

It follows a similar Centrelink glitch at the end of the 2019 financial year which alleged families who’d received the Childcare Subsidy payment had been overpaid. 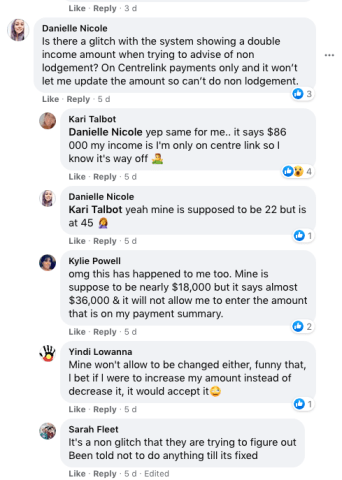 Welfare recipients use the Services Australia Facebook page to try and get answers to their questions.

On Monday afternoon, Services Australia claimed through a Facebook message to have “fixed the display issue” which showed payments as double – but hours later welfare recipient Mel Osborne told InDaily it appeared the issue had not been resolved.

Instead, she continued to receive an error message advising her the taxable income amount she provided was less than the taxable payment Centrelink made during the 2019-20 financial year.

Family Tax Benefit and Child Care Subsidy recipients are obliged to complete the non-lodgement forms through Centrelink’s online portal – MyGov – at the end of each financial year to advise the Australian Tax Office they will not be lodging a tax return. 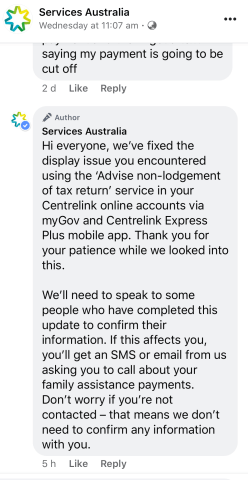 Osborne said she first noticed the glitch on the first day of the new financial year when she tried to input the taxable income earned between July 1, 2019 and June 30, 2020.

“I tried it again on Thursday afternoon and then I rang Centrelink and Centrelink said they couldn’t see any problems on the page, that it should all go through and that I should contact the ATO,” Osborne said.

“They (the ATO) put through a non-lodgement for me on their side … but I have to do it through the Centrelink app as well otherwise it won’t go through properly.”

Osborne said she was told by the ATO the department for social services needed fix the problem on their end.

“I did so and then I tried it again Friday afternoon and it’s still saying double the amount that’s on my (payment) summary,” Osborne said.

She said she called Centrelink again on Friday and was told the issue would resolve itself within seven business days – “and if not then try and contact them again.”

Yesterday morning, Services Australia said it had resolved the non-lodgement of tax return issue in response to concerns on its Facebook page.

However, hours later, Osborne’s form was still not accepted and she was told to, once again, contact the ATO. 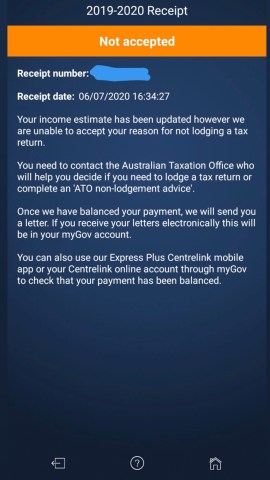 Osborne received a message advising her to contact the ATO again.

A spokesperson for the department on Tuesday told InDaily it had “put in a fix for people encountering a display issue” over the weekend.

“We’ll need to speak to some people who have completed this update to confirm the income details they submitted were correct,” Jongen said.

“Some people will now be able to correct the income amount themselves online.

“If people are unable to correct the income amount themselves or are concerned about their update, we encourage them to call our families line on 136 150.”

The Adelaide-based welfare advocate said she had been flooded with hundreds of queries in the past week from stressed parents concerned about the potential long-term impacts of Centrelink’s pre-filled system.

“It’s causing a lot of stress. A lot of people are spending hours and days upon days trying to fix it and they’re just getting told to call a different department, no call this department, no we don’t have anything to do with that,” Mercer said.

“This is the kind of stuff where robo-debt started.

“It seems to be every year there is an issue relating this kind of stuff … Last year we had a major issue with the childcare supplement not being balanced and there are still some that haven’t been balanced to this day from the last financial year.

After the last financial year thousands of families across Australia were hit with childcare subsidy debts when an alleged Centrelink glitch overestimated their income.

It was later conceded the debts were incorrect.