The pandemic has seen Adelaidians increasingly turn to their cars for their daily transit needs, whether for commuting to work, going to the shops, drive-through medical check ups, or even drive-in footy screenings.

Before the virus, Adelaide was already the most car-centric state capital in Australia with nearly 80 per cent of locals driving to work, according to the last national census in 2016.

That preference for getting behind the wheel has only increased since the pandemic began.

Although Apple Maps data indicates car travel in Adelaide dropped by up to 60 per cent at the height of the crisis in early April, public transport fell even further, by 80 per cent.

Trips by car have recovered to 12 per cent below pre-pandemic levels as of June 24, but public transport is still down 25 per cent, and walking by 32 per cent.

The collapse in demand comes as public transport undergoes a radical shake-up, including plans to remove almost 700 seats from trains to facilitate social distancing.

This week it was revealed that the State Government is proposing to axe nearly 1000 bus stops around the city in exchange for more frequent service along key routes.

“There’s a danger of a gradual scaling down through COVID-19,” he told InDaily.

“The State Government will say it is demand response: if no-one sitting on buses, why provide that service?”

He warns that public transport was already running at “crush capacity” during peak hours prior to the pandemic, so social distancing measures will reduce the number of people able to take up that option even if they want to.

Concerned that this will lead to increased carbon emissions from car travel, Allan suggests a range of measures to restore confidence in public transport, from better ventilation systems on public transport to the linking of contact tracing apps with public transport cards, to encouraging use of masks and gloves during spikes in community transmission. 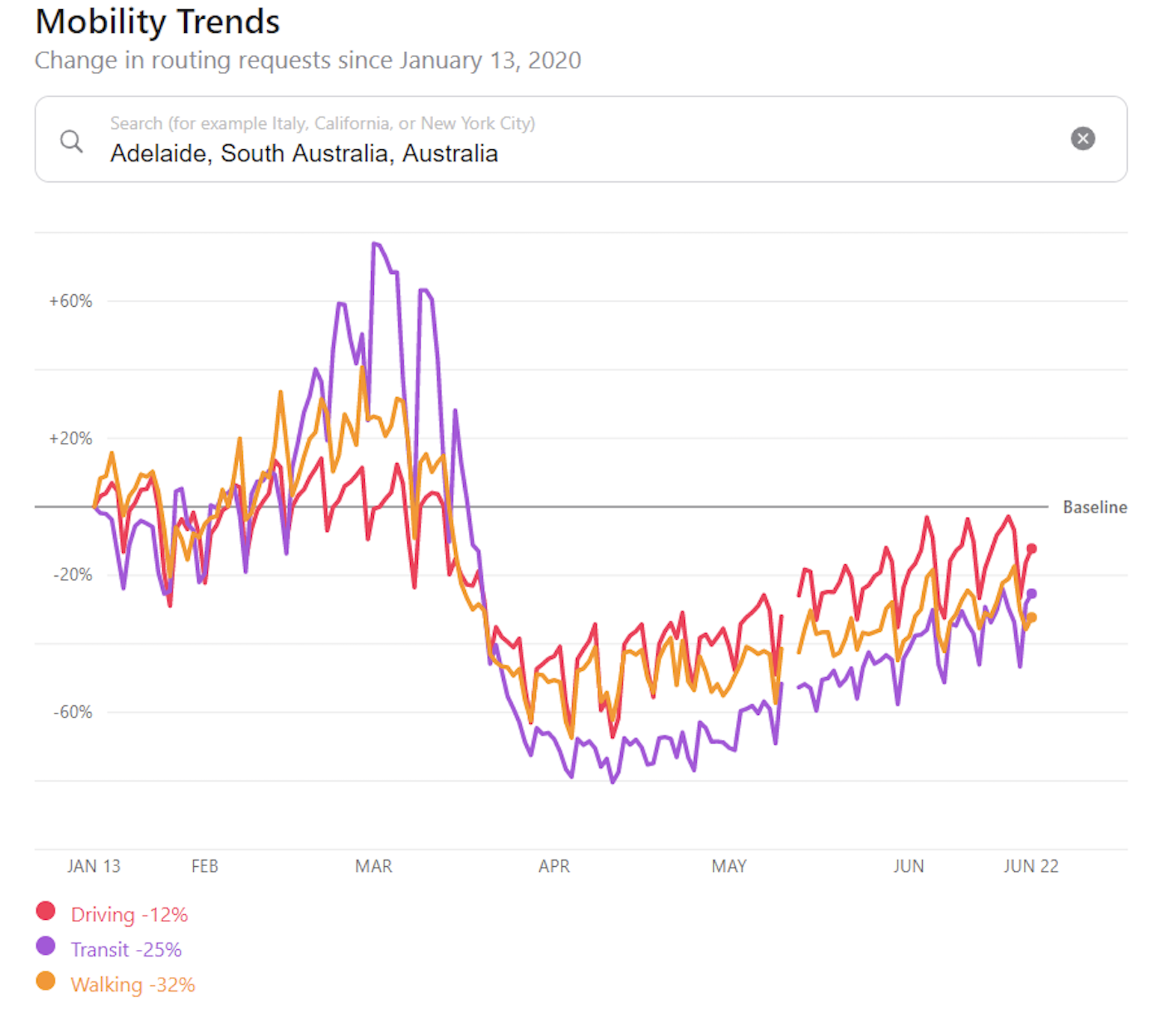 University of Melbourne urban planning expert Dr John Stone suggested that the State Government plan to increase the frequency of buses on key routes could be helpful, with commuters seeking faster and more direct connections.

He is undertaking research about the impact of reduced public transport due to COVID-19 on congestion in Australian cities.

“If you have even a small proportion of commuters moving from public transport to cars, that means increased road congestion and quickly gets you into trouble,” he says.

Verschoor told InDaily that the council is responding to changing travel needs during the pandemic by supporting all forms of commuting, including cycling and public transport, but cited an incentive to drive as the only example.

“As part of our planned response to protect the health and wellbeing of our community, we quickly delivered UPark Plus – safer touch-free parking, with discounted pricing at all UParks,” she said.

Cycling has also boomed across the country during the shutdown, including in Adelaide.

Data from the City of Charles Sturt indicates that cycling increased 200 per cent along the River Torrens Linear Park Trail, from 800 riders per day in April 2019 to over 1600 daily riders in April this year.

Allan recommends increasing the number of cycle paths to further encourage this, and for more workplaces to provide secure parking for bikes.

Longer term, he says the key to weaning residents off cars is continuing the trend for greater population density in the inner city, and moving more jobs into suburban areas.

Just as people are forming new habits in preferencing car journeys over public transport, urban planning experts also anticipate that more people will continue to work from home by choice beyond the pandemic.

Even a modest number of people doing so would reduce pressure on roads at peak transit times.

Peter Ciemitis, urban designer at RobertsDay, believes it could see the neighbourhood centre experience a resurgence and divert people away from the CBD.

“If we see long-term work from home practices remaining in place, these reposition the role of the local centre in delivering business support, food and beverage options, business accommodation, and entertainment and cultural options,” he said.

Allan warns that such changes need direction, however.

“If we don’t have policy signals to reinstall confidence, we are likely to end up with a norm that is more car-dependent,” he said.