It comes as his state today recorded 21 new coronavirus cases in a single day, the biggest increase in more than a month.

Mikakos said two of the remaining six new cases were linked to known outbreaks while the others were detected through routine testing.

South Australia has already committed to reopening all state borders on July 20 – which would allow an immediate influx of travellers from Victoria and New South Wales, neither of which have current border controls.

The move is unlikely to spark an influx of tourism, given all three jurisdictions have committed to maintaining their own border controls for new and returning travellers, while direct Jetstar flights from Hobart have been suspended since March.

But the July 20 deadline means the eastern border will, remain effectively closed – with arrivals told to self-isolate for two weeks – until after the July school holidays.

Asked about this today, Andrews – under fire over branch stacking allegations in the Victorian ALP – told reporters: “I don’t want to be offensive to South Australians, but why would you want to go there?”

“Why would you want to go there? Holiday here,” he said.

“Victorians I think will be very keen to stay close to home these school holidays, over this period [and] I welcome that, because every dollar we can invest as local tourists will be good for jobs.”

He told Victorians: “Don’t get too distressed that they won’t let you in to Adelaide – why would you really want to go there?”

Asked about Victorian residents being unable to visit family in SA, Andrews said: “They need to speak to the SA Government about the decision they’ve made – I can’t control that.”

He said he was not critical of SA’s moves to safeguard its borders, but said “we’re a different place”.

In response, Marshall posted a video on his Facebook page promoting SA tourism – despite eastern states tourists being unable to holiday here until late July. 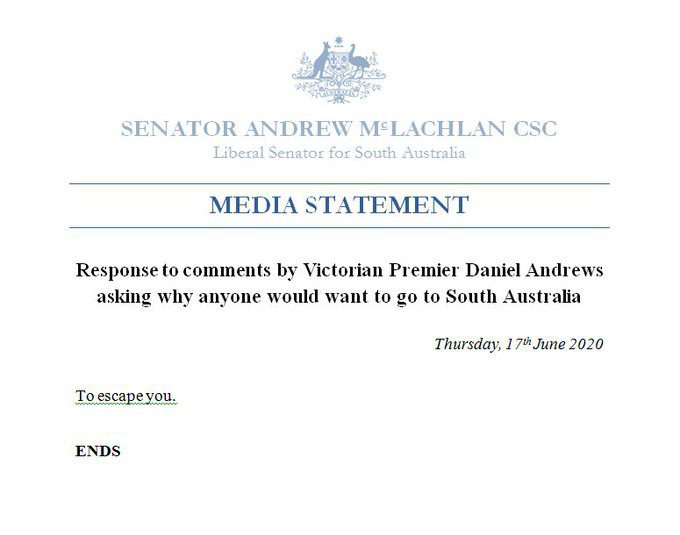 Marshall later told reporters: “It seems Dan Andrews has got his hands full at the moment”, arguing his comments were a “bit of a cheap shot to create a political diversion”.

Marshall insisted there had and would be “a huge number of people coming in to our state” and Victorians would “always be very welcome here”.

“We’ll lift our restrictions with other jurisdictions as and when they get their house on order,” he said.

The border issue remains a political and economic headache for the Marshall Government, with none of the jurisdictions now targeted for interstate travel reciprocating the move, and WA Premier Mark McGowan warning his government had received Commonwealth advice that such a move would breach the constitution.

“It’s unconstitutional to pick and choose between the states, so we’d be breaking the law were we to try and do an arrangement with South Australia or the Northern Territory,” he told reporters in Perth yesterday.

NT Chief Minister Michael Gunner said his government would stick to its original timetable with a review of state borders by the end of this week, while Tasmanian Premier Peter Gutwein maintained he still expected to lift border restrictions towards the end of July, “all things going well”, with a decision to be announced on June 26.

“Until then our focus remains on a gradual easing of our broader restrictions to ensure we’re well placed to manage any risk associated with coronavirus,” Gutwein said.

NSW recorded just one new COVID-19 case in the 24 hours to 8pm yesterday, which involved an overseas traveller in hotel quarantine after 12,000 tests were carried out.

“None of this makes sense to me,” Berejiklian said today of SA’s border changes.

“Yes, we comprise a number of states and each premier has led their state in a different way or (taken) a different approach, but that’s no reason to have internal borders … I can’t see the logic in it. I think it’s crazy.”

But Marshall insisted his reduced border restrictions would see an influx of travellers, arguing “the grey nomads [in WA and NT] are hitching up their caravans as we speak”, suggesting holidaymakers could then travel on to the eastern states whose borders remain open.