Or at least, the place he’s called home for the last three months, since he and his family – wife Emily and young boys Jack and Fred – resettled in the UK as Avery began his stint as network correspondent.

He’s just finished an unforeseen round of crosses and interviews back to Australia after ending up the centre of an international controversy, as angry crowds at the Black Lives Matter protest he was covering turned on him, his cameraman Cade Thompson and the security guard the network had hired to watch their back.

It happened during their 5.30am cross to the Today Show – by midday a clip of the incident posted on social media had been viewed around half a million times.

#BREAKING: Nine News Europe Correspondent @benavery9 has had to abandon his coverage as protesters clash with police in London. #9News pic.twitter.com/xL3x7ACdvj

The former SA Journalist of the Year, who hails from Loxton, has covered plenty of big events, including the 2018 Thai cave rescue – but admits as a reporter he has never felt as physically threatened as this morning.

“I just knew we were the flame and they were the moths – they were just coming at us,” he says now.

Bizarrely, Avery had stepped in to cover the protests – inspired by similar shows of defiance in the US after the death of George Floyd, allegedly murdered by sacked police officer Derek Chauvin – after his fellow correspondent Sophie Walsh was also assaulted live on air earlier in the day.

It also came just days after another Australian TV journalist and cameraman were assaulted by US police while covering a protest near the White House in which demonstrators were fired upon with teargas and rubber bullets.

In London last night, Walsh was also crossing live to Australia as she was set upon – indeed, to the Adelaide bulletin of which Avery was a central fixture until a few months ago. 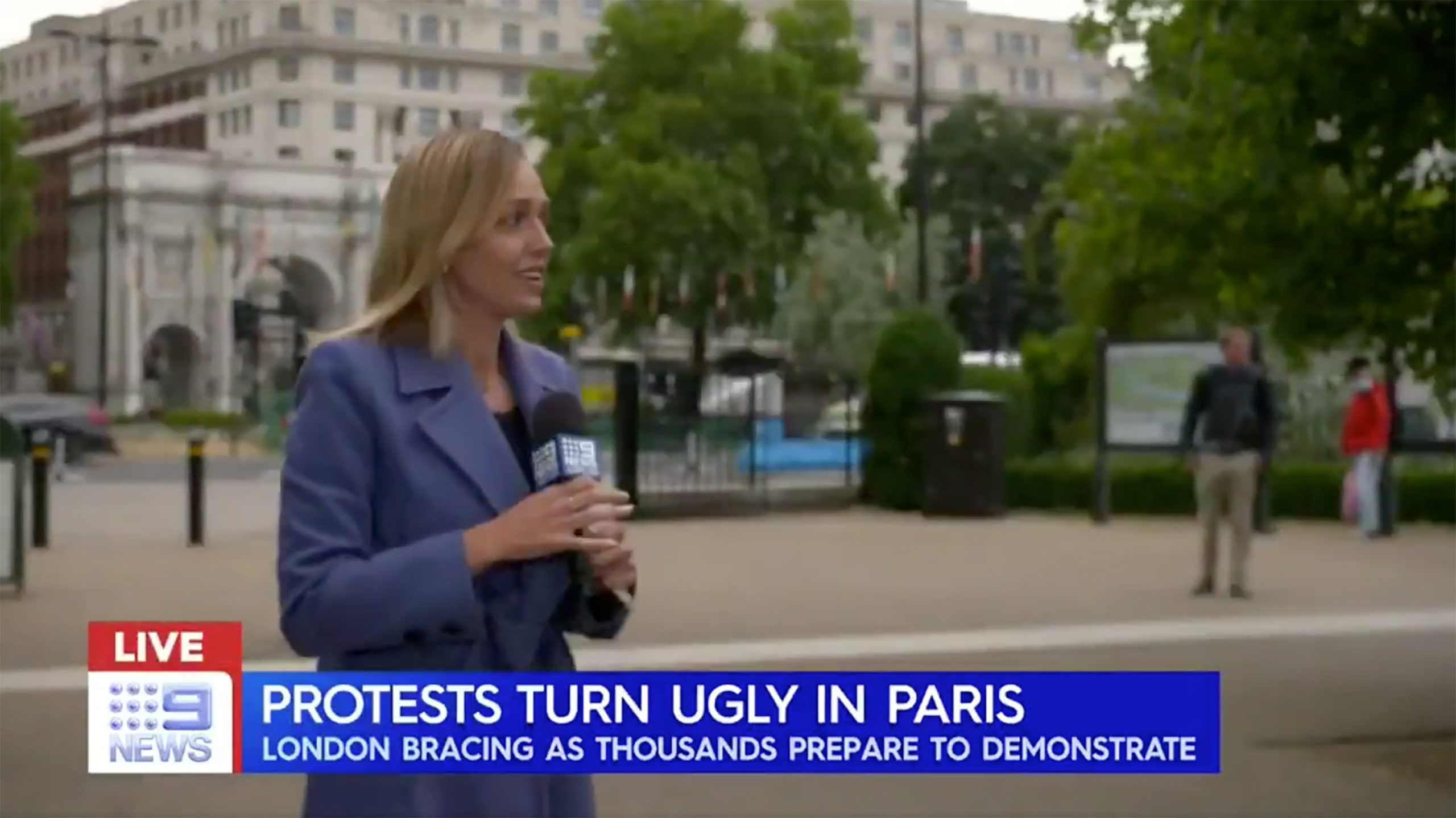 Sophie Walsh on air moments after the incident. Photo: AAP, Supplied by 9

Walsh was in a relatively empty Hyde Park, previewing the protest, when a man grabbed her, made stabbing motions and shouted “Allahu Akbar”.

“This random guy grabbed me from behind … he started punching me, the only way I can describe it is sort of stabby motions,” Walsh has told Nine.

“He had a hand in his pocket. I thought: ‘Does he have a knife and will he start stabbing us all?’.”

While Walsh was on air, the network was rolling overlay vision at the time of the assault, with her screams alerting the Adelaide presenters to her plight.

“I don’t think anyone knows the sound of their true scream until they’re in a situation like that where they feel like it’s a life or death scenario,” she said.

She praised her camera operator Jason Conduit, who armed himself with a light stand, chased the man and detained him until police arrived, when officers found him carrying a screwdriver. He’s been charged with threatening to kill and possessing an offensive weapon.

Unlike Walsh, Avery knew well before he was on air that things were turning nasty.

“The protest started about 1pm local time,” he told InDaily.

“More people than expected came – tens of thousands more – but there wasn’t too much trouble… it was a loud and enthusiastic crowd, but mostly peaceful.

“They spread out onto the street and the police let them do that.”

The crowd started assembling beneath the statue of Churchill near the doorstep of the UK parliament, but Avery says it had mostly dispersed by around 6pm local time – with a few agitators staying on. 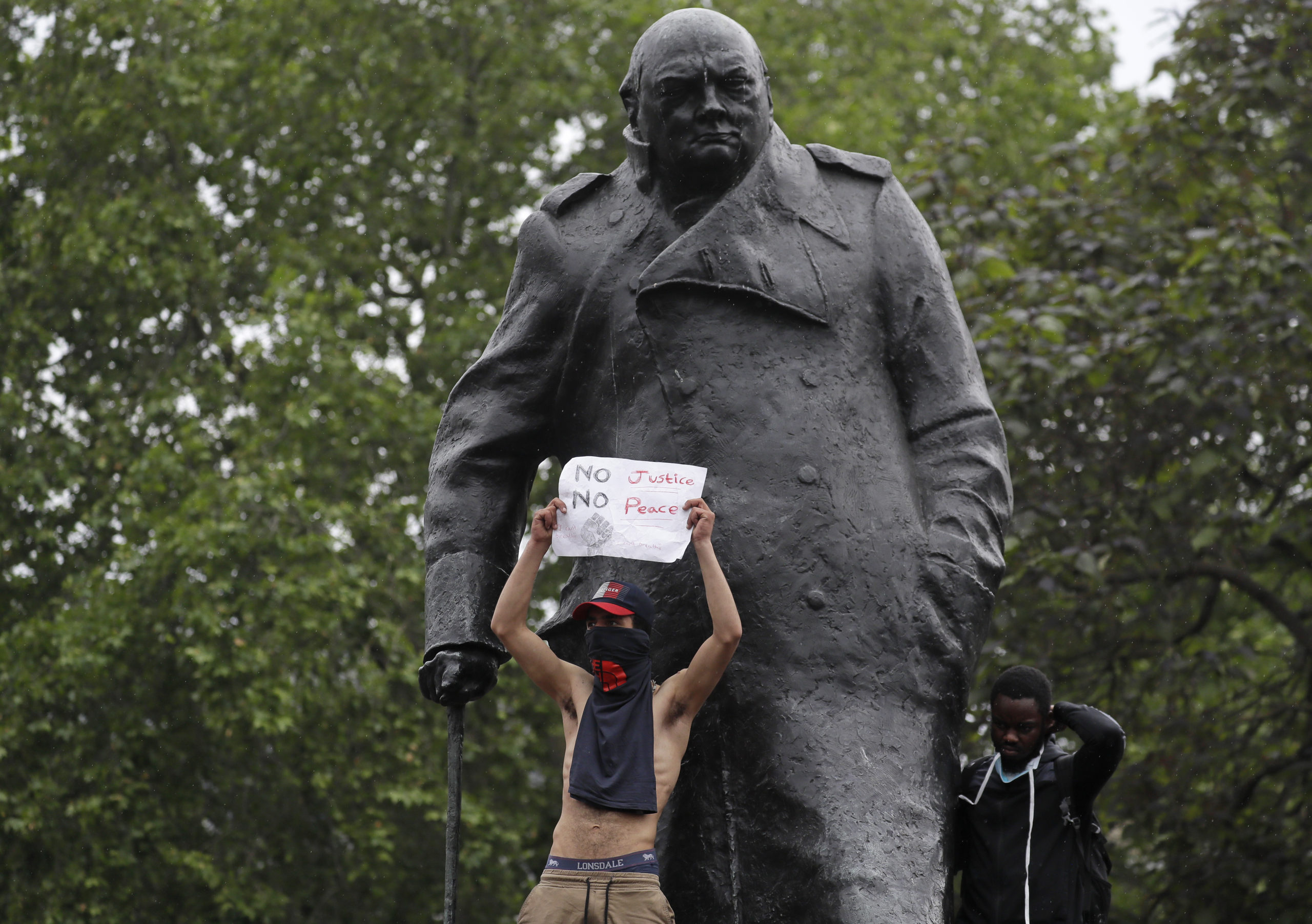 “A small percentage of the crowd was intent on having a go at police – charging at them a few times, throwing bottles at them… a young female police officer was surrounded by protesters having a go at her,” he recalls.

“I don’t know what it was over, whether they were just troublemakers trying to cause a stir.”

A short time later he and 9’s cameraman Cade Thompson set up for their 5am (Australian) live cross, “and our security guard Patrick rolled up just in time”.

“There were two to three people that were having a bit of a go at us, which isn’t unusual as you know in a crowd that big, you’ve always got a couple that are anti-media for some reason.”

After the 5am cross, Avery told Thompson “for our next one we should go to the other side of the road”.

“There was other media around, but not enough to share the load, [so] I felt we had a bit of a target on our backs… but the trouble followed us.”

Avery was still nervous in the minutes leading up to the next studio cross, “but I wasn’t expecting what was going to happen”.

They had situated themselves at the opening of a small tunnel.

“I think that was probably strategic to have that tunnel there as a way to get out – and as it turned out that was what we did,” he reflects.

“We were initially further out on the road because things were ok.”

The crowd had “completely blocked off that road”, he says.

“There were other people trying to get home, with Porsches and Mercs all getting blocked off by the crowd… my plan was to mention that and pan off to those cars [so] we were standing there, and a couple of minutes before the cross these guys started to arc up a bit – they really started to fire up…

“A few seconds before the cross happened, someone grabbed the cameraman’s camera and pulled it down – you can see that on air… then they started approaching from behind.

“I made an attempt to keep doing the cross till someone stole my microphone and took off. I initially tried to chase him down and get it back but then realised the microphone was probably the least of our worries…

“My cameramen kept getting kind of attacked, people pulling his camera down.”

“I got hit by a bottle at one stage [but] I think it was a plastic bottle because it just bounced off,” he says.

“I just knew we were the flame and they were the moths – they were just coming at us [and] I didn’t know how we should act in that situation, I didn’t want to cause a big ruckus and give the police more problems – they already had enough.”

The pair, followed by Patrick, ran to parliament house, where they knew a larger police contingent was stationed.

“Our concern was for our security guard, who had 15 or 16 people around him – he was fighting them all off [but] he managed to get away,” Avery says.

“We all ended up right up against the fence and the cops formed a shield around us… [there were] 50 or 60 angry people trying to get at us, but luckily we had that police shield around us.”

After around five minutes, “a guy came up with the microphone”.

“I thought he was going to give it back, but then I realised it was likely the same guy who took it and he just wanted to show off the fact he kept it.”

Patrick again stepped in to try and retrieve the microphone, which set off “a fair old scuffle”.

“The cops brought the security guard back in and we stayed there and waited until something happened at [nearby] Downing Street – I don’t know what happened – and all the protesters took off in that direction,” Avery recalls.

“And the police, who were really, really good and helpful to us, said, ‘Now’s the time we get you to your car and you take off’.”

Avery enthuses about the efforts of the security guard – a professional boxer.

“We were really lucky we had someone of that calibre [who] didn’t take a backwards step,” he says.

“At one stage he was taking on about 15 blokes by himself, and came out unscathed – and he rang us later to ask how we were going.” 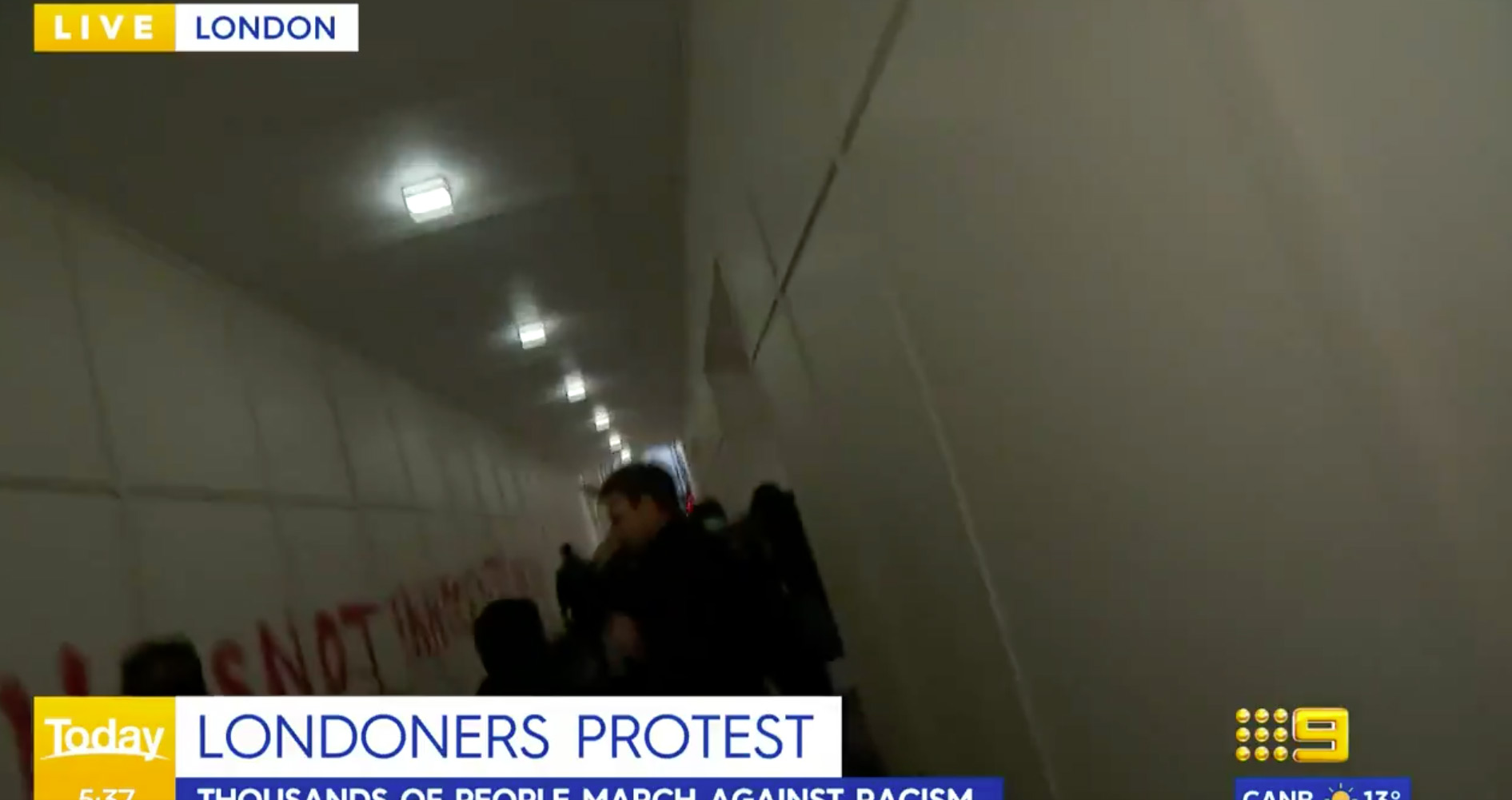 A man scuffles with Avery before taking his microphone.

Avery has been quick to emphasise that while the incidents involving both he and Walsh will garner attention, they are not representative of the protest overall.

Asked during a later Today Show interview by presenter Karl Stefanovic whether the attack “summed up the mood in London”, he replied: “I don’t think it does, actually… that protest started at 1pm and they were getting their message across without any kind of aggro.” 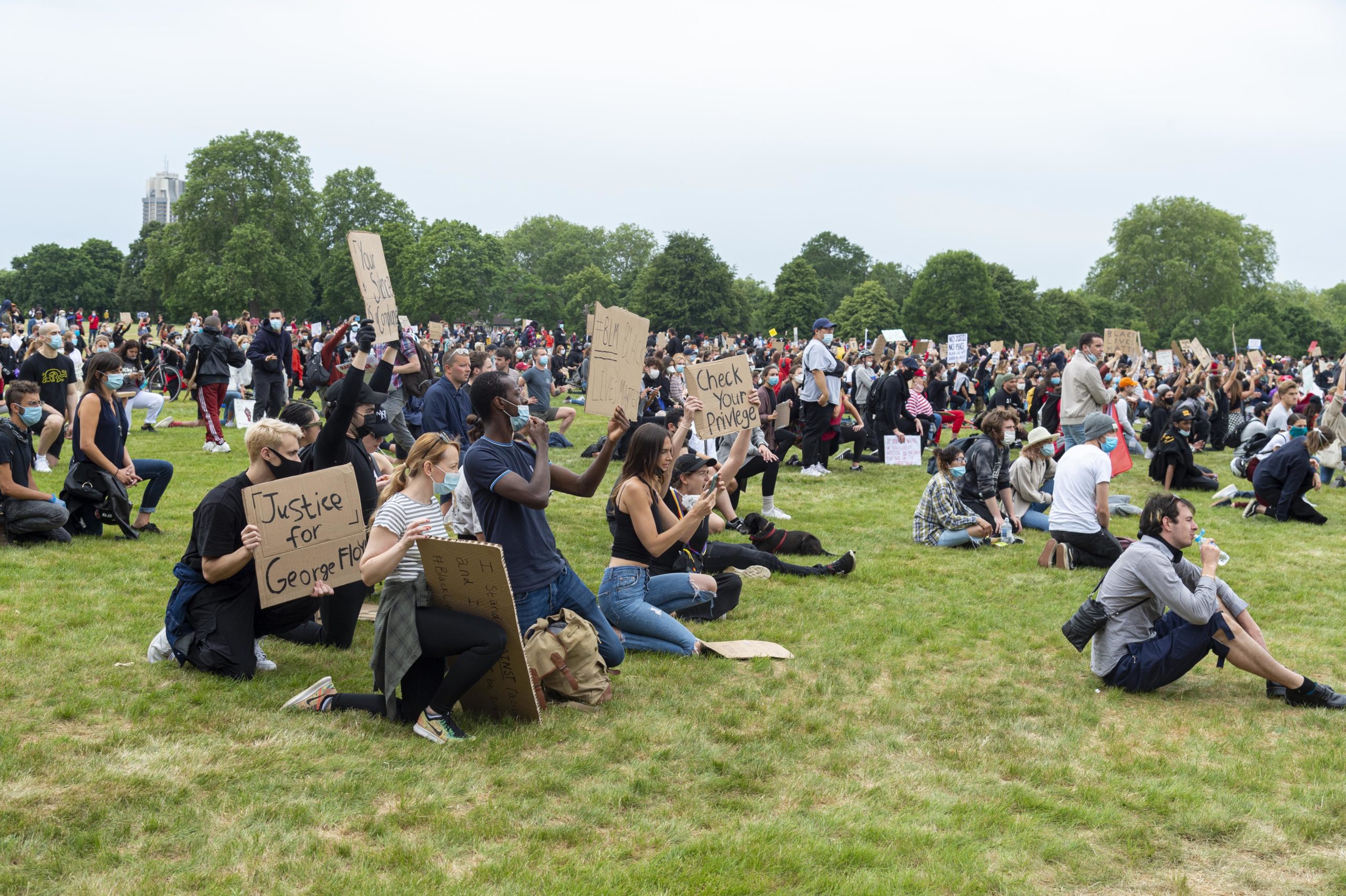 However, he told InDaily the US-inspired protests had particular resonance in the UK, with the crowds referencing the case of 29-year-old Mark Duggan, who was shot and killed by police in Tottenham in 2011, and the recent case of Belly Mujinga, 47, a railway ticket office worker who died with coronavirus after being spat on by a man who claimed he had COVID-19.

“There are definitely local connections… it’s a US issue that resonated in the UK,” he says.

London, like the US, has also had the powder-keg scenario of resentment building up from the Coronavirus-enforced lockdown.

“I think it’s definitely a factor, but how much of a factor I can’t really be sure, having not really lived here that long… but I have to admit to being surprised at how a country that’s been in lockdown now for three months, with extremely strict rules about how many people to see and some year levels haven’t even returned to school… and you get a protest of tens of thousands of people and they’re all spaced less than half a metre apart,” he says.

“But I don’t really know what effect that would have played as part of the frustration that’s built up.”

The lockdown has loomed large since Avery alighted in London in February. 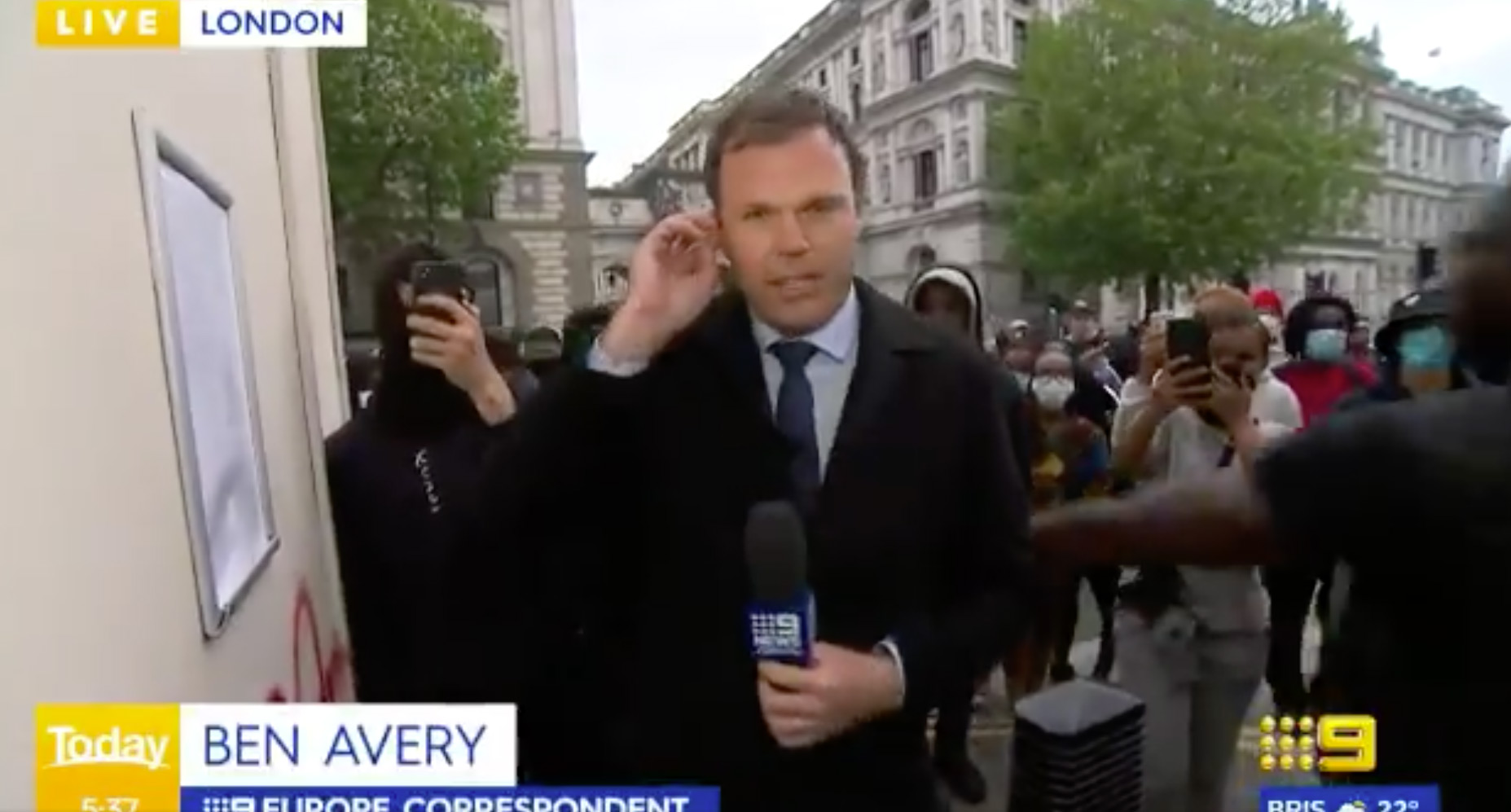 His first assignment was in Milan “when [COVID-19] was first hitting Europe”.

“The word ‘lockdown’ was quite strange to hear… and at that point even in Australia we were talking about coronavirus but certainly not in the same serious way we do now,” he recalls.

“We were back in London within 48 hours and went into quarantine for a week or so… I think it was by the time we’d come out of that week-long quarantine they started to get a few deaths [but] Boris Johnson initially wanted to keep everything open.

“Then within 24 hours we realised our time in London was going to change significantly. They were going to shut the whole city down.”

His oldest son Jack was due to start school for the first time, but was sent home after just two weeks of term. 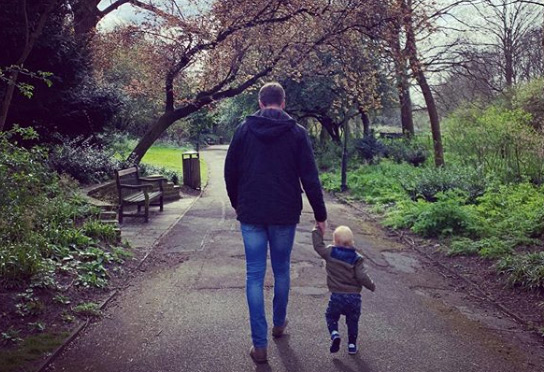 Avery with his younger son Fred in Fulham. Photo: Instagram

“His age group is now allowed to go back as of Monday, but his school made an independent decision they can’t keep kids that age apart, so he can’t go back any time soon,” Avery says, conceding: “It hasn’t been what we were expecting.”

“We arrived here pretty much at the start of coronavirus arriving, and the next big story is this big global story about George Floyd,” he says.

And all of a sudden, he’s found himself right in the thick of it.