Goodlife and Anytime Fitness were among a number of South Australian gyms which reopened their doors this week, in line with stage two of the State Government’s coronavirus rules.

Under the State’s coronavirus restriction easing guidelines, from June 1, gyms have been allowed a maximum of 10 people per class and 20 per room, with up to 80 people during staffed hours.

Social distancing and hygiene rules must still be followed.

The restrictions have led Goodlife and Anytime Fitness to introduce online booking systems which allow members to reserve a time at the gym before a workout.

However gym members have taken to Facebook to complain about being charged fees when they have been unable to book a time to attend the gym. 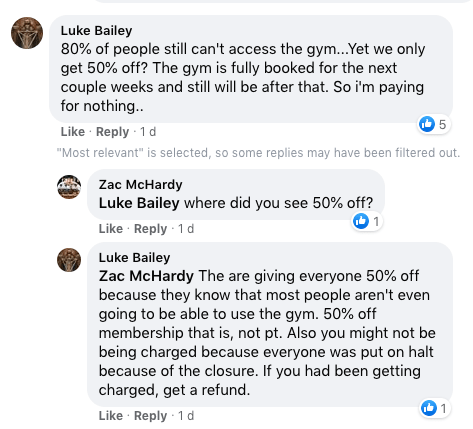 Goodlife members have taken to Facebook to voice their concerns over gym charges.

In response to InDaily’s questions about the charges, a spokesperson for Anytime Fitness said: “Our club capacities are set by the state government and of course, we must adhere to these for the safety of our members and staff.”

“The introduction of the booking system helps our members ensure that they will have access to their club,” the spokesperson said.

“Our members have been contacted directly via email in relation to current restrictions and billing. At this time, our members have not been billed since reopening, and our clubs are working with members on a local level to support them through the challenging times.”

The spokesperson said Anytime Fitness was due to resume billing in South Australia on Friday.

They said members could choose to continue to freeze their memberships by contacting their individual club.

Meanwhile Goodlife has come under fire from members who said they have struggled to cancel their memberships with the popular health club during the pandemic, and continue to be charged fees.

Goodlife member Jordan Agutter told InDaily he was debited by the gym this week after trying to cancel his membership during lockdown.

Agutter said he emailed the gym three times in recent weeks trying to receive confirmation his membership would be cancelled, before receiving a response from the gym yesterday advising him to go directly to the direct debit company.

“I got an email on May 28 saying they would be reopening on June 1 and all memberships would be reactivated,” Agutter said.

He said he believed he had been charged 50 per cent of his usual membership fee this week.

Christina Skujins said she also struggled to cancel her South Australian Goodlife membership when she tried to cancel it after seven years.

She said when coronavirus restrictions were put in place she received an email advising her she’d be charged $5 per week as a freeze fee, which was later retracted.

“I sent them about seven scathing emails from the second they sent out the $5 per week email saying I wanted my membership cancelled immediately, and they sent me a form asking me to confirm like a week ago,” Skujins said.

“I tried cancelling my membership and they closed all their front desks and you can’t cancel online.

“I’m super disappointed in them.”

A Goodlife spokesperson told InDaily Goodlife Health Clubs, including the national support office, were closed during the coronavirus pandemic “in line with the Federal Government directive.”

“As a result we did not have the resource to respond to queries from members during this time, however no members were charged throughout the COVID-19 closure,” a spokesperson said.

“Since new regulations were announced, all members in South Australia have been given the option to resume their membership or continue on a time freeze, at no cost. If members wish to cancel the standard procedure applies of speaking directly to your local club.”