The unidentified Indigenous mother was diagnosed with syphilis upon her first antenatal visit at 22 weeks in April. A week after the diagnosis, her baby was born with congenital syphilis, which was declared a “sentinel public health event” by SA Health, the health alert published on Monday says.

“A sentinel public health event is a preventable event that results in the serious harm or death of a patient,” a SA Health spokesperson confirmed to InDaily.

“It indicates that the quality of preventive and/or therapeutic medical care may require improvement.”

The SA Health spokesperson would not comment on the location of the birth, the name of the mother or the exact date due to privacy reasons.

They added the public health alert “reminds and advises health practitioners of their responsibilities” in managing syphilis cases and contacts.

A baby born at 23 weeks is premature and has 20-30 per cent chance of survival without permanent impairment, according to SA Health perinatal practice document.

General practitioner at not-for-profit sexual health service SHINE SA Amy Moten said the case was “significant” because it was an avoidable outcome.

“If we were testing people regularly in pregnancy, if they were attending regular health care appointments in pregnancy, we should actually be able to treat them because it is treatable if detected early enough,” she said.

When detected promptly syphilis is treated with one injection of antibiotics, but if untreated can lead to heart, brain, spinal cord and eye damage, as well as other health issues.

When left too late it is incurable and often asymptomatic.

Congenital syphilis is when the infection is passed from mother-to-child and can lead to birth defects or death of the child. Approximately 40 per cent of babies born to mothers with untreated syphilis are stillborn or can die from the infection as a newborn.

Increased rates of syphilis among young (15 and 29 years) Aboriginal and Torres Strait Islander people was first identified in Queensland in 2011.

The infection spread to other states, with an outbreak declared in South Australia in the Far North and Western and Eyre regions in March 2017. Two years later the outbreak was declared to have spread to metropolitan Adelaide.

The most recent data says there are currently 66 detected cases in the state and since 2016 seven cases of infectious syphilis were detected in pregnant First Nations women.

Nationally there have been 1400 Indigenous recorded cases and four neonatal deaths. 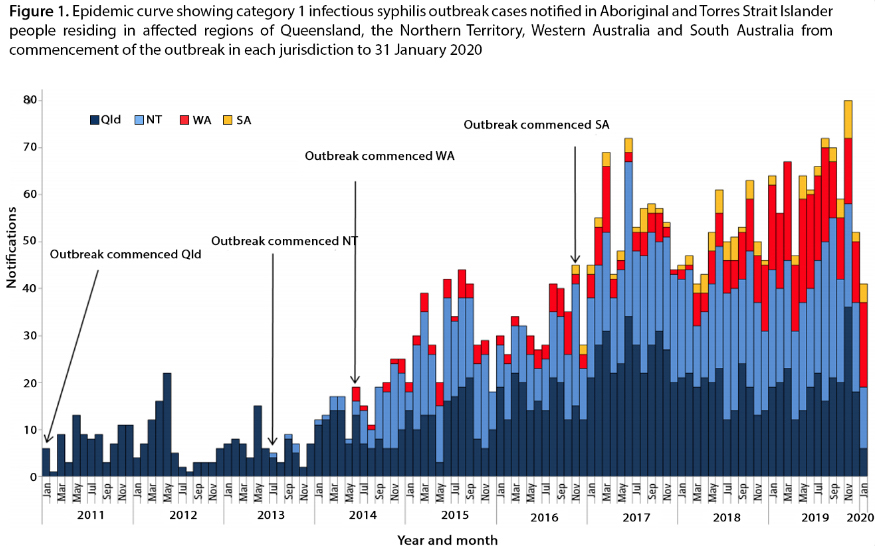 Moten said although the situation in South Australia appears to be improving – “case numbers are looking pretty stable, when compared to last year, they are the same (66), she said – syphilis is still a public health concern as it disproportionally affects Indigenous communities.

“[Indigenous people make up] a small percentage of the population overall in Australia, but they’re seeing really high rates of syphilis per capita,” Moten said.

“There are a number of other health conditions which could be worsened by syphilis and there’s higher rates of transmission potentially again because of lack of education and access to treatment.”

It was headed up by SAHMRI’s infectious disease and Aboriginal health expert, associate professor James Ward, who said this recent case of South Australian congenital syphilis is “cause for concern” because very few cases are diagnosed in Australia.

“It’s important to understand the reasons why this has occurred in South Australia and what we can do better to prevent this from happening in the future,” he said.

“Acquiring syphilis or having undetected syphilis prior to pregnancy is very dangerous for both the mother and baby. Good clinical guidelines exist for clinicians to offer syphilis testing when women first present in pregnancy and throughout.

“This case is also a important reminder for women that good antenatal care is required early and throughout pregnancy to reduce risks for both mother and baby.”

Ward said there has been a “massive amount of work done” over the last few years in South Australia led by key organisations, including SA Health, the Aboriginal Health Council of South Australia, SAHMRI and SHINE SA.

Still a long way from Closing the Gap

But there is often a lag between initial cases and case detection, said Ward, making it easy for disease to be entrenched within a population group and difficult to manage.

“The best thing we can do is to have both community members and clinicians seeking and offering testing, respectively, so we can find and treat cases in a timely manner to reduce poor outcomes in pregnancy and for people with disseminated infection,” he said.

“This approach is often complicated by a set of health and cultural determinants (in any population) that are intertwined and can exacerbate ongoing transmission, such as mobility of populations, number of sexual partners, health care access and availability, education levels, age of first sex ect.

“But we will continue all of our efforts to bring syphilis and other STIs under control in the state.”