The African-American died in Minneapolis on May 25 after a white police officer knelt on his neck for a sustained period after an arrest, despite Floyd saying he couldn’t breathe.

The officer has since been charged with murder, but peaceful protests following the death have spread and evolved into often-violent confrontations, destruction and looting spread across the US, including New York, San Franciso and Los Angeles.

The National Guard have been called out in some cities, while nightly curfews have been declared. 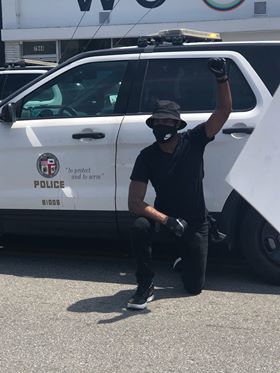 Adelaide expat Shane Connor, an actor who appeared on Australian television series Wentworth and the film Wolf Creek 2, now lives in Los Angeles and told InDaily he was attending a “very peaceful” protest on Sunday when riot police turned up.

He said protesters were chanting and holding placards referencing the Black Lives Matter movement as they walked through a city thoroughfare when the standoff began.

“There was a really family friendly protest in Pan Pacific Park … which is on Beverly Boulevard. It was really chilled and families were there with their kids and dogs,” Connor said.

“People were just chanting ‘no justice, no peace’.

“They were just voicing their opinions, and then some people climbed up on top of a metropolitan bus – but it was just so they could be heard.

“And then, about 15 minutes later, all of these police rocked up in armoured vehicles. They came from all four sides in riot gear – all up I’d say there were about 150 people in riot gear – and blocked everyone in and started firing into the crowd. At first it was gas canisters and rubber bullets and it was totally unprovoked.

“Before that, there was this whole line of police SUVs, which on the news are totally wiped out and damaged. But those SUVs were there before the riot police rolled up and no one was going near them, no one touched them.”

Connor said while he only saw police shooting towards the ground one man was hit by a rogue bullet, but did not appear to be severely injured.

“Suddenly everyone started running, because there was tear gas,” he said.

“I was on a push bike, so I was like: ‘I’d better get out of here.’ But the other thing that you’re thinking is, ‘would I rather get done by tear gas or coronavirus? Because if I run with all of these guys I might get coronavirus but if I just walk I’m going to cop some tear gas’.”

Connor said “it’s as though there are two different groups of people involved”.

“There are all of those people who were protesting peacefully during the day, and when the police rocked up they’ve gone home,” he said.

“And then, what seems to have happened is, there’s this second group of people who have thought: ‘Fuck it. We can take advantage of this.’ And they’ve come in and are looting the shit out of all of the designer stores.

“It’s like this other group of people – who have nothing to do with the protest – have now come in, and they are predominantly white.”

It’s estimated police have arrested more than 2564 people in two dozen US cities, with nearly a fifth of the arrests occurring in Los Angeles.

Connor said he hoped the protests would bring about social change.

“Part of me thinks, ‘this should never have got out of hand’, in terms of the violence that’s happening out there now, had it not got to this level, it would have been a five minute piece on the news in Australia and no one would have taken any notice,” Connor said.