The woman, the state’s first positive coronavirus case in 19 days, had arrived from the UK via Melbourne, where she had served less than a week of a mandated quarantine period.

She was given a compassionate exemption to travel to SA, where she returned a positive test.

The Premier and health authorities today insisted the right call was made, with Marshall saying: “I think we’ve got to have a heart.”

“There are circumstances for compassionate reasons that we’ve provided an ability for people to come to SA, and I think that’s still the right way to go,” he said.

“The police commissioner is the one who provides that exemption and he does that on the advice of SA Health… exemptions need to be handled very, very carefully and in this particular case I think we’ve identified somebody who has the coronavirus and they’ve immediately gone into quarantine – so I think the system has worked…

“We have to put these arrangements in place… they weren’t permitted to come into SA and wander around the public, there was a process in place that’s been followed.”

He denied it was a mistake to let the woman into SA on a plane, saying again “no, look, I personally believe we’ve got to have a heart [but] we’ve got to put strong practices and precautions in place”.

“I’m very grateful that the test was administered and we got a result very quickly, so we’ve been able to avoid a situation where if we had borders like many other countries in the world this person would have been potentially running around infecting a lot of other people… so I think the system has worked here in SA.”

Asked today whether it was a mistake to grant the dispensation, to visit a dying relative, Chief Public Health Officer Nicola Spurrier told ABC radio: “No, I don’t think so.”

However, she confirmed there would be a review of the protocols, particularly as travel restrictions became more relaxed in coming weeks and months.

She later told a media conference there had been 22 compassionate exemptions for international arrivals to SA since the coronavirus crisis began, either to farewell a dying relative or attend a funeral.

“It’s a very, very controlled situation to allow a very small number of people to be at the bedside of a loved one who is dying,” she said.

She said arrivals under these circumstances are quarantined and supervised for the duration of the activity they are given leave to attend, and talked down her earlier assertion that the woman may have had a significant number” of close contacts since arriving at Adelaide Airport.

“We’ve been able to reduce the number of close contacts [and] all of those people, which is again quite a small number now… were advised about the quarantine requirements,” she said.

Health authorities were aware of the positive test late on Monday afternoon, but did not announce it publicly until 3.15pm yesterday, after the Premier had already fronted media discussing measures to re-open the state from the COVID-19 lockdown.

Marshall today said he had not had a detailed briefing about the case before his 11.15am media conference, but conceded “we did understand there was a positive case”.

He said some early positive indications in the past had later proved to be negative, so he did not mention the development when he fronted media in the morning.

But he denied it would impact on plans to fast-track the easing of restrictions in SA.

“We’ve never said at all that all our easing of restrictions were predicated on no new cases,” he said.

As of yesterday, SA has seen 42,614 people enter the state since border restrictions were imposed – a jump of almost 800 on the previous day. Of the known arrivals, 22,261 were considered “essential travellers”. 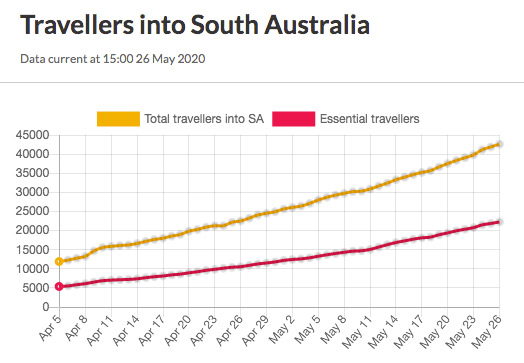 Marshall said the number was “massively” down on the “tens of thousands of people” who would ordinarily be arriving into SA, insisting: “We’ve turned the tap off.”

“My understanding is it’s still between 500 and 700 people per day still coming into SA,” he said, adding around half of those “live on the border” while many more were transport workers delivering goods.

“Every time we’ve granted an exemption we’ve put together a plan which does not allow the person coming to SA to essentially go out into the general public,” he said of the health protocols.

He said he did not have specific details of the reasons for the woman’s visit, but said she “has gone through an extraordinary journey” and “unfortunately with this current situation she won’t be able to fulfil that mission”.

He did say that if granted an exemption to come into SA, “you have to put yourself in an isolated position while you’re here but [would] have an exemption to go and visit that parent”.

“We’ve done that quite a few times, this case is not the first,” he said.

Labor’s Opposition Health spokesman Chris Picton said the Government had more questions to answer, saying: “South Australians have been working hard, doing the right thing and making sacrifices for the good of our state.”

“I feel for the person involved… but I think people in SA want some explanation about why this was allowed to happen without rigorous testing beforehand.”

He questioned the delay in informing the public, saying “the Government found out about this case on Monday and [Marshall] has since held media interviews without talking about what’s happened here”.

The Opposition also questioned why travellers given exemptions weren’t instructed to download the COVID-SAFE app, which the woman had not done in this case.

Marshall said it was a “very legitimate question” as to whether incoming travellers should be better instructed to use the app.