She described the cost as a “huge burden” on taxpayers, businesses and government departments including the SA Housing Authority, which is responsible for maintaining public housing infrastructure.

According to water testing data obtained by InDaily through a freedom of information request last year, Oodnadatta’s non-drinking bore water has, over the past decade, recorded high chloride, sodium, sulphate and total dissolved solid levels.

The hard water has corroded the metal on taps, pipes and air-conditioning units, leaving a white, salt-like residue. 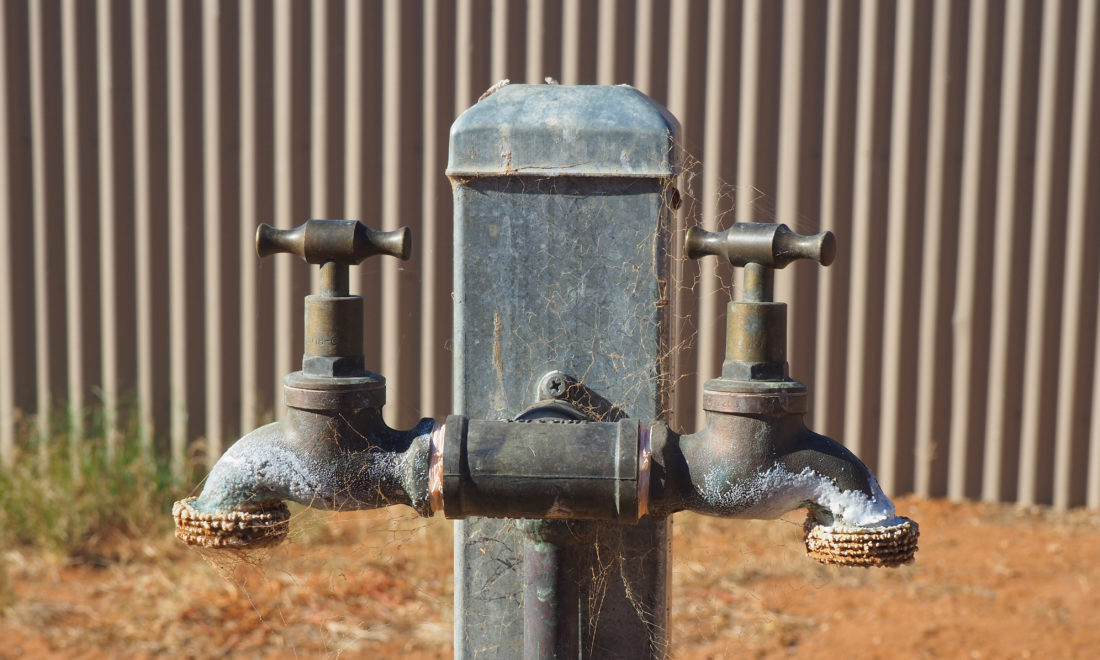 SA Water has warned Oodnadatta residents since the 1990s not to drink the bore water it supplies to houses due to the chemical make-up and concerns that the water has the potential to contain the parasite naegleria fowleri which, when inhaled, causes a rare but almost always fatal brain infection.

The SA Housing Authority has also warned Oodnadatta residents against drinking what it calls “undrinkable” and “unfiltered” rainwater, as the tanks provided at its leased properties are not intended to supply drinking water.

The situation has left residents in the town to choose between drinking the unsafe, non-potable bore or rainwater, or buy bottled water or filtered water from a reverse osmosis plant in the town, which many residents claim is unaffordable.

In her submission to ESCOSA, published this month, Stewart wrote the town’s water situation had remained unchanged “for many years, with many requests being submitted to previous State Governments and SA Water” to improve the water quality.

“Older Aboriginal residents still drink the mains water, which can have serious health effects,” she wrote.

“The effect of the water within businesses and housing causes quick corrosion of pipes, water heaters, washing machines and air conditioning units.

“The result of which is regular replacement costs, which is a huge burden on the householder, business and Government Departments.”

Stewart wrote the town’s poor water quality had also made tourists “reluctant” to stay in the town, prompting a loss in overnight accommodation.

“Future economic development is restricted because of the water quality with business not willing to generate projects that will attract employment, permanent residences and tourism to the Oodnadatta township,” she wrote.

“The basis for Economic Development is a good quality water supply.”

Stewart’s submission comes as the Essential Services Commission looks to hand down its final determination on SA Water’s 2020-24 regulatory plan by early next month.

SA Water prioritised Oodnadatta as the first of 19 communities across the state currently without clean water to receive upgraded treatment infrastructure under the draft plan.

The agency said its customers – not the State Government – were happy to foot the $37.7 million bill to fund the work if it received the go-ahead from ESCOSA.

But ESCOSA rejected the proposal in its draft determination as a “partial solution that provides limited incremental benefits to a small number of customers at a very high cost”.

In his submission to ESCOSA, Aboriginal Lands Trust chief executive John Chester wrote that he had visited Oodnadatta and was “sad to see the (impact the) water crisis is having on the Aboriginal people”.

“There is a ten-year gap in the average life expectancy between Aboriginal and non-Aboriginal people,” he wrote.

“This is often down to preventable measures related to environmental health issues.

“ESCOSA, please step through to the door to change investment by supporting the step suggested by SA Water.”

Chester’s comments were echoed by SA Water Reconciliation Committee co-chair David Rathman, who wrote that Aboriginal people were being “neglected by the system” and their requests for improved water treatment infrastructure had been “largely ignored”.

“It has been disturbing to hear the stories of elders who fear for the future of their people because of decades without potable water,” he wrote.

“Many people speak of dental problems because they can’t use the water and the dangers when extreme summers descend on the people forcing many to drink unsafe water.

“Aboriginal people suffer extreme health challenges (and) amongst our biggest concern in regional and remote areas are kidney disease and cardio-vascular disease.

“As a member of the South Australian community and a proud Aboriginal person I request the Commission revisit its decision and approve the proposal put forward by SA Water.”

In 2018, the Outback Communities Authority (OCA) announced it would install clean drinking water stations in Oodnadatta and nearby Marla, funded by a $53,000 State and Federal Government grant.

In a media release, the reverse osmosis filter stations were touted as providing a “high quality water solution” for when “critical human use is most required”, as well as for tourists, “who want clean water for their camping needs”.

Oodnadatta’s coin-operated station charges $4 for every 20-litres of water – a price residents have described unaffordable on a day-to-day basis.

In response to questions in parliament in September, Human Services Minister Michelle Lensink said that the “intended purpose” of the Oodnadatta water station was “the provision of a drinking water supply to tourists passing through the town, and not to be a primary source of drinking water to the local community”.

In its submission to ESCOSA, the OCA said the $37.7 million price tag of SA Water’s proposal to supply remote communities with safe drinking water was “without doubt a significant number”, but “the dollar value of the proposal must… be tempered by the essential nature of the supply”.

“Water is the very essence of life and a scare commodity in outback SA,” OCA director Mark Sutton wrote.

“The outback communities that stand to benefit from this proposal rely predominantly upon rainwater for their potable needs.

NOT A SAFE DROP TO DRINK: SA town’s water scandal

“The nature of the outback is that rain events are infrequent making reliance on this source a precarious mode of operation.”

“Whilst these stations are low volume output designed primarily for the travelling public, they can, and are being used by community members in time of need e.g. when rainwater is not available,” he said.

“With some modification units such as these could be employed by SA Water to supply remote communities with sufficient potable water to meet the need for human consumption.”

In its submission to ESCOSA, SA Water maintained that the $37.7 million spend to provide safe drinking water to all South Australian communities was necessary.

“Disallowing this project undervalues regional water customers and places them at a disadvantage to metropolitan customers,” its submission stated.

InDaily asked a spokesperson for Water Minister David Speirs whether the group has met or provided any recommendations but is yet to receive a response.