The State Government this week brought forward ‘step two’ provisions allowing seated indoor dining – including the previously-banned service of alcohol – for up to ten patrons inside cafes and restaurants from today.

It followed earlier moves to allow outdoor dining for up to 10 patrons where practicable for restaurant and catering licence holders.

But Premier Steven Marshall has repeatedly insisted the decision to exclude pubs, clubs and a range of other licensed venues was a deliberate bid by his high-powered ‘Transition Committee’ – which oversees the re-opening of the economy from the COVID-19 lockdown – to avoid too many venues reopening at once.

But only hours later – and following several venues being forced to cancel bookings after being told they held the wrong licence – Marshall called a second media conference at 4.15pm to declare that “effective immediately, any establishment with dining capability can also avail themselves of the reduction on restrictions for restaurant and catering licence holders”.

“This has caused some confusion with businesses and also with diners,” he conceded.

“To clear up that confusion, we’re happy to provide a further relaxation of the arrangements in SA – effective immediately…

“Any establishment with indoor dining can have 10 [patrons] indoors and 10 outdoors, and can have service of alcohol with food effective today…

“I hope it clears up the confusion.”

Marshall said the new strictures would apply to any licensed venue with the capacity to serve food to seated patrons – including wineries and cellar doors.

“Plenty of people have told us they won’t avail themselves of it… but other licence holders have said ‘leave that up to us’,” he said.

“I’m not sure how many will take it up – but let’s leave the choice with licence holders.”

Asked what had changed his position between this morning and this afternoon, he said: “I think the continued good results” of no new COVID-19 cases in SA.

Police Commissioner Grant Stevens said he wouldn’t enforce a particular level of food service, saying: “They all know what a meal is – and they all know how to serve alcohol with a meal.”

The announcement came as many restaurants would have been preparing to serve their first inside meal in months, but left others scrambling.

Part Time Lover operator Josh Baker told InDaily the venue had earlier today taken bookings for tonight’s reopening – only to put them on hold when they realised their small venue licence did not allow them to reopen until June 5, when the second “step” of restriction downgrades comes into force.

However, Baker said the venue was now again preparing to open tonight, with the phone running hot as soon as the backflip was confirmed.

“I’m not getting frustrated,” he said.

“This coronavirus has hit the world out of the blue, and the powers-that-be have to make rules on the fly… there’s bound to be some hiccups.

“I’m not upset, I want to make sure first and foremost we’re all safe and abide by the rules we’ve been given.”

Australian Hotels Association SA boss Ian Horne said the “injustice” of bars, hotels and wineries being “excluded” from the easing of restrictions had been “corrected”, saying it would be a “shot in the arm” for many venues, particularly in the regions, that would have been preparing takeaway service for tonight but could now allow patrons to dine on site.

“We’re delighted for that – we’re grateful for that,” he said.

But he added that more detail about trading strictures after June 5 was “the bigger picture”, saying: “We urgently need to know what that looks like.”

The Labor Opposition was scathing, however, with Shadow Treasurer Stephen Mullighan declaring: “South Australians need clear, easily-understandable communication about what is allowed to open and what is not – instead we’ve seen chaos, confusion and cancellations.”

“We have the ridiculous situation where the Government has had three different positions in the space of three days on who can open and when,” he said.

Have spoken to many licensees tonight completely stumped by Premier’s last minute decision to change his mind on opening. One had no beer in the kegs, another no food ordered. This is a shambles and not the way to a safe and ordered phasing up.

Earlier today, Marshall had apologised for the “confusion” caused by the “arbitrary decision” to allow a two-tiered easing of coronavirus restrictions  – a move he said would “incrementally increase the risk” of the disease re-emerging in South Australia.

Several prominent venues – including Peel St Restaurant and 2KW – were excluded because they operate under a different licensing scheme, with many licensed venues including pubs, clubs and small bars unable to re-open for seated dining until Friday June 5.

“There is some confusion, and I would like to apologise for the confusion which has occurred in South Australia with regards to the easing of these restrictions,” Marshall said earlier today.

“As I’ve said from day one, I think it’s a lot easier to put these restrictions in place than remove these restrictions [and] as it turns out, we have various licences in SA, and some patrons have quite rightly asked ‘is this a restaurant? I don’t know their licensing arrangement’…

“So it is confusing, and we acknowledge that – we apologise for that confusion.”

So we booked another restaurant. And they just cancelled our booking after being alerted they have the same licensing issue.

However, he initially stopped short of broadening the criteria allowing seated dining, saying his Government’s “principles-based” approach had to be applied not just on a “venue-by-venue” basis but by assessing the “total risk in terms of aggregate”.

He suggested his ‘Transition Committee’ overseeing the re-opening of the economy from the COVID-19 lockdown – which includes senior government bureaucrats including chief public health officer Professor Nicola Spurrier – was keen to avoid too many venues reopening at once.

“The advice we’ve received from the Transition Committee is that they’re not looking to massively increase dining at this stage, we’re just taking these ‘baby steps’ towards the 5th of June,” Marshall told reporters.

“We were pretty clear from day one it was really about taking those very small steps… you’ve got to draw lines in the sand, and the lines in the sand that we drew were around the different licence arrangements.

“That’s the arbitrary decision that we made to get that incremental additional volume… we’ve worked out that cafes and restaurants often have much lower overheads than the larger pubs, so we’ve had to make decisions and that’s the way we’ve arrived at our recommendation.

Dinner is back on. pic.twitter.com/4N3cwC3vXz

Marshall was speaking at Frome St’s popular Amalfi restaurant, which re-opened today with rotating sittings of 10 patrons at a time in the indoor dining area – which is usually licensed to hold up to 80.

Operator Frank Hannon-Tan said while making a profit “is something we’re always keen to do… the main goal is to stay open, keep staff engaged and make sure the Amalfi restaurant keeps operating and operating well”.

He said the Federal Government’s JobKeeper subsidy would underpin the establishment’s viability in the short term, but is hopeful the number of patrons allowed in his restaurant increases significantly by the time the program ends in September.

“I really, really hope so, because we need turnover – we’re normally licensed for 80 people inside,” he said. 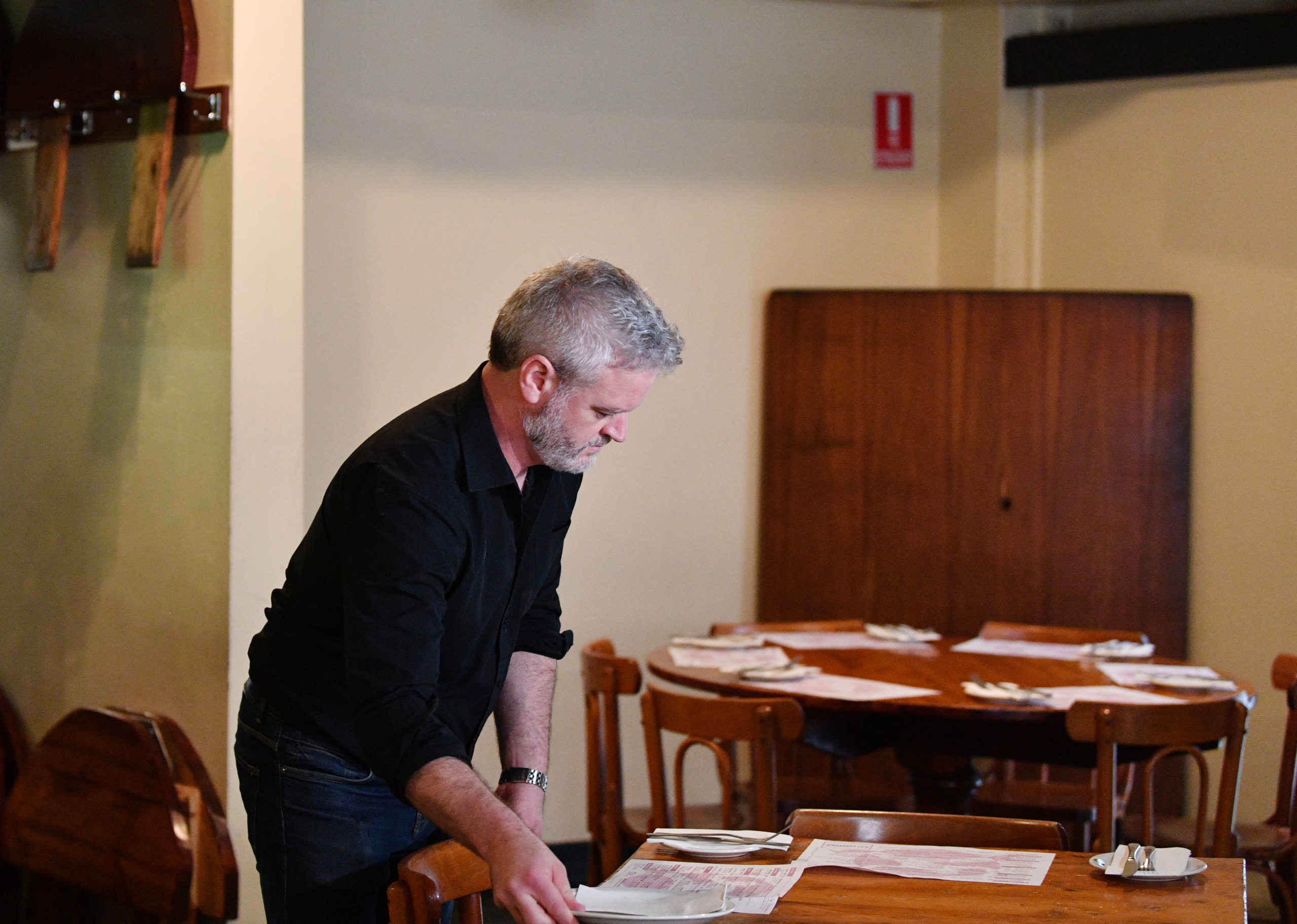 But Marshall said there were no guarantees about if and when businesses would be able to return to their pre-COVID-19 capacity, saying “as soon as we know we can go to that next stage, of course we’re going to”.

However, he has flagged an earlier introduction the “Step Three” broader easing of restrictions in SA, saying “nominally that’s due to be on July 3 but again that may move”.

“What we’re trying to do is lift the restrictions in an orderly way that will keep the coronavirus at bay,” he said.

From today, restaurants and cafes – and now bars and other licensed venues – will be able to accommodate up to 20 patrons at one time – 10 inside as well as the existing allowance of 10 outside, providing they have the capacity to do so.

They must observe the “general rule” of accommodating one person per four square metres, with Marshall clarifying that venues unable to do so will be limited to fewer patrons.

He acknowledged the hotels industry’s frustration with a lack of clarity about what the June 5 restrictions will look like, saying he was still working through requests that larger venues be allowed to accommodate more customers if they can observe the “one in four” rule.

He said that could involve allowing the rule to apply to several “discrete areas” within a single venue.

“I know it’s frustrating, but believe me – the longer we take I think the more concessions we can grant.”

It comes as the NSW government today declared up to 50 people would be allowed to dine in restaurants, pubs and cafes from June 1, with Premier Gladys Berejiklian declaring her own taskforce advised there was “too much confusion in having a further step in the approach” agreed by the national cabinet.