Premier Steven Marshall says SA will be the first state in Australia and among the first jurisdictions in the world to relax restrictions on caravanning and regional accommodation.

From Monday, all country accommodation can reopen, including caravan parks, hotels, motels and Airbnb services.

“We want people to get out and explore our fabulous regions. It is safe for regional travel in South Australia,” he said.

Other restrictions to be lifted across SA from Monday include the return of alcohol-free outdoor dining at cafes and restaurants, and the resumption of outdoor sports training.

Universities and TAFE colleges will be allowed to resume face-to-face learning, public swimming pools, places of worship and libraries can reopen, and open house inspections and home auctions will be permitted.

In almost all cases, numbers will be limited to 10 people at a time and all social distancing provisions will still apply.

However, SA will allow up to 20 people to attend a funeral indoors and up to 30 people outdoors.

It comes as South Australia recorded no new cases of coronavirus infections today, with the state’s total sitting at 439.

SA Health confirmed 433 people or 95.5 per cent had recovered from coronavirus.

There are two active coronavirus cases in the state and one person who tested positive for the virus remains in hospital.

“As we see restrictions being relaxed on Monday, we have already seen that the retail areas around the city are getting busier,” he said.

“Please try and remember to do the right thing and not undo all the good work.

“We still need to bear in mind the importance of social distancing and keeping 1.5 metres away from each other.” 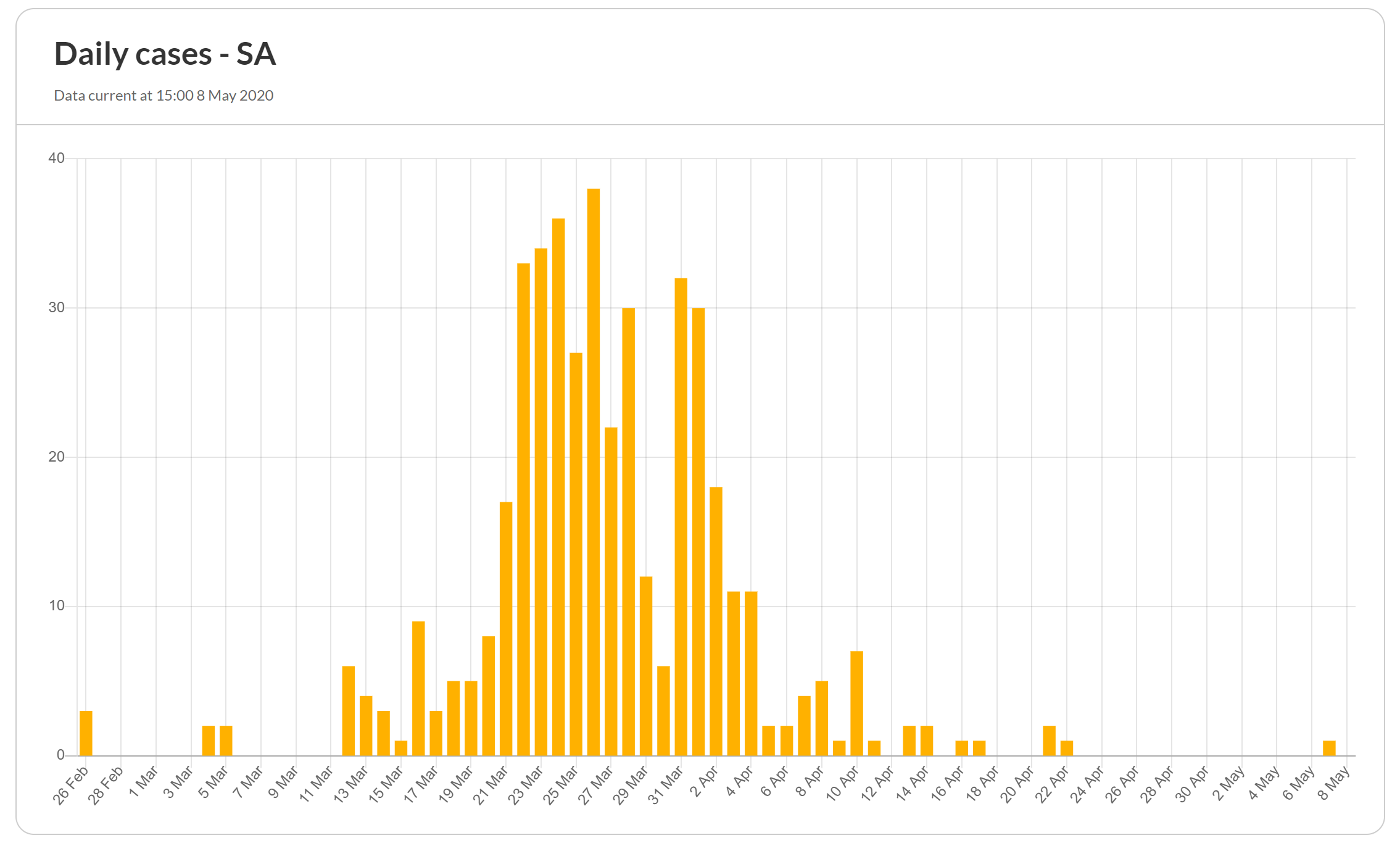 The Adelaide Crows will have to wait to learn details of their penalty from the AFL after breaking South Australia’s coronavirus quarantine protocols.

The AFL club was cautioned by police after a group of players and assistant coach Ben Hart, who were meant to be self-isolating in the Barossa Valley, trained together on Thursday.

The Crows are now braced for a financial sanction from the AFL for breaching the league’s rules which ban training in groups of more than two players.

The AFL integrity unit had hoped to complete its investigation by Friday but it will now spill into the weekend.

Sixteen Adelaide players and assistant coach Hart are at a golf resort in the Barossa Valley to serve a 14-day quarantine period after returning to SA from interstate.

Two groups of eight players trained together on Thursday but the Crows deny they deliberately set out to circumvent AFL coronavirus protocols.

SA Police investigated whether the Crows broke state rules which ban gatherings of more than 10 people.

SA’s Police Commissioner Grant Stevens said under state laws the players and Hart should have remained isolated inside their rooms and not ventured outside.

But police have reportedly opted against further penalties.

“My understanding is it is what you might describe as an honest mistake,” Commissioner Stevens told reporters on Friday.

“It is being dealt with as providing advice and education, and this is no different to what we have done to so many other people who have not necessarily complied with their obligations for quarantining.

“At this point, my advice is they are being dealt with in an educative way rather than a punitive way.”

Australia’s coronavirus road to recovery has been revealed with federal and state leaders deciding on a three-stage plan to restart society.

The final phase is expected to be implemented in July, with states and territories to move at different paces on lifting restrictions.

State premiers and territory chief ministers have the power to pick and choose which rules to change in coming months.

Prime Minister Scott Morrison said the plan would get 850,000 people back to work when fully implemented.

Victorian Premier Daniel Andrews will not lift any restrictions until at least Monday, refusing to apologise for his hardline approach.

“This is a pandemic, this is not a popularity contest,” he said.

NSW is also cautious, holding off on any announcements, while NT, WA and SA have moved to adopt many of the stage one measures from the national cabinet guidelines.

Tasmania is easing restrictions gradually, but Queensland is moving more rapidly to allow dining in pubs and clubs for 10 people at a time from May 16.

There have been 6900 confirmed cases in Australia, with 97 people dead.

Daily infection rates remain low and there are fewer than 1000 active cases.

“Please, keep that distancing. We could lose the battle that we have won so well so far,” he said.

Professor Murphy believes hand washing and no longer soldering on to work while sick are two permanent changes to come from the pandemic.

Aide to US VP Pence has coronavirus

US Vice President Mike Pence’s press secretary has the coronavirus, the White House says, making her the second person who works there known to test positive for the virus this week.

President Donald Trump, who publicly identified the affected Pence aide, said he was “not worried” about the virus spreading in the White House.

Nonetheless, officials said they were stepping up safety protocols for the complex.

Pence spokeswoman Katie Miller, who tested positive on Friday, had been in recent contact with Pence but not with the president.

She is married to Stephen Miller, a top Trump adviser. The White House had no immediate comment on whether Mr Miller had been tested or if he was still working out of the White House.

Katie Miller had tested negative on Thursday, a day before her positive result.

“This is why the whole concept of tests aren’t necessarily great,” Trump said. “The tests are perfect but something can happen between a test where it’s good and then something happens.”

Prime Minister Boris Johnson will not announce any dramatic changes to Britain’s coronavirus lockdown on Sunday, adopting a cautious approach to try to ensure there is no second deadly peak of infections, his environment minister says.

Johnson is due to announce the next steps in Britain’s battle to tackle the coronavirus following a review by ministers of the current measures that have all but shut the economy and kept millions at home for over six weeks.

“You have to be realistic there isn’t going to be dramatic overnight change, we will be very, very cautious as we loosen the restrictions,” George Eustice said at a daily Downing Street briefing on Friday.

“As the data that we’re outlining on a daily basis shows, we are not out of the woods, there are still major challenges with this virus.”

Britain overtook Italy this week to report the highest official death toll from coronavirus in Europe.

WHO urges testing, tracking and isolating

Countries must return to “basic principles” of public health surveillance if they are to bring the coronavirus outbreak under control, the World Health Organisation’s top emergency health expert says.

The WHO, which said it is facing a $US1.3 billion ($A2.0 billion) funding deficit for its effort to tackle COVID-19, issued the call for more surveillance as many countries including the United States, Switzerland, Mexico and Germany have turned their efforts toward re-opening economies battered by the pandemic.

Mike Ryan, head of the WHO’s health emergencies program, said during a media briefing from Geneva that all countries should focus on the fundamentals of the global coronavirus fight: scouting potential new infections, hunting them down, confirming them and then separating those afflicted to save others from the disease.

“We seem…to be avoiding the uncomfortable reality that we need to get back to public health surveillance,” he said.

“We need to go back to where we should have been months ago – finding cases, tracking cases, testing cases, isolating people who are tested positive, doing quarantine for contacts.”

WHO director general Tedros Adhanom Ghebreyesus’ concerns over a funding crunch come after US President Donald Trump last month told his administration to temporarily halt funding to the United Nations health agency. US officials are demanding a WHO overhaul, saying it mishandled the coronavirus crisis.

WHO’s Ryan on Friday urged people to stick together as the disease spreads from country to country, sometimes at different rates and with wide swings in death tolls.