As speculation about the embattled institution continued today, Independent Commissioner Against Corruption Bruce Lander released a bombshell statement, confirming: “I have commenced an investigation in respect of allegations of improper conduct by the Vice-Chancellor of The University of Adelaide.”

“I am also investigating the manner in which the University dealt with those allegations,” he wrote.

“The University has committed to providing full cooperation with my investigation. I do not intend to comment further on the nature of the allegations.”

Lander said he would “ordinarily not confirm or deny the existence of an investigation because the legislation under which I operate is predicated upon investigations being conducted in private”.

“Similarly any persons aware of an investigation being undertaken by my office are constrained as to the information they are able to disclose,” he continued.

“However, in light of the intense speculation regarding The University of Adelaide, and the likelihood that that speculation will continue and potentially lead to an unnecessary negative impact on the University’s operations, I have decided to make this public statement.”

Lander emphasised that “the fact of my investigation, which has only just commenced, must not be construed as a finding that any person has engaged in impropriety”.

“That will be a matter for findings at the conclusion of the investigation,” he said.

“Secondly, my investigation is in respect of potential issues of serious or systemic misconduct and maladministration, not corruption.”

He said he was exercising the powers of the Ombudsman Act 1972 to conduct this investigation.

“That legislation requires that the investigation be conducted in private and I must comply with that legislative requirement.,” Lander said.

“Again I will adhere to that requirement.”

He said he would not comment further until the inquiry was concluded.

The university has previously rejected any “suggestion of financial impropriety” in relation to the events of this week.

Deputy Chancellor Catherine Branson today emailed staff and students about Lander’s statement, saying: “While it is natural for us to want to know more about what is happening, we need to remember that this is a matter for the ICAC.” 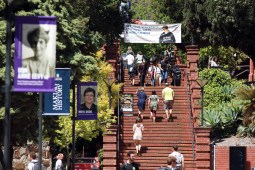 “As you will know, the law places restraints on what can be said about an ICAC investigation… this is why the University is not able to comment further,” she wrote.

“For nearly 150 years our University has made a major contribution to the development and prosperity of South Australia. Over that time it has been consistently ranked in the top 150 universities world-wide.

“The University will continue to excel and deliver high-quality teaching and research well beyond this time.

“The University Council and I have full confidence in the leadership of Acting Vice-Chancellor Professor Mike Brooks and his senior management team.”