InDaily has confirmed that the matter is the subject of an inquiry, with the Planning, Transport and Infrastructure Department advising it was being “investigated in line with policies of the public sector”.

It comes after InDaily revealed last month that “project and program implementation specialist” Ray Partridge, appointed in February as the Government’s new State Planning Reform Director, had continued to work in the DPTI Adelaide office after flying in from his Sydney home two days before state border restrictions were formally enforced amid the coronavirus pandemic.

His arrival coincided with Premier Steven Marshall’s assertion that “it’s really important we send a very clear message, if you’re coming to SA you must commit to two weeks of self-isolation”, with the Premier also noting “most employers are already doing the right thing in encouraging people that don’t need to be in the office to stay home and work from home”.

DPTI previously told InDaily its staff “across all business areas are working flexibly between the office and remotely where practicable, balancing the needs of the business with measures including social distancing and increased work site sanitation to provide a safe working environment”.

The agency said Partridge “has worked in the office since his arrival, as he arrived prior to the requirements for self-isolation [and] is considered an Essential Traveller under the Emergency Management (Cross Border Travel) Direction”.

It’s understood Partridge returned to Sydney last week, with the department confirming in a statement he was “working flexibly, as was always intended, and in accordance with ‘essential worker’ requirements of the state’s outbreak response”.

But in an email apparently authored by Partridge and sent to DPTI CEO Tony Braxton-Smith and Planning executive director Sally Smith – the contents of which have been seen by InDaily – Partridge claims he instructed other staff they were not permitted to work remotely for social distancing purposes, and details how he sacked one contractor on the spot after she objected to the instruction.

Planning Minister Stephan Knoll has consistently refused to further delay the rollout of the scheme, which has already been pushed back by three months to the end of September.

“As you would be aware the SA Planning Reform Program is facing a number of challenges to ensure a successful delivery of the Phase 2 implementation by July 2020,” the email states.

“An area of particular importance is the need for on-going rigours [sic] testing of the e-Planning system as each cycle of the development is completed.”

Partridge tells Braxton-Smith and Smith he asked the Testing Work Stream Manager “how best to optimise the testing effort over coming days and weeks” and “it was suggested and agreed that having the full testing team on site would be the most efficient and effective way of testing the latest iteration of the e-Planning system”.

“It is important to note that half the testing team currently do work on site at 50 Flinders St – the intention was to bring the full team together to optimise the testing effort,” the email states.

“The Testing Work Stream Manager convened the remote meeting which was delayed until all participants could join – and hence commenced at 6pm” on the Thursday before the four-day Easter long weekend.

“On commencement of the meeting (attended by four testers, the Testing Work Stream Manager and myself) I stated we would need those working remotely to start working on site from next week.”

He claims that “before I could explain and position the situation any further” a contractor “interjected and peppered me with questions and continued to speak over me for some time, despite my attempts to let her know I had not finished”.

“I repeatedly asked her to stop, mindful of how important it was that the discussion be managed carefully and appropriately,” the email continues.

“Taken back [sic] by what I believed to be extreme rudeness and disrespect I asked her to leave the call… she continued to carry on so I advised her that ‘that was it – you’re gone’.

“I believe she then told me to ‘go and get f-cked’.

“I then told her she was fired.”

However, the email concedes “the conversation was fairly rapid so it maybe [sic] that she responded that I could ‘go and get f-cked’ after I told her she was fired”.

“Either way it did not end well,” he continues.

He adds “it is important to note that we did not get to a point in the discussion where we discussed if she would or would not come on site from Tuesday”.

“At that point I asked the rest of the team to please be on site from Tuesday 9am and asked if they had any questions,” the account continues.

“I also said that if they were not on site on Tuesday we would need to have a serious conversation.

“As a result the meeting was over very quickly.”

A separate email sent by an anonymous source on April 11 to several senior executives – including Braxton-Smith – raised concerns about staff being instructed to attend the office in person after the Easter long weekend, rather than working from home and offered a differing account of the same incident, arguing the contractor “raised a question and asked ‘we were earlier told to work from home and now you want us to work from DPTI office’ as she was concerned about the health and wellbeing of herself and her team”.

“This was not an unfair question, any normal employee would ask the same question in these unprecedented times,” the anonymous email argues, requesting that Braxton-Smith “start an independent investigation for this incident”.

Partridge’s account says after the meeting he “took a walk around the floor for 15 mins and came back and sat beside the Testing Work Steam [sic] Manager” who made him aware that the “on-line chat” had continued “for up to 30 minutes after the conversation ended”, with the sacked contractor still present.

“I then phoned her employment agency… provided them with a brief synopsis of the situation [and] advised we were terminating her employment and would pay two weeks in lieu of notice,” he writes.

“This is my fullest and sincerest recollection of the situation.”

It’s understood that a day after InDaily last month revealed the instruction to planning workers to attend the office rather than work remotely, new signage appeared throughout the DPTI offices (pictured below) reminding staff to observe social distancing, with sections of the floor space taped off as boundary markers.

An email from Sally Smith was also sent round to staff on the day the article was published, advising staff to adhere to restrictions limiting the number of attendees at physical meetings on-site and limiting the duration of meeting times. 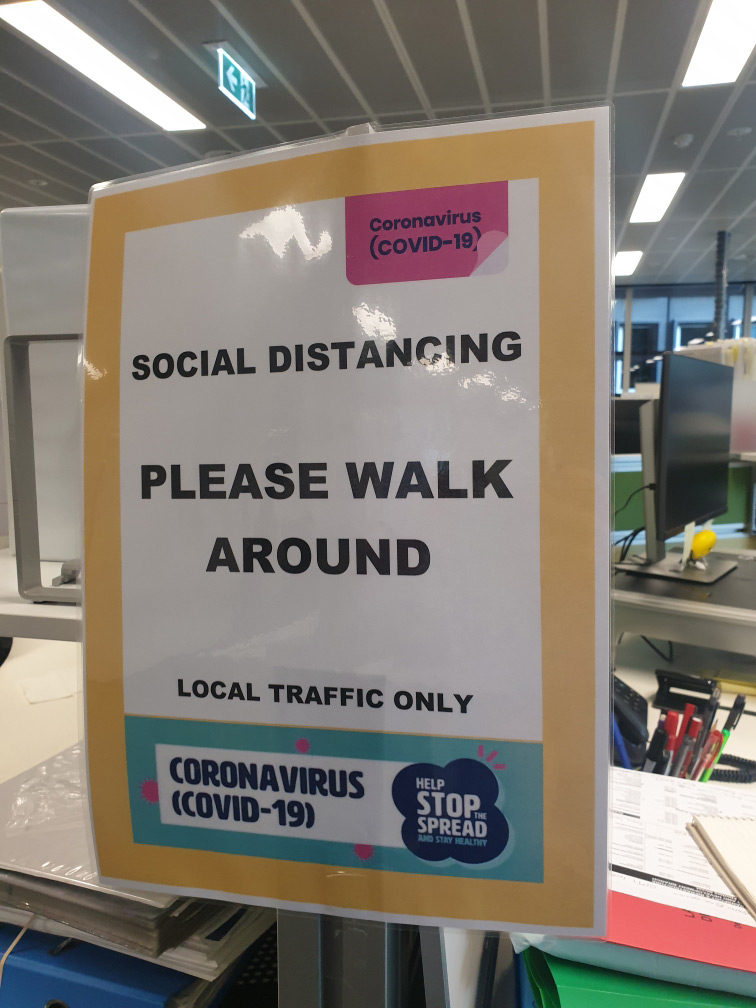 Neither Smith nor Planning director Anita Allen responded to direct inquiries from InDaily.

In a statement, the department said Partridge “continues to lead the delivery of the e-Planning system, which is on track with final technical testing well underway in partnership with councils and industry partners”.

“Can DPTI confirm that it is investigating a claim relating to Mr Partridge sacking a contractor during a teleconference, after the employee raised concerns about being instructed to attend the office rather than working remotely?

“Has the Commissioner for Public Sector Employment been informed of the situation, and is she also investigating?

“Is the Department comfortable with Mr Partridge’s claim in a letter to the CEO that he told staff if they did not attend the office in person ‘we would have a serious conversation’?”

The department responded: “The matter is being investigated in line with policies of the Public Sector. No further comment will be made.”

In relation to Partridge’s whereabouts, it earlier told InDaily “flexible working arrangements are deployed across all sections of the department enabling personal presence or remote access as determined by business or project requirements at any point in time”, but “no further comment will be made with respect to individual personal circumstances”.

The Liberal Party has previously been scathing about senior bureaucrats based interstate, with the then-Opposition taking former Premier’s Department boss Don Russell to task in 2016 for commuting to SA from his Sydney home.

“Having someone who flees… to go back home each weekend just isn’t good enough,” now-Treasurer Rob Lucas told The Advertiser at the time.

“We want someone in that key role who champions the state and understands its issues… we need someone who lives the state’s problems.”